Exhausting journey: Tai (second right) asking for directions to the new terminal. He and his family had taken a wrong turn after alighting from the ferry and ended up at the old terminal. (Left pic, from left) Nisha Seeni Packir and Varahala stopping to catch their breath after the long walk and climb down the stairs from the ferry terminal.

FERRY commuters are crying foul over the lack of facilities at the new Temporary Transport Terminal of Penang Sentral (TTTPS).

Elderly couple Saw Chan Kee, 77, and his wife, Woo Lee Yong, 70, from Perlis expressed shock that the terminal was not user-friendly.

“I’m suffering from back pain, hypertension and minor heart problem and need to seek medical treatment at the Loh Guan Lye Hospital on the island every month.

“Here, we’ve to carry our luggage up the stairs because there are no elevators or lifts. Furthermore, the distance to the bus terminal is very far,” said Saw.

He added that he had to walk about 50 steps up the staircase now before he could board the ferry.

Nisha Seeni Packir, 49, who works as a kitchen helper in a restaurant in George Town, said the previous temporary terminal was better than the present one. 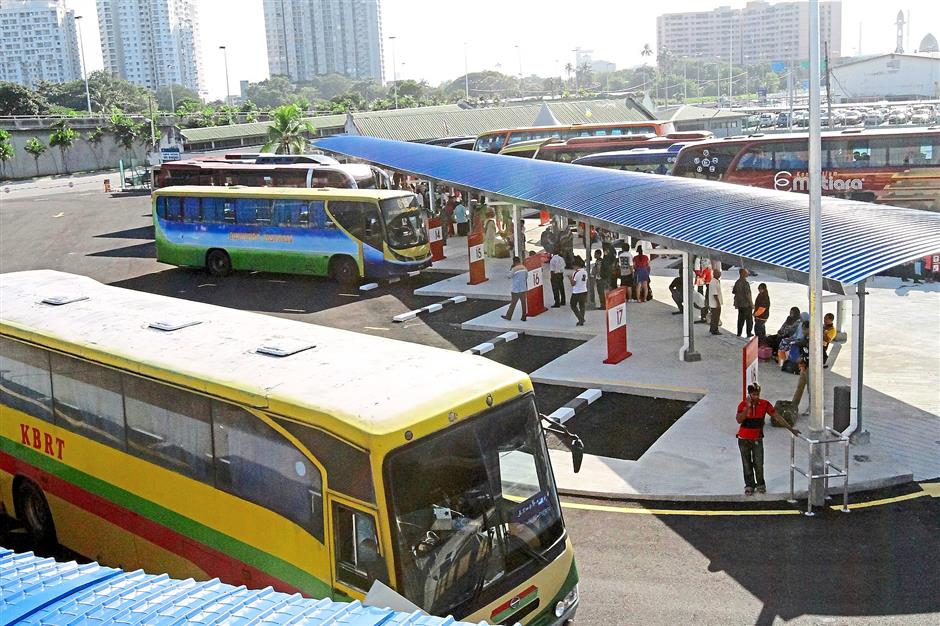 Teething problems: Commuters waiting to board buses at the new temporary terminal of the upcoming Penang Sentral transport hub on the first day of operation in Butterworth. Photos by ZAINUDIN AHAD


“They should ensure the facilities are adequate in a new building. In this case, there’s none,” she lamented.

T. Varahala, 62, from Sungai Petani, Kedah said she felt giddy after walking up the staircase to board the ferry.

“I’m returning home after my monthly appointment at the Penang Hospital. I have been fasting since last night.

“Previously, I could get onto the bus after coming out from the ferry but now, I’ve to walk a long distance,” she said.

Another commuter Tai Sheng Wu, 64, a tourist from Taiwan, complained of a lack of proper signage to guide the public.

“We took a wrong turn and ended up at the old terminal because we could not find any signboard to direct us along the way,” he said.

Tai was coming from the Penang island and on his way to Lumut, Perak, with his family.

Consumers Association of Penang research officer S. Ganesh who was also at the terminal said many walking passengers had complained to him about the new bus terminal.

“To reach the ferry ticketing counter, one has to walk about one kilometre, then go up the stairs about 50 steps and down again.

“You also have to walk past a steep ramp,” he said.

Ganesh added the authorities failed to remove the old signboards which were misleading to the public.

Penang Sentral is an urban development with mixed components built around the largest integrated transportation hub in the northern region.

In a statement dated Jan 9, MRCB said bus and taxi operators would shift to the new temporary site and commence services on Jan 13.

It said there would be 28 bus platforms and 33 ticket counters together with a taxi stand, a surau, an information counter and toilets.

An MRCB spokesman had said that the relocation was to make way for the construction of the permanent integrated Transport Hub Terminal, which is the first phase of the Penang Sentral project.

The completion of the transport terminal is targeted for the first quarter of 2017.