Accolades and bouquets at end of challenging journey

Beautiful achievements of graduates from KDU Penang when had a cherished moments after they received their scrolls during the 21st graduation ceremony held at the Equatorial Hotel Penang, yesterday. (Nov 02)

HARD work pays off for 813 graduates of KDU Penang when they received their scrolls during the 21st graduation ceremony held at the Equatorial Hotel Penang.

“Today is a day of recognition for your hard work and commitment. I’m happy that so many of you are graduating in the various fields,” he said in his speech.

The valedictorian from School of Engineering, Science & Technology, Lee Paik Jen, 22, thanked her parents and family for their support in obtaining her degree.

“I enjoy studying as my classmates and lecturers are very supportive.

“My deepest thanks also to The Star Education Fund which provided me with funding last year,” said Lee who graduated with first class honours in Electrical and Electronic Engineering recently.

“They employed me after I finished my internship,” said Lee who then headed to Taiwan to present her conference paper to the International Conference on Software Intelligence Technologies and Applications.

“My journey in KDU was exciting and challenging. I’m glad to be given the opportunity to develop my communication and leadership skills, and learn to socialise and work in a team.

“My aim is to raise awareness on people with disability,” he added after receiving his scroll.

After the ceremony, the students later had their photographs taken with their families, friends, lecturers and fellow graduates. 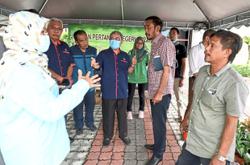