Carefree morning: A group of students enjoying the breeze while cycling along Armenian Street in George Town.

BICYCLE-rental operators are being innovative to remain competitive in the booming cycling tourism industry in George Town.

The Leaf Bicycle Rental manager Chiang Kee Chuan said he came up with three tailor-made cycling trips for his clients to explore the city on wheels.

He said he would act as the tour guide for cyclists who could choose either a road trip to check out the murals and heritage buildings in George Town, a trip to cycle around Balik Pulau town area or a trip to Queensbay Mall from George Town.

He said each person would be charged RM38++ per trip, which included a meal, a helmet and a lock, before embarking on the four-hour cycling journey.

“All my clients will also be provided with personal accident insurance coverage,” he said when met at his bicycle rental outlet in Gat Lebuh Pasar.

“With me as the guide, at least they will get some insight into the history of certain places. This is the extra service which I hope can help the tourism industry here.

“Otherwise, cyclists will be wandering aimlessly in the city,” he said.

The bicycle is either a three-seater or a six-seater with a steering wheel. It is also equipped with a horn and signal lights.

“We received overwhelming response for this kind of bike, especially during weekends and public holidays.

“Tourists will ask for something different, instead of the normal bikes or tandem bikes.

“This kind of tour bike is suitable for families with children in tow to tour the city.”

He said the tour bicycles were available for rent at RM100 for three hours in Weld Quay. 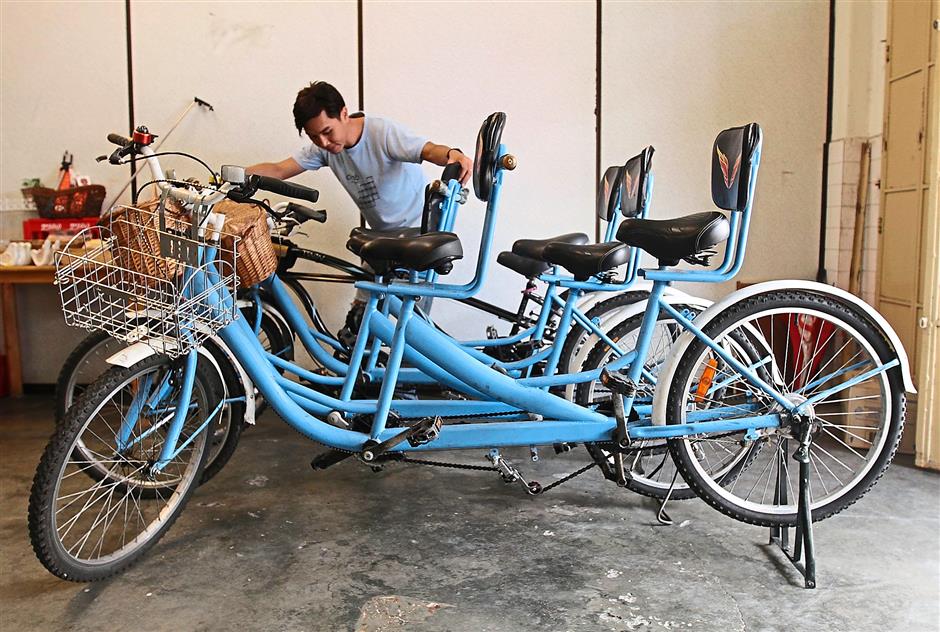 Safety-conscious: Chiang checking the brakes on his tandem bicycles at his outlet in Gat Lebuh Pasar.

“But nowadays, business is a bit tough and challenging as there are easily more than 50 bike rental operators here.

“This is why I am charging only RM8 per bike to stay in business,” he said at his shop in Armenian Street.

A group of college students seen cycling in George Town said they enjoyed the morning breeze.

“We love the places here. The murals are the best and they are aplenty,” said Munirah Hajat, 22.

Her friend Miera Aspirana Joheel, 20, said they felt safe on the streets as the motorists were careful.

“They always slow down and give way to us on the narrow roads,” said the dental care student.