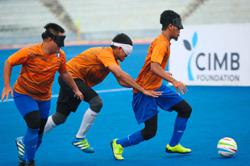 Malaysia lost 0-2 to Japan’s national blind football team after a sluggish first half.

IT WILL be an uphill task for the Malaysia five-a-side blind football team to score a medal at the International Blind Sports Federation (IBSA) Blind Football Asian Championships in November.

Since all practice sessions for the past two years were halted by the Covid-19 pandemic, the national team only resumed training in February and is struggling to regain its momentum.

With only about three months before the international tournament in Kochi, India, from Nov 9 to 11, the team needs to make it to the top three.

This is because only three countries will qualify for a spot in the 2023 IBSA World Games, which will be held in the summer next year.

National blind football coach Sunny Shalesh said that with new additions to the team, the players needed to improve their physical fitness and tactical skills while on the court.

“Some of the players have dropped out because of age or reduced fitness after contracting and recovering from Covid-19.

“We have to scramble and assemble our grassroots development players to step up for the national team.

“We are trying to have as much training as we can,” he told StarMetro after two days of training and friendly matches with Japan Blind Football Association (JBFA) at the Tun Razak Hockey Stadium in Kuala Lumpur.

Both Japan and Malaysia’s team sparred and trained together with their national teams and national youth teams before a final friendly showdown with both countries sending their best players into the field.

Malaysia had a sluggish first half of the game and Japan took advantage of it to score a goal.

The local players picked up momentum in the second half, but Japan’s defence was impenetrable.

Sunny said the matches were part of the team’s preparation for the Asian Championship and a chance for the new players to experience a real game with a team from another country.

“Winning was not on my mind.

“The players did well as we either drew or lost one or two goals to Japan in several other matches.

“Most importantly, these two days exposed our weaknesses and we need to learn new tactics in preparation for the international games,” he said.

Sunny also said that following the training with Japan, eight players and two goalkeepers would be selected to represent Malaysia in the Asian Championship.

“This is the second time we have had friendly matches with Japan. Now, we can gauge our players’ levels,” he added. Malaysia’s goalkeeper attempting to deflect the ball shot by the Japanese team.

Sunny says players will have to train harder for the Asian Championships. 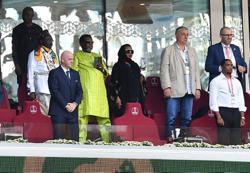