Looking at the positives, Mahinda Vallipuram is happy with the way things are despite the pandemic.

IN THE wake of his re-election to the International Cricket Council (ICC) as an associate member director, MetroSport spoke to Mahinda Vallipuram in a wide-ranging interview.

In it, he touched on a number of things, including what it meant to him personally and Malaysia as a whole.

Mahinda said he was “humbled” by the vote of confidence and that he was mindful of the task that laid ahead.

“I also look forward to working with ICC chairman Greg Barclay and the board members in building a sustainable global strategy.

“I am thankful as well for the support received for my re-election to the ICC Board.

“Being re-elected together with associate member (AM) directors Imran Khwaja and Neil Speight gives me the confidence of seeing our common aspirations for cricket to grow positively, ” said Mahinda, who is also president of Malaysian Cricket Association.

“I believe we can and we must provide targeted assistance to high-performing AM countries, grow participation globally, encourage the growth of women in cricket and especially develop the sport at grassroots level globally to ensure a sustainable future.”

Commenting on what he would be striving for most during this new (two-year) term of office, Mahinda said: “Besides working with the (ICC) Board on global strategy and reviews, I particularly would like to work on the inclusion of cricket in multi-sports arenas...in the Olympics, Commonwealth Games, regional and sub-regional events.

“This is a priority for the associate member agenda.

“The inclusion of cricket in multi-sports events provides opportunities for much-needed exposure, additional pathways, working with national sports councils, working with the respective national Olympic Councils, access to funding, as well as participation and fan engagements programmes within these countries.

Turning to just how difficult the pandemic had been and how it had affected cricket, both locally and internationally, Mahinda said: “The last nine months have been trying and cricket too has been badly affected.

“All major (local) tournaments have had to be halted. However, we are grateful to the National Security Council as well as Youth and Sports Ministry for allowing us to restart national training in June and national tournaments in August.

“We started the MCA T20 Super Series and have four matches to be played to complete the competition, ” he added.

“Unfortunately, we were unable to conduct face-to-face in-classroom training for the entry and intermediate levels.

“Normally these are conducted for two to four days, comprising classroom and on-field training, ” said Mahinda.

He said that because cricket was a technical sport, match officials too needed to be constantly updated, but this too had been halted.

“In addition, two tournaments, two Asian Cricket Council events and two bilateral series (men’s and women’s) had to be postponed. And, this has impacted both cricket and income levels.”

But amid these trying times, he said there were positives.

“As the adage goes, ‘Difficult roads lead to beautiful destinations.’ Our new road leading to new destinations is the number of online training sessions that we have had and continue to conduct.

“Using these online modules, we have reached a nationwide audience.

“We have run online quizzes and competitions, engaging with the fans to create and extend fan engagement exercises.

“Externally, we worked on a fundraising project with Women’s Aid Organisation (WAO) themed ‘Girls for Goals’.

“We are particularly proud to assist WAO in raising much needed funds and awareness.

“But the biggest single influencer in 2020 for Malaysian cricket is having Sime Darby Foundation (YSD) on board as a partner and sponsor.

“Malaysian cricket is honoured to announce its collaboration with Sime Darby Foundation, as a recipient of RM4.6mil under the foundation’s sponsorship programme for the development of cricket at the grassroots.

“The sponsorship is aimed at developing the Cricket Adiwira Programme and the Women’s Development Programme.

“As the beneficiary of YSD’s sponsorship, Malaysian cricket edges closer towards its vision ‘to be a major sport in Malaysia’.

“I would also like to place on record that we are appreciative of the contribution from the sports division of Education Ministry, state Education Departments and National Sports Council.

“The Education Ministry officers, technical chairman and the teachers have been great in developing the game; they are full of passion and commitment.

“Without them, it will be difficult to build participation and ensure sustainability.

“It is good that cricket is included in Sukma and we can see how the state associations have benefitted.

“The state cricket associations are now working in tandem to grow the game and we see these as positives for long-term sustainability and development, be it high performance or grassroots participation.

“I am certain that eventually we will get there. Everyone is part of the cog, ” added Mahinda. 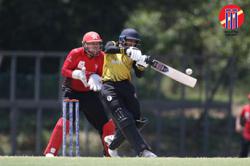