An arts space with a reputation for championing freedom of expression honours five people who have gone above and beyond in the pursuit of free speech this year.

FOR the past year or so, arts hub The Annexe Gallery at Central Market in Kuala Lumpur has been busy with an art bazaar called Art For Grabs during which independent vendors gather to sell all manner of arts and crafts, from homemade jewellery to framed amateur photos.

The bazaar started on quite an ad-hoc basis, according to the gallery’s programme director Pang Khee Teik. “It has been quite successful and we plan to have them at least three times a year in future,” he enthuses.

Seizing the opportunity to reach a captive audience lured by retail therapy, Pang put together a variety of educational outreach events spanning art house film screenings and public lectures and forums to edgy, alternative exhibitions that run concurrently with the bazaars.

These outreach programmes had socio-political themes and featured heavyweight intellectuals – such as history scholar Farish Noor, indie filmmaker Amir Muhammad, and playwright Jit Murad, to name a few – who chaired forums on a wide array of themes, from debating local films to alternative sexualities.

“It’s a good way of bringing people together to hear about political issues because we do attract many who come to browse at the stalls at Art For Grabs. We want to offer them more than just shopping,” says Pang.

The fourth instalment of Art For Grabs at The Annexe Gallery that took place last Sunday also had a socio-political agenda.

“We were going about planning another forum, and as we were going through a list of names to invite, we realised that the list was full of inspiring people who have been champions of freedom of expression in the country.

“So we decided we should honour them,” explains Pang.

And so “The Annexe Heroes Awards” was born. Pang writes in a press release: “As we provide a democratic space for artists and audiences to express themselves in a country where freedom of expression is a contentious issue, we look to these heroes for inspiration.”

But this is The Annexe Gallery, known for its iconoclastic nature from the moment it opened its doors last year, so its awards show bore no similarity to other events of this type.

There was no blaring fanfare nor was there the usual glitz and glamour associated with the giving of awards; no lavish dinner, no expensive hotel venue. Instead, it was a low-key event, and a casual and informal mood was the order of the day, punctuated by laughter and chatter from bargain hunters in the adjacent Art For Grabs marketplace.

And the trophy was appropriately simple yet telling: a stainless steel dog tag (of the military kind) engraved with the name of the award’s recipient – to commemorate their battles in the trenches for free speech, one assumes.

Awards host Pang presided over the event, introducing the award with a disarming mix of acerbic humour and casual confidence, and then spinning the ceremony into a public forum during which the five Heroes shared their views of this year’s incidents when freedom of expression was an issue, and also their wishes and aspirations for the coming year.

Personal accounts of the Heroes’ struggles and their recent activities came to the fore in the forum.

For instance, women’s and migrants’ rights activist Dr Irene Fernandez, 62, spoke about how she felt when she was acquitted from a charge of publishing false news with her report Abuse, Torture and Dehumanised Conditions of Migrant Workers in Detention Centres. The charge had been hanging over her since 1995: “I cried because of the struggle of 13 years fighting the charge against me.”

She also expressed hope in the country in having the liberty to speak up: “There is a refuge of hope that we’re moving!” and encouraged the public to be involved in politics, as “politics are in our lives and we have to be aware how it affects us”.

Similarly, playwright Kee Thuan Chye (who is an associate editor at The Star and editor of the Mind Our English section) expressed how he “never have cried so much” as on the day of the March 8 General Election.

“(The breaking of Barisan Nasional’s two-third majority) is something I’ve waited for my whole life,” said the author of March 8: The Day Malaysia Woke Up, which documents the events that led to the General Election results and also interviews other writers, politicians, and bloggers for their views on the event.

Kee, 54, also recounted the staging of his recent play, The Swordfish, Then the Concubine during the Singapore Theatre festival earlier this year: “Who knows if the play will be allowed here,” he laughed, alluding to the political themes in the work. 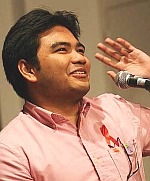 There was also a highly personal moment when twentysomething blogger and raconteur Hafidz Baharom shared the heart-wrenching experience how he told his parents about his sexual identity – and received their open acceptance.

Apparently, Hafidz has an ever-growing audience for his writings at the virtual social network, Facebook. He also shares frank opinions on issues such as racial and gender politics and the National Service at thenutgraph.com. 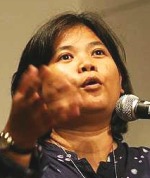 Another “hero under the radar” is Yati Kaprawi, 42, who explained the role of education in women’s rights in SIS (sistersinislam.org.my), and how the organisation encourages women from all walks of life to engage in the debate on Muslim issues: “The fact is, the makciks can be very vocal too, speaking out about their right to certain issues such as maintenance (spousal support or alimony). They feel the men should step up and if not they should be really punished,” she explained.

Yati also pointed out that just because individuals are not ulamaks, that does not mean they cannot give or have their own opinion about Islam.

“We are citizens and we have some level of religious knowledge, too. So, why shouldn’t we speak up about a fatwa we don’t agree with?” she asked, alluding to the recent controversy about the fatwa on yoga and “tomboy” dressing. 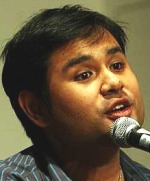 Last but not least was Shanon Shah, 30, who has added acclaimed playwright to his singer-songwriter skills while fighting for humans rights.

His story of how he resigned from Amnesty International so that he could assist his friend and activist, the late Toni Kassim, was quite an eye-opener into how a person must always fight for his or her principles under all sorts of circumstances.

Shanon also shared an anecdote of how he became a journalist at new, independent news website thenutgraph.com, and how he learnt the art of political journalism.

To name the event an awards night seems misplaced and even facetious because of some of the tongue-and-cheek antics of host Pang. However, the idea of spotlighting everyday heroes who fight for freedom of expression – indeed who fight for any sort of justice – is a brilliant idea. Instead of an annual event, The Annexe Heroes event should be a monthly programme highlighting the heroes among us, enlightening us about their activities and personal journeys.

There is something very appealing about listening to the personal narratives of these high achievers, and even more compelling are the journeys and experiences of their struggles.

While it is, of course, always good to be informed of socio-political issues from proponents, we make a deeper human connection with these activists as they tell their stories in the flesh, rather than seeing them as headline news or front page pictures. It makes their struggles a reality when you hear their voices, see their smiles or frowns, and sense their body language.

The fact is, there is no need for another award or award ceremony for unsung heroes. There is a need, however, to understand the efforts of tireless activists, to aspire to their tenacity and conviction in their fight for issues close to all our hearts.

For more information on the activities and exhibitions at The Annexe Gallery, go to annexegallery.com.

Part of the Dec 21 ‘Art for Grabs’ event was the ‘Tomboys & Angels Fashion Show’; catch it at malaysiakini.tv/video/16526 (you don’t have to be a subscriber to watch the video).

The Annexe Gallery’s next event is an exhibition of antique Tibetan furniture (Jan 1-March 31) organised by the Art House Gallery Museum of Ethnic Arts; the museum will be launched on Jan 1 on The Annexe’s first floor.