I’D like to report the case of a few missing bodies in the 1980s. This episode didn’t make spectacular headlines, but it was, nevertheless, a pivotal case in local art history, for figurative studies disappeared from Malaysian art education for a brief period.

A policy of Islamization (part of the National Cultural Congress of 1971) excluded this vital skill and the focus switched to geometry, arabesques, and repeating motifs – archetypal design elements that define Islamic art. 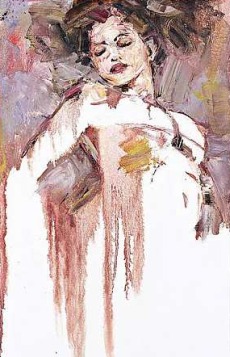 This is not to say that figurative art did not exist in Malaysia at all during that period – quite the contrary, in fact. Mohd Hoessein Enas (1924-1995) and (now Datuk) Chuah Thean Teng (b. 1912), for example, produced some stunning works in the mid-20th century.

And, correspondingly, there are many examples from international artists, from the Futurists’ distorted and mechanized figures of the early 20th century to more recent sculptural works by English artist Antony Gormley (b. 1950).

Figurative works should not only be seen as an indicator of artistic merit or the artist’s technical prowess. Indeed, the works produced by the examples listed above bear little resemblance to actual people and are certainly incomparable to the finesse in sculptures of the Classical period. But what they do offer us is the opportunity to gain insight into both national and personal histories.

The Futurists’ works inform us of the rallying (if slightly perturbing) call to arms by a small group of Italian artists set around their ardent desire to break from tradition and embrace machines and new technology.

His solitary figures on Crosby Beach, for example, highlight the vastness of Nature, man’s increasing isolation from it, and the bleak future that awaits us if this connection isn’t re-established. These images resonate powerfully at a time when one of the top selling DVDs in many countries is former US President Al Gore’s documentary on global warming, An Inconvenient Truth.

These are only two examples, but they underline the importance of figurative works in art. Figurative works allow viewers a peek at history, and the chance to understand the present, and they furnish us with dialogue to create the future.

Through these works, we explore identities, stylistic “-isms” and thoughts, and the artist’s interpretations become windows for us to grasp a better notion of ourselves.

Individually, they present variegated interpretations of what it means to be us, today. 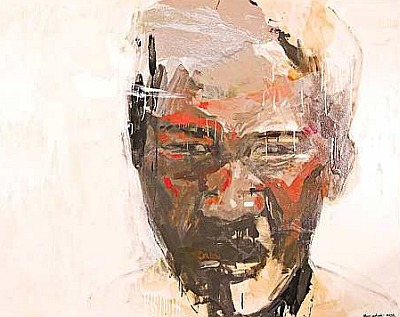 Hamidi Hadi’s two self-portraits explore the subject of identity. In Melt, his figure looms like a ghostly presence amidst mottled swabs of light-blue paint. Facial features aren’t defined in this painting, but appear more concrete in Berbahang, where bright red cheeks glow like embers. What exactly is unsettling the figure?

Could it be Hamir Soib’s painting? The Scrotum is, after all, likely to ruffle a few straight-laced feathers. In the rich, sepia-toned painting, a figure holds a paintbrush and paints that typifying male feature, a scrotum, in place of a discernable face, suggesting the role of the artist in creating his own identity and, visually, being master of his own mind, body, and soul.

The explicit subject is a commentary on the censorship that dictates production of imagery in Malaysia. The Scrotum tackles this matter with balls (my apologies – the pun was irresistible), as does Jolly Koh’s provocative coupling in The Kiss I and II.

The myriad scenes from films that lie on the editing floor after a vetting from our censorship board, the cleavages masterfully hidden via digital technology all leave little doubt that, through conventional channels, our viewing of mind, body, and soul is a highly regulated affair.

Both Chong Choon Woon and Marvin Chan portray the female figure, calling attention to its increasing idealisation in the media and societal expectations of how women are meant to look.

Umi Baizurah’s work, on the other hand, is an exercise in semiotics, as the human figure is absent altogether. In its place are a variety of symbols depicting the artist’s raw interpretation of the theme. The central object – what appears to be a mechanical bird on wheels – hints at her artistic practice of creating ceramic sculptures.

More symbols surface in Ahmad Shukri’s monochrome painting, where the shadowy figure of an artist’s wooden mannequin takes centre stage. Tubuh Dalam Jiwa – loosely translated as The Body in the Soul – can be said to be emblematic of the artist himself. Schools of fish traipse across the canvas, while a tiger juts from behind the mannequin, representing both might and Malaysian identity.

The word halal (meaning permissible or lawful according to Islam) makes a cheeky appearance in Jawi in the lower right-hand corner of the painting. The inclusion of this word is poignant in light of the absence of figurative painting within the context of our local arts education.

It also seems to be a remark about the pressure we face to always be on our best behaviour and to do things properly and lawfully.

How we correspond to our environment is rendered in Chin Kong Yee’s Seville, a vertiginous depiction of the Andalusian city, while Kim Ng’s six-panel piece, reminiscent of a storyboard or a series of events narrated pictorially, highlights the solitariness of city life; the canvases with the male figure are sparse and his surroundings – the architecture – appears fractured. 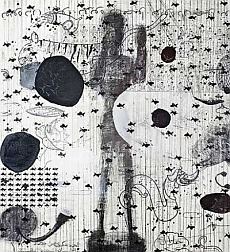 As we struggle with increasing responsibility, it is easy to picture ourselves very much like the figure in Ng’s paintings.

There may have been a historical hiccup in figurative painting in the late 20th century in Malaysia, but an exhibition like this makes amends for that.

These artists have collectively produced a body of work that is both effervescent and representative of our contemporaneous identities. It is an exciting visual experience for viewers, and there is little doubt that some among these artists will have their names added to the evergrowing list of seminal figurative artists in Malaysia.