Women travellers represent one of the fastest-growing segments within the Muslim travel market. — FAIHAN GHANI/The Star

Malaysia has maintained its position as the top halal travel destination in the world. The country came first again in the list of top 'Muslim-Friendly Destination of the Year (OIC)', according to the MasterCard-CrescentRating Global Muslim Travel Index (GMTI) 2022.

Malaysia has held the top position since the launch of the index in 2015. Turkey, Saudi Arabia and Indonesia took joint second position this year.The GMTI monitors the overall performance of the Muslim travel market.

Tourism, Arts and Culture Minister Datuk Seri Nancy Shukri said the country is honoured to be named the top Muslim-friendly destination once again.

"We remain dedicated in advocating for Muslim-friendly tourism and hospitality in the local and global scale," she said during her keynote address.

ALSO READ: Malaysians travelling abroad during Ramadan: When to fast, where to pray?

Nancy also highlighted the importance of sustainable tourism during the event, which was broadcasted virtually.

"Ultimately, in this day and age, tourism isn’t just about making travellers feel good, but it’s about the transformative potential of tourism to everyone who has a stake in this industry – everyone from the tourist, the investor, the industry player, the community, the government, the country, and more," she said.

According to Nancy, Islamic tourism reflects the values of sustainable tourism."It promotes sustainability in many forms, from economic, social and spiritual sustainability to environmental, cultural and heritage sustainability," she said.

The index was revealed in conjunction with the Halal In Travel-Global Summit 2022 that was held in Singapore recently.

MasterCard and CrescentRating reported that prior to the pandemic, the Muslim traveller market exhibited a strong growth with 108 million Muslim travellers in 2013, jumping up to 160 million in 2019. Fazal warned that the growth of Muslim travel could be disrupted by several global events that are currently taking place. — CrescentRatingThe latest GMTI report revealed that this market is expected to pick up again now that global borders are reopening, with a forecast of 230 million Muslims travelling by 2028.

In Malaysia, the Muslim traveller market contributed to 5.3 million international arrivals with an expenditure of RM16.72bil in 2019.

CrescentRating founder and chief executive officer Fazal Bahardeen, in the report's foreword, warned that the momentum could be disrupted by several global events that are currently taking place.

"This recovery process is fragile and could be disrupted by the continuing war in Ukraine, fuel price increases, and other health threats such as the emerging monkeypox or Covid-19 variants," he said.

However, Fazal remained optimistic about the global growth of Muslim travel.

"We stay optimistic that economies will recover soon from the pandemic’s damage to lives and livelihoods. Moreover, as the travel industry gears up for quarantine-free international travel, we believe the Muslim travel sector could contribute immensely to accelerating the recovery," he said.

He added that it's important for stakeholders to focus on key drivers that will propel the halal travel market forward in its next development phase.

"Gen Z, millennials, and women are the most influential and growing demographic within the Muslim population. 70% of the estimated population of two billion are under 40 years with Gen Z and millennials representing 50% of the population."In addition, women travellers represent one of the fastest-growing segments within the Muslim travel market. They make up around 45% of the global Muslim arrivals," he explained.

The GMTI 2022 also noted that meaningful travel in the Muslim travel space is gaining momentum, as younger Muslims are looking for personal development while exploring the world.

"The importance of giving back to the community and protecting the environment to conserve natural resources is fundamental to the objectives of the faith. In addition, the lockdown during the pandemic and the damage it did to the lives and livelihoods has further increased the awareness of being community and socially conscious even when traveling," the report said.

“Muslim travellers now seek meaningful and transformative experiences that will hopefully contribute to their growth as human beings upon returning to their homeland," he said.

And destinations should respond accordingly to these new needs of Muslim travellers.

"Destination managers could create value for this particular group of Muslim tourists by offering them to sign up for volunteer programmes at the destination they are visiting, mingle and socialise with the local community and get themselves involved in activities like going to religious classes and joining community clean up programmes,” he explained.

"With the rise of environmental sustainability, businesses must look beyond developing personalised travel experiences, and consider how they may incorporate sustainability in their offerings.

"Asia Pacific is renowned for its popularity with Muslim travellers. As queues and crowds once again become a familiar sight at airports, it is important to look at the changing nature of travel, and the shifts in the demographics of Muslim travellers due to the rising influence of Gen Z, millennials, and women," he said.

"As travel starts to take off again, it appears to have taken on a new meaning – people don’t just want to see the world, but rather, they want to experience the world," he said.

Malaysians travelling abroad during Ramadan: When to fast, where to pray?

Malaysia is the top Hari Raya destination for Singaporeans

Malaysian woman takes leap of faith by travelling during Ramadan 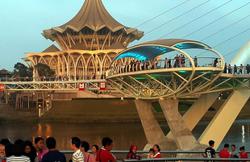 How a hotel satisfaction promise has led to more discontent
For some Americans, Europe is the best budget-friendly place to visit this year
If you're a Lego fan, you should visit its birthplace in Billund, Denmark
Malaysian experiences a zen-like moment at a magical temple in Japan
Kampung Laut Heritage Site in Kelantan is open to visitors
New Rwandan eco-tourism park restores urban ecosystems in the city
Why Malaysians should visit Jeju, South Korea's idyllic holiday island
7 attractions in France where Malaysians can avoid the Paris crowd
Paris wants to get tourists onto bikes and away from major sights
Achieving carbon neutrality at a beach club in France