The pool deck of the Seven Seas Splendor, which made its maiden voyage in Britain and Northern Ireland last month. — JODIE HART/Regent Seven Sea Cruises

While the cruise sector is very slowly picking up pace in Malaysia, some major cruise companies around the globe are seeing a boost in business and bookings.

Oceania Cruises, for one, recorded an all-time high for a single-day booking recently for its Vista vessel, which is only slated to sail in April 2023. Bookings opened on Sept 15, and by the end of that day, the company had already hit this year’s all-time high in sales.

“The tremendous wave of bookings we saw on the day we opened sales for Vista underscores the extraordinary demand for our acclaimed small ship, destination focused vacations,” said Bob Binder, president and CEO of Oceania Cruises, in a statement.

The most in demand destinations were the British Isles and Canada, the Mediterranean, the Holy Lands and Panama Canal. Oceania Cruises has seven luxury ships that are smaller than most of the cruiseliners available today.

Helmed by Captain Diego Michelozzi, the inaugural sailing circled Britain and Northern Ireland with ports of call at Edinburgh (Scotland), Belfast (Northern Ireland), and Liverpool (England). This was followed by another 14-night voyage to Barcelona, stopping at France and Portugal along the way.

The cruise company’s Seven Seas Explorer will begin sailing this week from Trieste, Italy, while Mariner will start in December from Miami, Florida in the United States. Another two ships will sail in the first quarter of 2022.

Elsewhere, the 54-year-old Norwegian Cruise Line floated out its latest vessel Norwegian Prima last month from her drydock at Marghera in Venice, Italy.

The float out marks the completion of the vessel’s external works and painting, which includes a striking artwork on the hull designed by Italian graffiti artist Manuel Di Rita, or Peeta.

Norwegian Prima is currently being fitted with its interior furnishing, including guest accommodations and public spaces. The ship is scheduled to start sailing in the summer season of 2022.

“A ship’s float out is always a significant milestone, but this one is particularly special,” said Harry Sommer, president and chief executive officer of Norwegian Cruise Lines, adding that this is the company’s 18th ship, and was build in partnership with Fincantieri.

While sales for the Prima is not open to the public yet, there is reportedly already some interest building up among loyal cruise enthusiasts. 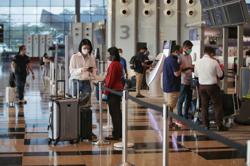