Going for the thrill of adventure tourism in China

A daredevil taking on the challenge of walking on a tightrope atop Canton Tower in Guangzhou, China. — AFP

Walking tightropes, rappelling down a four-storey-high rope tunnel, sitting in a dangling basket 58 floors high – tourists have been steeling their nerves for adrenaline-filled challenges in a new assault course at the top of China’s tallest TV tower, the Canton Tower.

Thrill-seekers in Guangzhou are rewarded with a rare panoramic view of the cityscape along the Pearl River through the steel structure of the tower, with a sweeping night breeze to break the stifling heat of the southern city.

Wearing helmets and a harnesses, tourists can scramble and climb between the distinctive twisting metal structure, accompanied by a coach who shouts instructions while demonstrating techniques to go through each challenge, pausing occasionally to find the best position to take photos for the challengers.

“I’ve never had a more exciting experience anywhere, ” a glowing Peng Xin said, wiping sweat from his brow after finishing the challenge on the 33rd floor, 198m off the ground.

“I came here mainly to challenge myself and get a taste of new things, ” he added.

Costing over RMB80mil (RM51.9mil) and taking over a year to build, the Landmark Alpha adventure park opened in January this year on the 600m-high Canton Tower.

Adventurers in Guangzhou spend up to RMB688 (RM447) per person on a single course in the tower.

“The coaches gave very detailed and thorough instructions, ” one adrenaline junkie named Li said after jumping off a ladder on the 58th floor.

China’s mega structures have come under scrutiny after a towering skyscraper in the nearby city of Shenzhen swayed without explanation and was evacuated in early May.

However, Li said: “The safety measures are good. It is only under this precondition that we can fully enjoy the challenge.”

The adventure park typically welcomes two to three hundred tourists during public holidays – but not all have the courage to finish the full challenge.

“I thought I was brave enough to do it, but my legs just gave out, ” confessed one ashen-faced climber, retracing her steps along a rope tunnel. – AFP Relaxnews 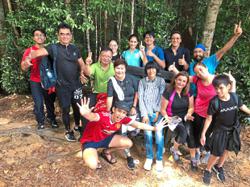 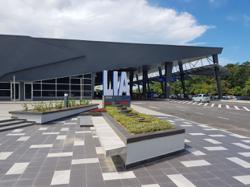