Malaysia certainly has no shortage of spectacular bridges. One of the most iconic if of course, the Penang Bridge. — AARON LEE/Unsplash

There is a certain kind of poetry about bridges that has always captivated Anooja Rai. She likes that it is a form of connection.

She reckons that is why thought-provoking or monumental scenes often take place on bridges in movies. Sometimes, bridges also take on a metaphorical turn.

“Like in Frozen 2 where Elsa finds out that she’s the bridge connecting to all the elements, ” Rai says with a laugh.

Fiction aside, Rai likes to spend some leisurely time at a bridge just for the scenery. When she was still a college student, she would make night trips from Petaling Jaya, Selangor to Putrajaya with a group of friends to marvel at the bridges there.

“My friends and I like to admire the night scenery from a bridge. It was a very calming experience, ” she says, adding that the bridges in Putrajaya are very uniquely designed. CNN named the Seri Wawasan Bridge as one of “the world’s most amazing bridges”. — MOHD SAHAR MISNI/The Star

Rai’s opinion is also substantiated by CNN when it named the Seri Wawasan Bridge as one of “the world’s most amazing bridges”.

“An absolutely gorgeous bridge design. This one gets in on beauty points alone, ” CNN wrote in the 2017 report.

Malaysia certainly has no shortage of spectacular bridges. One of the most iconic if of course, the Penang Bridge.

Although it’s not an official sightseeing spot, the Penang Bridge is instantly recognisable to many visitors to the island. On travel review sites such as TripAdvisor, there have been queries about where to get the best panoramic view of the bridge. The first drawbridge in South-East Asia, which connects Kuala Terengganu and Kuala Nerus, was a sensation when it first opened in 2019. — MOHD NASIRUDDIN MOHD NASIR/Unsplash

Over in Terengganu, there’s also a bridge that is worth discovering. The first drawbridge in South-East Asia, which connects Kuala Terengganu and Kuala Nerus, was a sensation when it first opened in 2019. Other notable bridges in the country include the Langkawi Sky Bridge (Kedah), Sungai Johor Bridge (Johor), Saloma Link (Kuala Lumpur) and Tan Kim Seng Bridge (Melaka).

Rai hopes to check out the Kuala Terengganu Drawbridge, and many other unique bridges in Malaysia, once it is safe to travel again.

Her next goal after that would be to visit some of the most famous bridges around the world.

“Given the chance, I would love to visit iconic bridges such as the Sydney Harbour Bridge in Australia and the Brooklyn Bridge in the United States, ” Rai says.

“Visiting bridges is also a good way to travel on a budget since you can visit them for free, ” she says. Rai, however, insists that she would not visit glass bridges.

Recently, a man in in China was left dangling from a 100m-high bridge after its glass panels were damaged. Several pieces of the glass floor were blown away by strong winds that reached up to 150km/h.

It’s reported that China has about 2, 300 glass bridges which were designed to attract thrill-seeking tourists. Videos of people trying to cross some of those bridges go from incredibly funny to spine-tingly scary.

While bridges might not seem like the most obvious motivation for travel, “bridge spotting” does have its fair share of fans as evident by the presence of the #bridgespotting hashtag on social media.

Many people post photos of the connecting structure against other buildings or the sunset/sunrise.

We track down some of the most spectacular and stunning bridges around the world. Perhaps they can serve as inspiration for your next travel, once it is safe to do so.

Instantly recognisable by its bright orange colour (it is painted weekly in “international orange” by over 20 painters), the Golden Gate Bridge has been referred to as one the seven wonders of the modern world. This is because the suspension bridge was once notorious for being called “the bridge that couldn’t be built”. The Golden Gate Bridge is instantly recognisable by its bright orange colour. — Pixabay

The structure opened in 1937 after a four-year struggle against treacherous tides, strong winds, fog and rocks. Today, the Golden Gate Bridge gets over 10 million visitors a year and is a must-visit for visitors to San Francisco. (Alcatraz Island, another popular tourist attraction in the city) lies about 10km from the bridge.

Visitors can go under the bridge, fly above or cross over it. For most people though, it’s all about capturing that Instagram shot. You can marvel at the bridge from Fort Point, Baker Bridge and Marin’s Vista Point.

In the afternoon, the bridge is usually enveloped by heavy fog and disappears from view.

The title of the world’s longest suspension bridge belongs to the Akashi Kaikyo Bridge, with its length of almost 4km. The bridge which opened in 1998, connects the Kobe and Awaji Island. One of the best ways to experience the bridge is by walking the Maiko Marine Promenade. It is essentially a circuit of walkways that are located under the platform of the bridge. Visitors would be able to see the bridge’s unique interior as well as the Akashi Strait and Osaka Bay from the walkway.

For bridge enthusiasts, there’s even an exhibition centre at the foot of the Kobe site. Here is where one can get detailed information about the planning and construction of the bridge, as well as other top suspension bridges around the world.

The largest steel bridge in the world also happens to be one of the most photographed landmarks in Australia. In fact, mention Australia and most people would immediately associate it with the Sydney Harbour Bridge (and kangaroos, of course). Mention Australia and most people would immediately think of the Sydney Harbour Bridge. — Tourism Australia

The bridge opened in 1932 and is affectionately referred to by locals as the the Coathanger. More than just a popular tourist spot, the structure has been instrumental in connecting the central business district and the North Shore.

A popular activity here is the bridge walk – where you walk to the top of the archway – which offers a spectacular panorama.

Another great way to see the bridge is from a ferry. Take a ferry from Circular Quay past the bridge and the Sydney Opera House to Taronga Zoo, Manly/Watsons Bay.

Movie and TV fans would recognise this hybrid cable-stayed/suspension bridge in New York from the countless Hollywood productions that it has “guest starred” in. Stretching across the East River, the bridge connects the boroughs of Manhattan and Brooklyn. 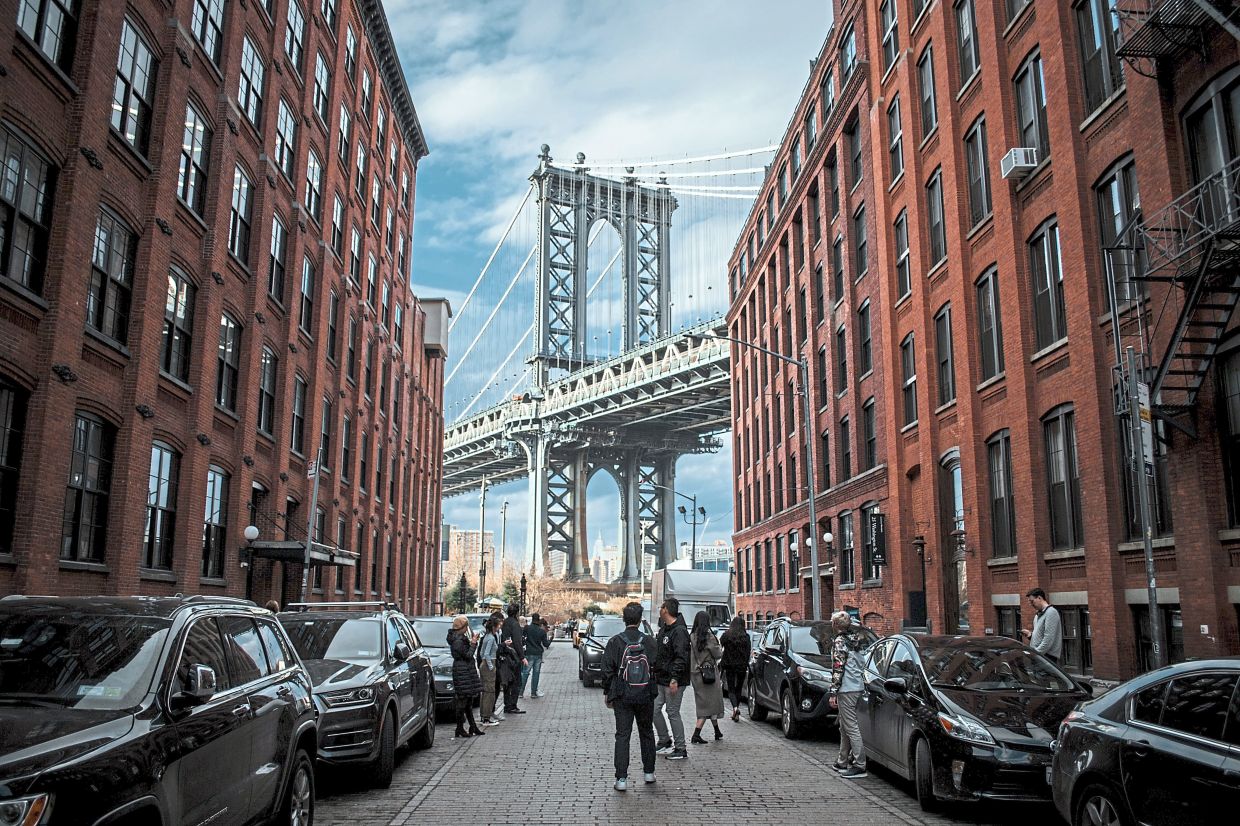 A stroll across the elevated pedestrian walkway here will provide visitors with a true New York City experience. Crossing the bridge would present pedestrians with numerous photo opportunities.

Look out for beautiful vistas of Manhattan, the East River and the waterfront (but be sure to stick to the pedestrian lane as many bicycles zip past the bridge daily).

You would also get to see the Statue of Liberty from the bridge. If anything, walking across the Brooklyn Bridge is a quintessential experience for travellers to New York.

Opened in 1894 by The Prince of Wales (later King Edward VII), the Tower Bridge is a combined bascule and suspension bridge in London. The structure, one of England’s most famous landmarks, stretches across the Thames river. While its exterior (which evokes a sense of Victorian London) is impressive enough, visitors need to step inside the bridge to truly enjoy the remarkable venue. An exhibition inside the Engine Rooms showcases modern day stories of the bridge. There are also guided tours available.

Many visitors would time their visit to coincide with the lifting of the bridge. Tower Bridge lifts around 800 times a year for passing vessels. Some iconic ships that have passed through include the Royal Yacht Britannia (which brought Queen Elizabeth II home from a Commonwealth tour) in 1954 and the speedboat Max Power which carried David Beckham during the London 2012 Olympic.

With an illustrious history dating back to the Roman period, the Ponte Vecchio has definitely stood the test of time. But one might say luck is partly responsible for its enduring structure – it is the only Florentine bridge that survived World War II. 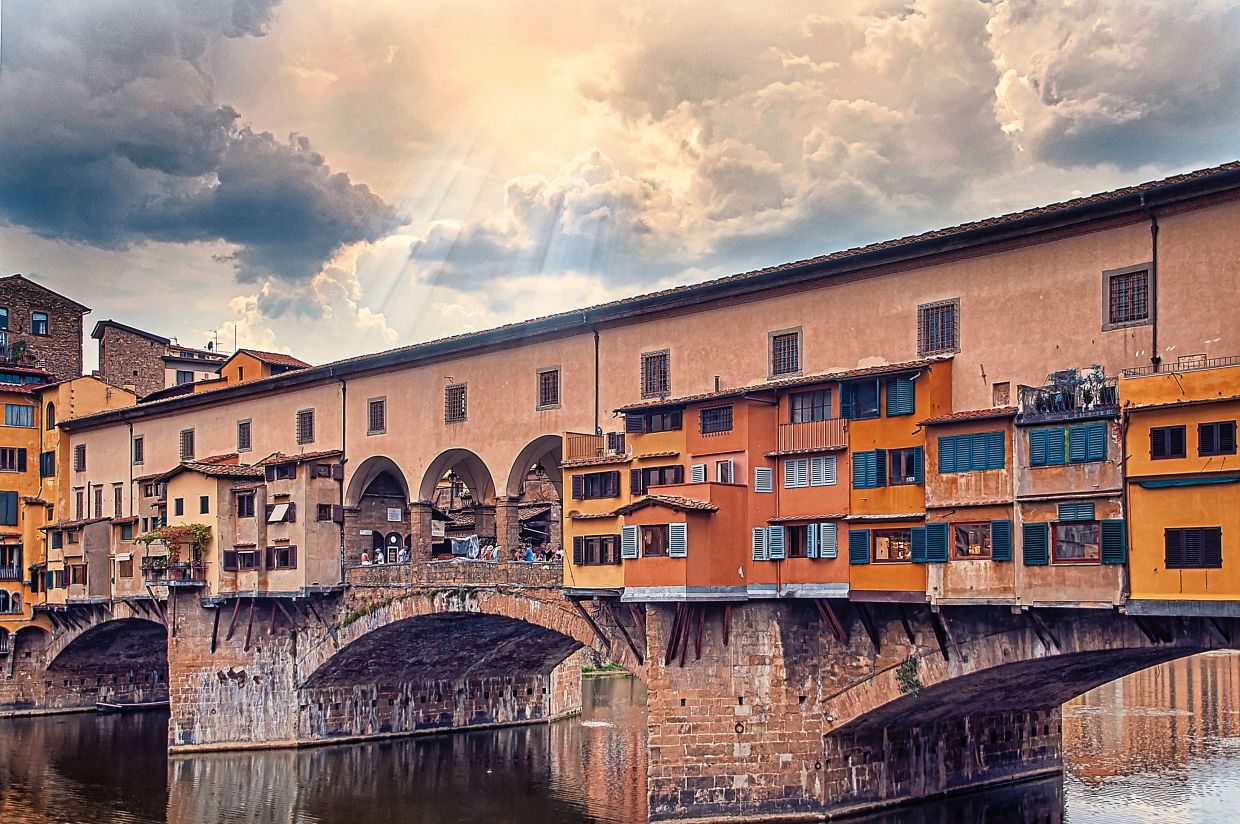 The Ponte Vecchio has definitely stood the test of time. — Pixabay

The surrounding shops are also considered ancient as they have been around since the 13th century. Many of them are occupied by goldsmiths, lending the area an opulent vibe.

Above the shops, visitors will find a secret passageway known as Vasari’s Corridor.

Located on the eastern side of the bridge, the passageway houses various self-portraits of artists like Rembrandt, Rubens and Hogarth.

Together with the Water Tower, the Chapel Bridge forms one of the most iconic sights in the city of Lucerne. The bridge is considered to be Europe’s oldest covered bridge. The Chapel Bridge is considered to be Europe’s oldest covered bridge. — Wikimedia Commons

Built in the 14th century, the footbridge – also known as the Kapellbrücke – was part of city fortifications, securing Lucerne against attack from the lake. Today, it is one of Switzerland’s main tourist attractions.

Inside the bridge, visitors will find pictorial panels and paintings that contain scenes of Swiss history as well as the city’s history. There are also biographies St Leodegar and St Maurice, the city’s patron saints. Unfortunately, many of the paintings were destroyed in a 1993 fire.

Connecting Hong Kong to Lantau Island, the Tsing Ma Bridge is the longest suspension bridge in the world for car and rail traffic. It is also known for being one of the most technically complex bridges in the world. The Tsing Ma Bridge is known for being one of the most technically complex bridges in the world. — Wikimedia Commons

The bridge was subjected to intense wind tunnel testing to withstand the powerful typhoons that sometimes hit Hong Kong. Since it opened in 1997, Tsing Ma Bridge has been favourite sightseeing spot for locals and tourists alike.

There are two tourist spots in Tsing Ma Bridge – The Lantau Link Viewing Platform and Visitors Centre. Located to the northwest of Tsing Yi Island, these place offer amazing views of Hong Kong.

You can also catch a glimpse of the bridge from the Airport Core Programme Exhibition Centre.