Volcanoes to beaches: How to spend a month in Indonesia

The sunrise at the temple complex of Borobudur is a splendour not to be missed in Java. — Photos: PHILIPP LAAGE/dpa

A month in Indonesia – that sounds like a lot of time to see the country’s paradise-like coastline, spectacular volcanoes and ancient temples. Or is it?

The South-East Asian country has more than 17,500 islands. Four weeks is not enough to see everything, so you’ll have to limit yourself to a few regions. For newbies, the classic tour from Jakarta via Java to Bali, and from there to Lombok, is recommended – or to Komodo National Park instead.

The train journey is still the most beautiful way to discover Java, as most Indonesia travel pros will tell you. Over several days it makes its way from west to east across Indonesia’s most densely populated island.

Most travellers will quickly leave the bustling capital Jakarta behind. (Tip: book a hotel for the first night near a long-distance train station, for example Gambir, buy the train ticket online and print it out at the station.)

Your first destination on the journey east is Yogyakarta. The city is Java’s cultural centre and offers several historical sites, including the Sultan’s Palace. Those looking for souvenirs will be happy in the antique shops around Prawirotaman Street.

It’s worth getting up early the next day. Outside Yogyakarta is Borobudur temple, the largest Buddhist building in the world. Tours can be booked in almost every hostel. The journey begins at night, ensuring you arrive at the temple complex before other tour groups. 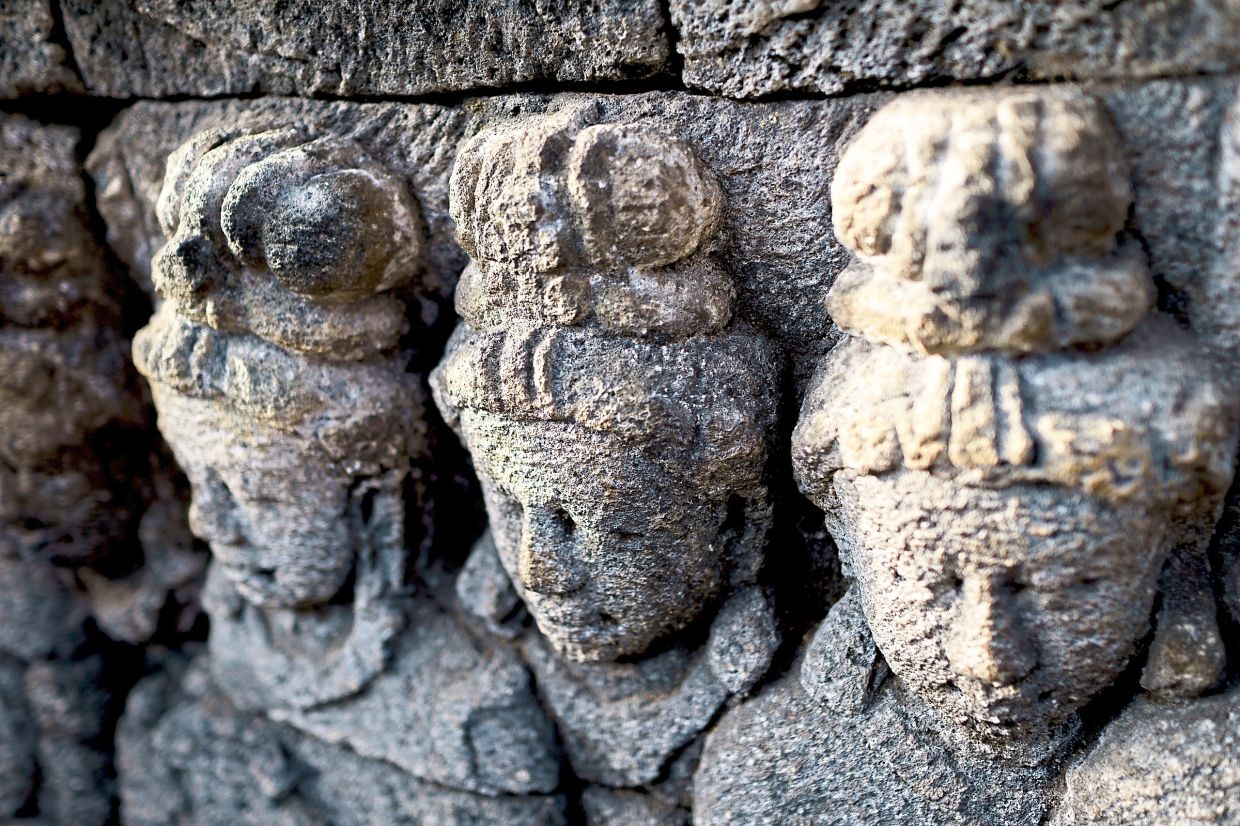 These stone carvings mark Borobudur temple, the largest Buddhist building in the world.

Then there’s the volcanoes. These both fascinate and instil fear, drawing tourists from all over the world. The Bromo Tengger Semeru National Park with its huge volcanic basin and several craters is a must. To get there, take the train from Yogyakarta to Probolingoo.

The tours start the night before, picking up tourists at their hotels and dropping them off at the park. From there, it’s a cautious walk under a starry sky to King Kong Hill, probably the best viewpoint.

The view of Gunung Bromo and Semeru at sunrise is stunning. The excursion to the Ijen volcano in eastern Java is even more spectacular. At the bottom of the crater, sulphur gases shoot out of the volcanic rock in sometimes metre-high blue flames. Tourists wear protective masks, while locals work hard to get the sulphur lumps from the mountain – without masks.

The train journey ends in the coastal town of Banyuwangi. After the exertions of the journey so far, Bali now awaits, where you can take it easy for a few days. As the ferry departs you leave Java behind. Impressive play of colours: The crater lake of Ijen at dawn.

You could easily spend a whole month in Bali. The friendliness of the people, the playful charm, which is evident in the ornate Hindu house temples, and the excellent infrastructure make it easy to stay here longer than planned.

While the popular beaches in Kuta in the south are great for surfing, backpackers like to stay in Ubud, a small town in the hinterland where hipsters, hippies, hedonists and culture-conscious day trippers all come together.

Those who want to explore the island’s sights can rent a scooter or use an e-hailing app. And if you’ve been on a tight budget up until now, you could treat yourself to higher quality accommodation, for example with a private pool. 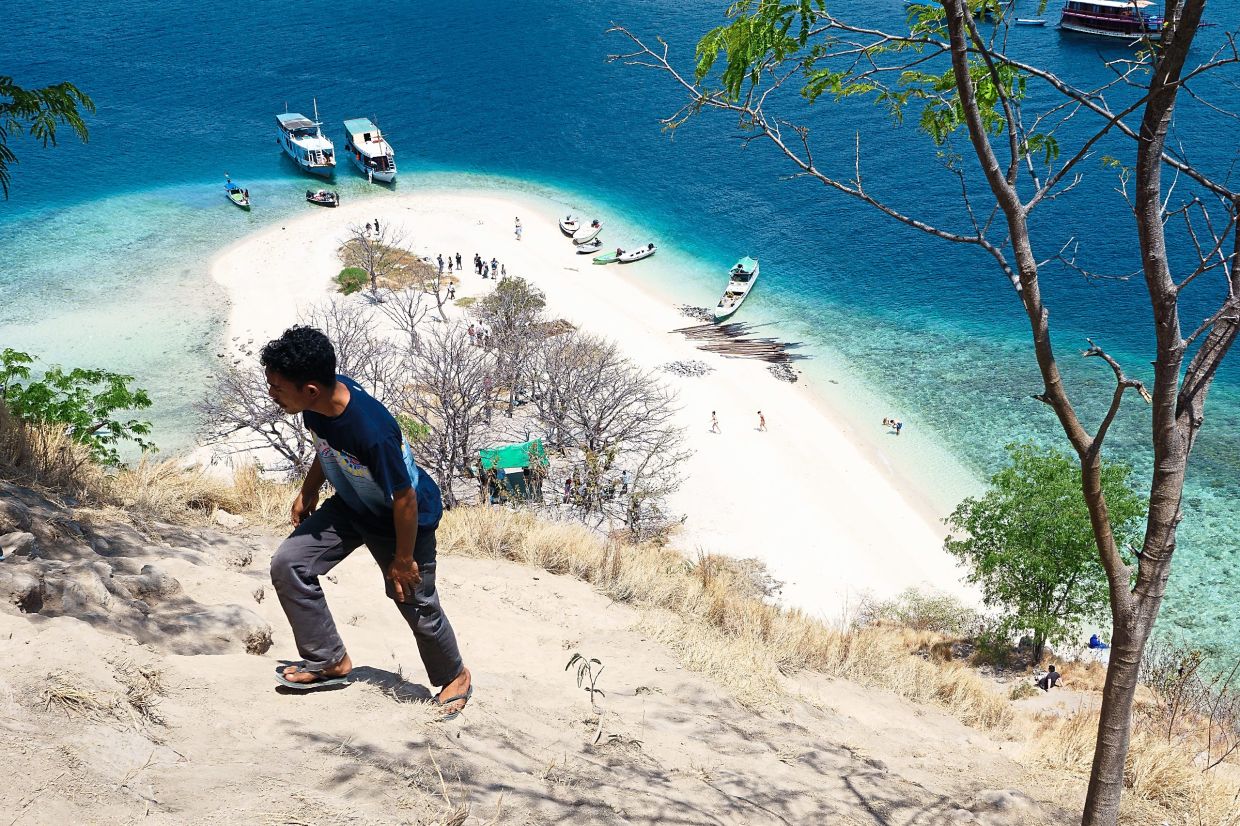 The wonderful colours of the island of Kanawa, a common stop on a boat tour through Komodo National Park.

Popular attractions in Bali include the Gunung Kawi and Pura Tirta Empul temples, the mountain village of Munduk as a starting point for long hikes, the rice terraces of Jatiluwih and the Sangbeh monkey forest. In Ubud, the Balinese dance performances are breathtaking, while divers can find beautiful spots in the north of the island.

After Java and Bali, travellers have the choice: On to the neighbouring island of Lombok, with the imposing Rinjani volcano? To the Gili Islands, where backpackers spend their days on the beach and nothing much happens? Or take a flight from Denpasar to Kalimantan (Borneo) to see the orang utans?

Another option is to take a boat trip from the island of Flores, to the Komodo National Park and its famous, rather terrifying Komodo dragons. Local tour operators offer tours to the national park to see the giant lizards, which can be booked on WhatsApp and include pick-up directly from the hotel.

After a month of island hopping, it’s time to head home – knowing that you’ve experienced so much, but still haven’t seen everything. It might to be a good idea to start planning a second trip. – dpa

*These trips were made before the Covid-19 pandemic, so some regulations may have changed in Indonesia. While we can’t travel now, we can always plan for future holidays.