Sabah Tourism, Culture and Environment Minister Datuk Jafry Ariffin said the system would enable hikers to make a direct booking and payment without having to go through agents as practised previously.

“I hope the system can make bookings easier for hikers and will provide fair opportunities for more extreme sports enthusiasts to climb Malaysia’s highest mountain, ” he said at an event in Kota Kinabalu recently. Only a certain number of permits are given out to climbers daily.

Jafry said the booking system was developed by a local company entrusted by TTS, in an effort to improve its services to attract domestic visitors and international tourists.

In addition, he said other online booking facilities under TTS would also be developed in the near future.

Meanwhile, Jafry said that currently, only two tourism companies in the state have received approval to conduct tourism activities under the travel bubble initiative, subject to the standard operating procedures set by the authorities.

He said the Putrajaya Corporation (PPj) was open to any development ideas from private companies but they must ensure that the environmental value in a tourist spot is well protected.

For example, applications are now open to improve the Wetlands Park so that it can be managed commercially to attract more visitors and not turning it into a commercial area, he said.

He added that the PPj has received proposals from several local companies to develop glamping products at the Wetlands Park and the selected company was expected to begin construction works at the end of the year.

He said that there were also proposals to develop a Safari Park on a 64.7ha land in Precinct 19 with an estimated cost of RM500mil.

“We would like to see creativity. We will be very open and transparent, we want to give chance to anybody who wants to come and help bring Putrajaya to the next level in line with our policy of making Putrajaya a major recreational city, ” Annuar said.

In another development, Annuar said the Kuala Lumpur City Hall has been instructed to submit a proposal to ensure the survival of traders in Kuala Lumpur after the “Wilayah Bebas Berniaga” programme came to an end.

“A certain number of traders would like to remain and do their current business, and we have to look for locations where we can construct proper stalls for them to continue doing their business, ” he said.

The Wilayah Bebas Berniaga programme, an initiative that allows the people in Kuala Lumpur, Putrajaya and Labuan to do business, is implemented for six months starting Nov 15 last year, and will end on April 15.

The KL Hop-On Hop-Off (HOHO) bus service is a popular and convenient way to explore famous landmarks in the city and avoid traffic congestion. However, the movement control order, implemented twice since Covid-19 hit the country early last year, has vastly affected the tourism industry as well as the services of the HOHO buses, which are operated by Elang `Wah Sdn Bhd.

Its managing director Syed Azhar Syed Nadzir said the bus operations were halted due to the implementation of the MCO but resumed on March 1. The company is currently focusing on the domestic market, as international borders are still closed.

“This time around we are focusing on night tours because the atmosphere is more comfortable and the scenery is more attractive with (the city’s) bright lights at night.

Syed Azhar said this was the best time for local tourists to enjoy the free and easy bus ride as previously the buses were always fully booked with foreign tourists.

In line with the standard operating procedures to curb the spread of Covid-19, he said the company was enforcing strict guidelines, including making it compulsory for passengers to wear a face mask at all times, taking passengers’ body temperature and carrying out a thorough disinfection process in KL HOHO buses.

KL HOHO buses operate daily with a ticket price of RM25 for adults and RM15 for children for day time travel, and RM30 (adult) and RM15 (children) for night tours. – Bernama 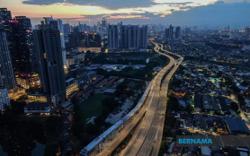