How Bali is diversifying its tourism amid Covid-19

I Kadek Didi Suprapta is a law graduate from Bali, Indonesia who normally works as a travel agent. But after business dried up due to the worldwide pandemic, he headed back to the village he comes from and decided to turn his attention to vegetables.

Back at his village, Songan, he and his family tend a small farm on the banks of Lake Batur. A digital marketing expert, he developed an app called Lapak Sayur to create a marketplace for the local produce.

“I want to connect farmers with a wider consumer base, ” he says.

Once a haven for yoga practitioners, masseurs and holidaymakers, Bali is now in the midst of a transformation. In the sudden absence of tourists, the island is now embracing other forms of business.

In June 2019, Bali saw 600,000 foreign guests; a year later, that number was just 32. Most people in Bali work directly or indirectly in the travel sector, and in 2019, some six million people travelled to Indonesia. from abroad, according to the local statistics office.

But in March 2020, tourism ground to a halt, as international flights were suspended and popular destinations shut their doors.

Crises are nothing new for Bali. Terrorist attacks killed hundreds of tourists in 2002 and 2005. There was bird flu in 2007, just as tourism was recovering. Then came warnings of a major eruption of the Gunung Agung in 2017, leading many to cancel their flights.

But the pandemic is leading to larger changes. 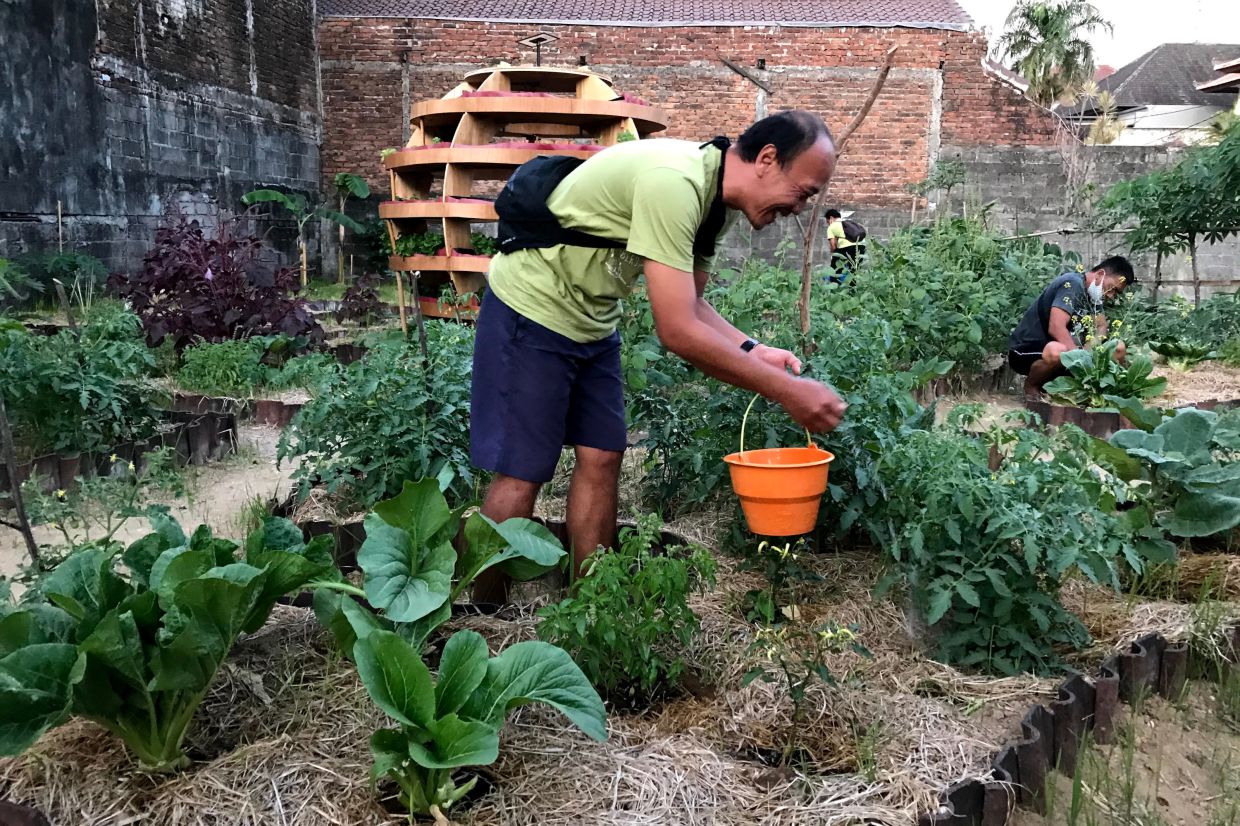 Locals are growing their own vegetables to help counter the loss of tourist income due to the pandemic. — ANTON MUJAHIR/dpa

Now, calls are growing for Bali to embrace new business – especially given the downside of mass tourism, from large amounts of trash to binge-drinking and other social ills.

The provincial government is now seeking to boost farming and creative industries to reduce Bali’s dependence on tourism.

For now, some are struggling. “The Balinese tend not to show their emotions. Their expression says they are happy, but they are only hiding the sadness, ” says Wayan Partawan, a yoga teacher in Ubud.

Others call the change a blessing.

“It is so calm and quiet. It’s a very special time to be on the island. There is no traffic, you can freely drive everywhere without the usual traffic jams. That’s very special, ” says Alejandro Fernandez-Cruz, a Spaniard based in Ubud with his family.

It is sad so many places are closed, he says. But “the people are helping each other, it is the way the Balinese live.”

That can be seen in the communal farms that are now blossoming.

Residents of Tegeh Sari, in Denpasar, transformed a landfill site into an organic farm that’s sprouting tomatoes, peppers, aubergine and other vegetables.

In Indonesia, if land is unattended for two years, a community can manage the plot, with the owner’s permission.

The villagers built a roof for

their vegetables and fertilized them with compost, and now are busy harvesting tomatoes and red spinach.

“At least we don’t have to buy vegetables for our daily cooking, ” Putu Gede Himawan Saputra says.

Saputra, an accountant at a state-owned business, is now working half-days. He has more time, as do his fellow community members, who work as either drivers and camera rental businessmen, or are in marketing.

“We had stressed-out, unemployed villagers and land that was unattended, so why not do something useful?” he says.

“We still buy the rice, but at least we can boost our immunity by eating vegetables, ” Saputra says.

Farming could prove lasting if it can generate enough money, says Made Antara, an agriculture professor at Udayana University’s Agricultural School. But growing produce is harder than selling it, requiring physical strength and knowledge, he says.

He doubts farming can generate enough income to make up for the shortfall.

“Bali’s economy relies heavily on tourism. It’s mainly the tourist industry that takes up Bali’s agricultural products, ” he says. The government supports jobs in urban areas but does too little for farming, he adds.

Koster too wants to see Bali rely more on agriculture, manufacturing, creative industries and innovation. But that will require infrastructure and integrated air, sea and land networks, he says.

For now, another popular local passion has sprung to life. Many locals are now flying kites, which are seen as tokens of luck by Hindu Balinese. Perhaps it’s no wonder the sky is so full of them. – dpa

MCO: What are the easiest new languages Malaysians can learn at home?
5 popular restaurants Malaysian foodies can visit in the future
Over-the-top gardens are the new vacation spots
MCO 2.0: Hotels in Malaysia feel neglected, being 'left to collapse'
MCO 2.0: Tourist guides need more than RM500 assistance to sustain livelihood
MCO: Malaysians feel the travel ban blues, but happy to avoid nosy relatives
Let’s get beefed up for wagyu, the meat that melts in your mouth
Are travellers ready to brave 19 hours (and more) in a plane?
KL to be transformed into street art capital
Gordon Ramsay to open restaurant in Malaysia, netizens want the 'Idiot Sandwich'