The writer and her husband took a day excursion and explored Koh Samui. ­— CHIANG CHER TING

Last year, my husband and I joined the Genting Dream Cruise from Singapore with stops at Koh Samui, Thailand and Redang Island in Terengganu.

Our first stop was at Koh Samui; we had to take a small boat from where our ship docked to the island jetty. A female tour guide then took us around the island for a short excursion.

We checked out a Buddhist temple which housed a large Golden Buddha statue, and a floating temple. We managed to shop for some souvenirs at some stalls, as well as a supermarket, before settling down at a restaurant for lunch.

Our guide also took us to the famous tourist attraction, the Grandfather & Grandmother Rocks, and a waterfall.

In the evening we sailed for Redang, and reached the island the next morning. We went ashore at noon to explore a lovely resort and just chill. The beach was clean but crowded. There were hundreds of local and foreign tourists who basked in the blazing heat and sunshine.

We decided to walk around and look for souvenirs; we headed back to the ship at 4pm, just an hour before it sailed again.

There were many activities on the ship itself so we were happily entertained during the whole time we were at sea. There was a futsal field and basketball courts, a rock climbing facility, four swimming pools and a gymnasium.

The ship’s three restaurants served Chinese, Indian, Malay and Western cuisines, and there were many options for vegetarians too.

On our final night, the crew put on a special fireworks display for the passengers, as well as a fun concert by the pool.

It may have been a short holiday, but it was a fun and memorable one for my husband and I. 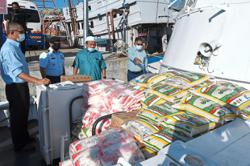