A Chinese ‘bride’ throwing wheat as part of the traditional Serbian wedding show for tourists in Gostoljublje, a village near the Serbian town of Kosjeric. — Photos: OLIVER BUNIC/AFP

A “bride” in a pretty white dress and trainers runs through a field, her long white veil fluttering behind and her “groom” in hot pursuit.

It’s not a scene from the Hollywood hit Runaway Bride but a traditional Serbian wedding ceremony – only with most of the roles played by Chinese tourists.

Enticed by visa-free travel and low costs compared to Western Europe, the Chinese have been coming to Serbia in droves.

The landlocked Balkan state is now one of the fastest-growing destinations in Europe for Chinese travellers, topping the charts last year, and has been rolling out the red carpet.

From Chinese restaurants, to street signs in Mandarin, infrastructure has quickly sprung up.

Chinese police were even dispatched to the streets of Belgrade in the summer to help communicate with their compatriots, a programme also piloted in other European cities.

And in rural western Serbia, locals in the small, picturesque holiday village of Gostoljublje have also found a way to claim a slice of the pie.

Zeljko Sredic, who owns the resort of wooden holiday homes, lays on a full Serbian wedding experience, without actually getting hitched.

“We chose to do weddings because they include all the customs: the culture of cuisine, song, dance, costumes and so on, ” he said.

Against rolling hills and farmland, the wedding extravaganza has been wooing the Chinese in particular since it began two years ago.

On a recent weekend, two busloads of tourists mostly from Shanghai were welcomed with folk music and drawn into a traditional circular “kolo” dance by their Serbian hosts.

“They always want something unusual, something different and this is definitely something you cannot find in agencies that have typical tours to offer, ” Katarina Jovancic, the group’s Serbian guide, said on the sidelines of the dancing.

Next, the women were given traditional white aprons, while men donned boat-shaped peasant caps and were cast in their “wedding” roles.

Peals of laughter erupted as they were led through a series of rural traditions, including shooting an apple, riding up a hillside in a horse-drawn carriage and “bargaining” a price for the bride.

To everyone’s surprise, the Chinese bride put her own stamp on the ceremony by heading for the hills before she was “caught” by the groom, played by a local Serb.

The celebration wrapped up with food and drink, though some of Serbia’s dairy-heavy dishes, such as the creamy cheese known as kajmak, were dropped to accommodate Chinese tastes.

“We wanted to offer authentic Serbian cuisine, but it turned out that it was not realistic, ” Sredic said.

Of the 1.2 million people who visited Serbia in the first eight months of this year, the Chinese dominated with 92,000 arrivals, or more than five times the number for all of 2016.

The surge started in 2017, when Serbia became the first country in Europe to scrap visas for its far eastern ally, a sign of the two nations’ flourishing political ties.

China has “no partner that is more reliable than Serbia, nor a friend that is more sincere, ” Serbian President Aleksandar Vucic proudly proclaimed in September.

Belgrade and Beijing have been especially close allies since the 1990s, with economic links growing in recent years.

For China, Serbia is a key foothold on the European continent for its global infrastructure ambitions to funnel goods to Western markets.

Belgrade, for its part, welcomes the investment, with Chinese firms building bridges and highways through the country, plus scooping up a collection of debt-hit mines and industrial plants.

Chinese tourists also see Serbia as a gateway to the rest of the region, said Flora Xu, a guide from the Chinese travel agency 54 Traveler.

Neighbouring Bosnia recently followed suit by dropping visa requirements, while Albania lifted them for the tourist season and Montenegro has made it easier for large groups to enter.

“Because the other neighbours have also opened their gates to the Chinese” by relaxing visa regimes, “people became interested in this part of the world they previously heard nothing about”, the guide said.

For younger travellers like Xin Li, a 37-year-old electrical engineer who played the “father of the groom” in the mock wedding, the Balkans offer a cheaper European experience than pricier capitals in the West.

“It is the first time for us to go to Europe, ” he said, saying he and his wife were excited to “see something different”.

Their tour started in Belgrade and was set to weave through western Serbia, stop off in mountainous and coastal towns in Montenegro, and wrap up in Mostar and Sarajevo in Bosnia.

And some tours even make a stop at the site of the former Chinese embassy bombed by NATO in 1999.

The country has invested millions of euros in its tourism sector in recent years, with the influx of travellers providing a welcome source of cash.

Last year, tourism to Serbia brought in €1.5bil (RM6.9bil), contributing more than 3% of the GDP.

In Gostoljublje, the weddings have another benefit too.

“This is very important, to keep alive the story of how weddings looked in the past, ” said Milija Lazovic, the leader of a quartet of folk singers, who helped guide the experience with around a dozen other locals.

“Everybody is involved, if needed, so everyone can earn something, ” he added. — AFP Relaxnews 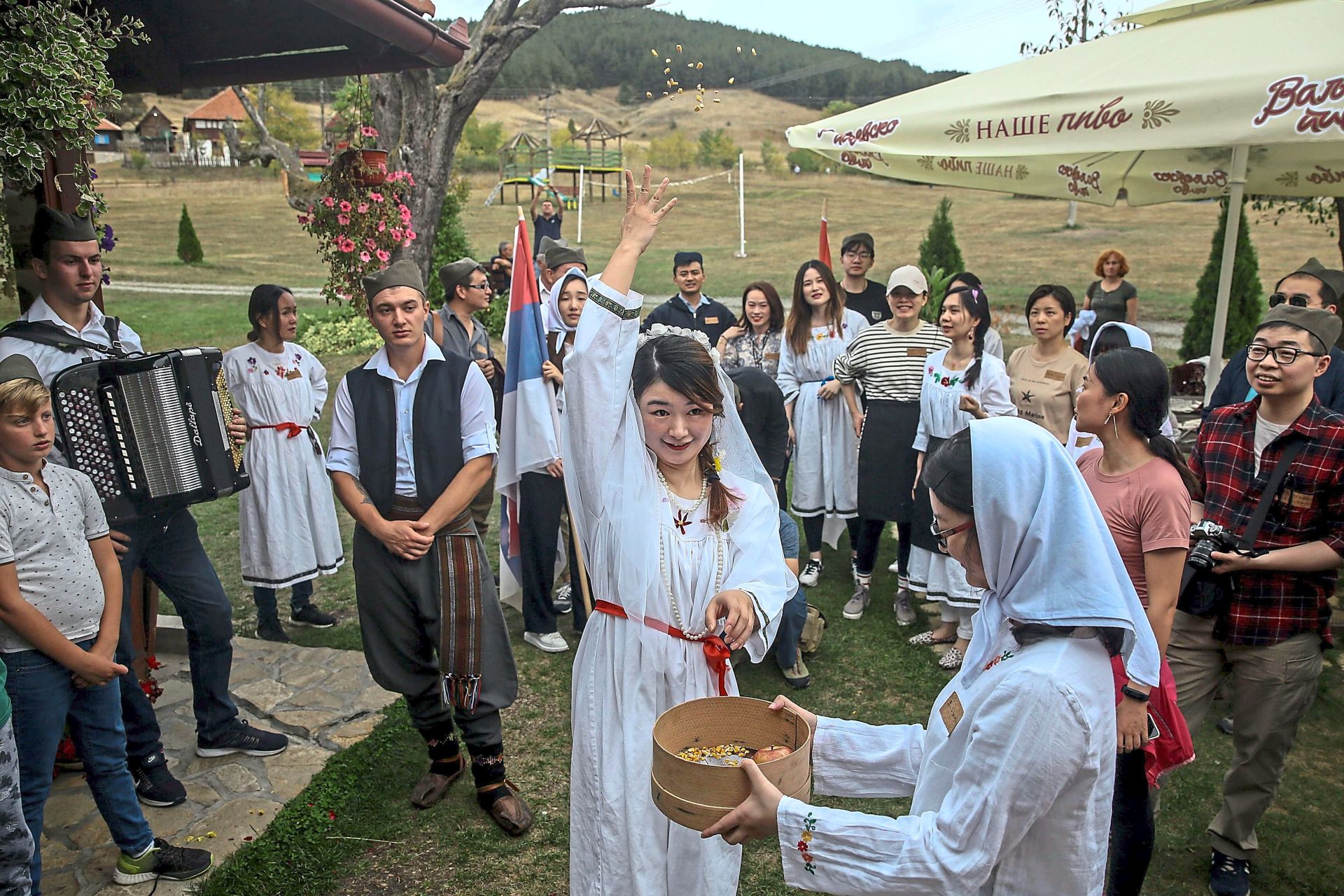 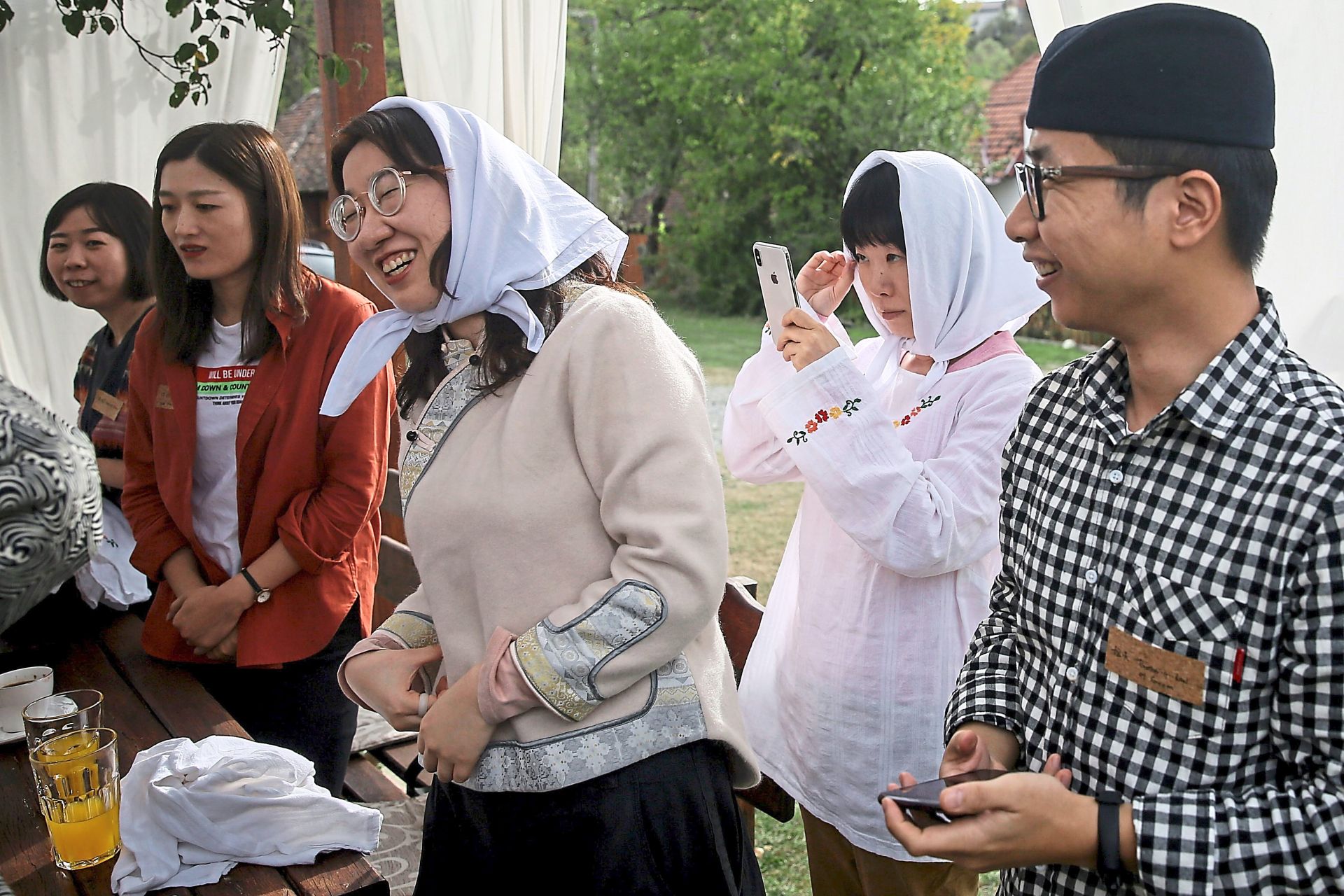 A Chinese ‘bride’ throwing wheat as part of the traditional Serbian wedding show for tourists in Gostoljublje, a village near the Serbian town of Kosjeric. — Photos: OLIVER BUNIC/AFP

Every tourist has a part to play in this mock Serbian wedding.