Zombies on the loose!

Shrill screams and piercing cries filled a busy train station in the city centre. A panic-stricken crowd was seen running helter-skelter to get away from things which looked like decaying walking corpses with bloodthirsty lust for human flesh.

The situation was just like a scene extracted from one of the ‘flesh-eating zombies taking over’ movies, but this time, it is happening right here in Kuala Lumpur! Zombies were reportedly spotted roaming the streets of Masjid Jamek, Pasar Seni, KL Sentral, Maluri and Ampang Park, scaring and lunging at passersby.

At the same time, zombies were found missing from the 'Train To Busan Horror House' experience at Resorts World Genting.

Well, it turned out that the zombie invasion in the heart of the city was a publicity gimmick for the highly anticipated horror house experience, courtesy of Resorts World Genting. So, the city is still safe from the undead, for now. Based on the blockbuster 2016 South Korean zombie apocalypse movie Train To Busan, Resorts World Genting unleashed a railway line of horror that offers a unique blend of horrific thrills and scary fun to fans of the movie and fans of horror in general.

With a global box-office gross exceeding US$93mil, Train To Busan is one of the highest-grossing Korean films ever. In Malaysia, it grossed over RM21mil and still ranks as the top Korean film of all time in the market.

Those who have watched the movie will be familiar with the story of a father and daughter attempting to survive among a zombie outbreak, which has been described as “a thrillingly unique and pure entertaining take on the zombie genre” with “plenty of social commentary and skilfully staged action.

Developed collaboratively between Resorts World Genting and virtual reality specialists Vividthree, the Horror House experience consists of several areas, each with its own set of interactive activities.

Following the plot of the movie, where the father and daughter meet in Seoul for a trip to Busan, the first part of the Horror House is themed around Seoul Station. 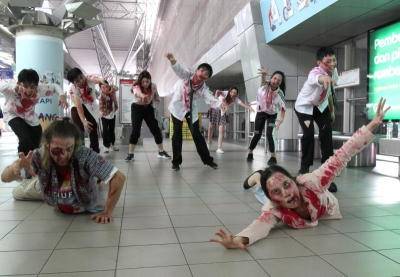 Zombies lurking around at a train station.

Guests will find themselves trapped in an apocalyptic version of the gigantic train station, fending off zombies and traps as they battle through environments such as the Long Corridor, the Toilet, the Supermarket, the Café and the Mirror Maze to reach their goal: the train that will take them away from this hellish nightmare.

But the train is infected too. The second part of the Horror House takes place on the actual Train To Busan.

Just as the movie’s characters had to battle their way to the front car of train in hopes of surviving the journey to Busan (where a quarantine zone has been established), the Horror House tasks guests with a challenge: to make it from Train Platform and Passenger Train Carriage, through the Chemical Cargo Train and CDC Lab, to safety.

The alternative will be falling as one of the infected, and returning to haunt those brave enough to continue their adventure. Get to sanctuary, or fall trying.

Two additional experiences flesh out the world and mythos of Train To Busan. At the two Base Camps, guests who have survived the ordeal of the train can take up arms against the horde of zombies in various Virtual Reality and other interactive activities.

These include strapping on body armour and wielding guns to defend the quarantine areas from invading zombies – just like the finale of the movie – or fighting against time to develop a cure from the ravaging virus. 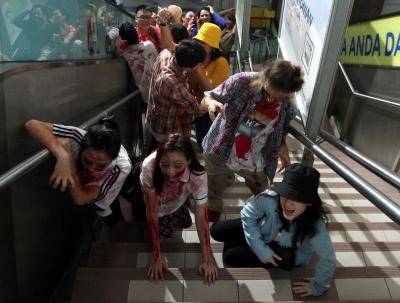 Zombie invasion in the city centre.

If all this adrenaline-packed action sounds tiring and sapping, then there is a payoff for everyone: a Seoul Retail Street that brings the best of Korean cuisine and K-pop culture as a reward for all those that have survived the horror of the Train To Busan.

“I hope that everyone will have a very good time. We have spared no expense in recreating and replicating the world of the blockbuster film Train To Busan. It is a truly unique way here at Resorts World Genting, and we hope our guests will love the experience, ” said Resorts World Genting assistant VP of Entertainment and Events Roger Ong.

The Train To Busan Horror House experience departs for adventure at the Skytropolis Indoor Theme Park. The Horror House will be open from Friday to Sunday from now until Dec 1,2019, and daily from Dec 2,2019 to Jan 1,2020. Tickets are priced at RM90 for regular admission (RM80 for Genting Rewards members).

A Train To Busan Horror House single admission plus Skytropolis Preview Pass combo package is available at RM128, and guests looking at skipping the queue can opt for an additional Express Pass at RM30. Why are some places worth a sightseeing trip and others aren’t?
Travel companies vow to hire more women in 'male-dominated industry'
Where are the Instagram-worthy waterfalls in Malaysia?
5 special airports to discover around the world
Malaysian travellers share the joy of discovering airports Premium
Can low-cost Malaysian airlines help post-pandemic tourism recovery?
Tourists flock to the coolest igloo in Kashmir amid Covid-19
Famous ‘kawaii’ cafe in Tokyo closes down due to the pandemic
South Korea to spread hallyu love to travellers and K-pop fans
Into the green we go in Taman Negara