Peaceful and satisfying pilgrimage in India

The 112-foot Adiyogi statue, dedicated to Lord Shiva, at the Isha Yoga Center in Coimbatore, India.

Why India, you may ask. I have always believed, and still do, that God is everywhere. But there is something powerful and mystical about centuries-old Hindu temples where thousands have gone to pray that draws you – and, this, you can find only in India.

Why this title? Let me explain ...

As many will attest, there is only one downside when going to India to pray. It is the hordes of touts who descend upon you, offering their services as guides and unscrupulous priests, who advise all kinds of ceremonies purportedly for your well-being.

These people can spot a foreigner from a mile away and fleece the gullible (you never face this in Hindu temples in Malaysia). It causes you to lose your religious focus and, in my case, induces intense anger – an emotion you do not want when you pray.

It’s all about money – something you think would not be an important commodity within God’s house! When I went to India three years ago, I was advised by the organisers that we would be blessed if we fed several priests to the tune of 110 rupees (RM6) each. With millions starving in India, I was against feeding another overweight priest.

The driver of our hired car suggested that we provide lunch to the residents of two old folks’ homes and an orphanage. My sister was filled with much love when the girls in the orphanage surrounded and hugged her.

One of them requested that we include a laddu (traditional Indian sweet) as she had not savoured this for a year – the cost: 40 rupees per person (RM2.40) + 10 rupees (60 sen) for the laddu – such a small amount, to witness the priceless look of joy on an innocent child’s face. I was very happy.

A glorious sunrise and the start of a peaceful pilgrimage in India, for the writer.

In another temple, two guides demanded for more than the agreed upon money for their services at the end of the ceremonies. When I refused, they vanished and threw away our slippers so that my sister and I had to walk barefoot on the hot road to reach our car.

So, this time, I was prepared. I did my homework and looked up the layout of all the temples we planned to visit. I told my wife we will appear confident like the locals, prepare our tray of offerings to the deity (coconuts, fruits, flowers and incense sticks), walk into the temple, buy the official entrance tickets – and refuse any offer of help.

A glorious sunrise viewed from our hotel room on Pasumalai hills in Madurai heralded the day with the promise of a successful pilgrimage. This was my fourth visit to the 6th century Meenakshi Amman temple in Madurai.

The temple complex is vast. Our driver dropped us off at the southern entrance.

Flowers are no longer sold within the temple, and the best garlands are to be found in the shops about half a kilometre away.

Security was tight at the temple entrance. We were not allowed to bring in backpacks, cameras and handphones. A 100 rupee (RM6) ticket will ensure that you get to stand a little closer and longer and the chance to pray to the main deities: Meenakshi Amman and her consort Lord Sundareswarar.

The moment we entered the temple complex, self-appointed guides approached us to offer their help. I politely and very firmly refused. It was subsequently easier.

From the entrance, Meenakshi Amman’s shrine was along a short corridor on the left, opposite the large temple pond. After praying to her, we backtracked and saw a large statue of Lord Ganesha.

After paying our homage to the Lord who would remove obstacles, we turned left to Lord Sundareswarar’s shrine.

A priest appeared and offered to conduct special poojas for a hefty donation.

Again, I politely and firmly declined and he appeared happy with the 200 rupees (RM12) I gave him for his services. He took our offerings into the shrine and returned with blessings for us to take home. We then sat down in a corner and recited our mantras without disturbance. I felt very satisfied with this temple visit.

Two days later, we drove to Palani city to Lord Murugan’s temple on the hill. We stayed at the Ganpat Grand Hotel just opposite the temple.

The night of our arrival, we walked over to the Thiru Avinankudi Temple near the foot of Palani Hill. This ancient temple is said to be older than the hilltop temple and one of the abodes of Lord Muruga.

It was not crowded. And it was refreshing not to be hounded by touts. We prayed in peace.

A section of the 1,000 steps at the Palani Hill Murugan Temple in India.

Early the next morning, before it got too hot, we set out to the hilltop temple. Devotees have a choice of either taking cable cars up the hill or climbing 1,000 steps (Batu Caves has 272 steps).

I felt very strongly that a pilgrimage requires some sacrifice, so we chose to walk up the hill, carrying our offerings of flowers, fruits and a large pot of milk. The alternative was a longer but more gently sloping path used by temple elephants; we chose this. Our hiking poles helped us greatly.

We were again approached by guides, whom I politely refused.

The path was clean and well shaded from the sun. After about 40 minutes of climbing, with a few stops, we reached the temple. Strangely, we did not feel tired.

Along the way, we had stunning panoramic views of Palani city below and the surrounding countryside. For a ticket costing 150 rupees (RM8.90), one gets to view, sit and pray near the sanctum sanctorum.

It is important that one guards one’s position as the doors open, because there will be a mad dash and people who have arrived well after you will jostle for better seating positions to view the Murthi (image, statue or idol).

I have not experienced the vibrations some claim to feel in special places of worship but I felt energised after praying at Palani Murugan and did not feel tired the whole day even though a lot of physical exertion was required.

That evening, I did the 2.6km circumambulation of the temple hill and was amazed by the cleanliness of the road; a group of sweepers were constantly at work to achieve this. This was a spiritually uplifting visit.

The following day, we drove to pray at the 12th century Marudhamalai Murugan temple, another beautiful ancient hilltop temple devoted to Lord Murugan. Again, a lot of peace – and no touts or cheating priests. We finally reached Coimbatore to spend two days at the Isha Yoga Center.

Located at the foot of the Velliangiri Hills, this beautiful retreat is close to nature, with rainbows, trees, birds, lotus ponds, shrines to meditate and pray, halls where you are guided in yoga practice, and energy pools to melt away karmic blocks.

This is also home to the majestic 112-foot Adiyogi statue, dedicated to Lord Shiva, the first yoga teacher.

The security into the centre is tight. No one approaches you for donations; you are left completely alone and at peace. And for the hungry traveller, the best place to eat here is the Moondraam Pirai restaurant, located just outside the centre. It serves superb vegetarian dishes.

This was a memorable and spiritually satisfying pilgrimage. I give thanks to the Divine, that for the most part I was left alone to bond with my God in peace.

The writer is a medical doctor who enjoys travelling and birding. The views expressed are entirely his own. If you have any feedback, leave your comments below.

Peaceful and satisfying pilgrimage in India 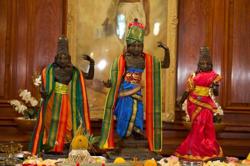 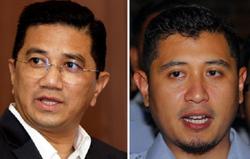 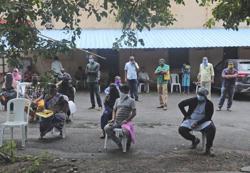