Have you ever wanted to try caving? Some wading through an underground stream is required. Filepic

A few years ago, I embarked on my first caving or spelunking adventure. A friend had invited me on a trip to explore two caves in Perak – Gua Kandu and Gua Tempurung.

Hesitantly, I hemmed and hawed as she waited for me to confirm whether I would be joining her group. “Err ... I’m rather claustrophobic and have a fear of heights,” I replied, trying to escape.

But a week later, my adventurous side got the better of me, and I found myself sitting in a van with friends, heading towards Gopeng. The two caves are located near this quaint town in Perak.

You could say I got the best of both worlds during this first caving experience because one is a dry cave while the other is a wet cave.

We started off with Gua Kandu, a dry cave. Two hours to midnight, we set off on our expedition, armed with shatter-cum-shockproof torches and headlamps. The cave was pitch black.

I grasped the thick rope tightly with my gloved hands and placed one foot on the cave wall. It was a 7m climb up a dusty rock to the next chamber. The brown earth left imprints on my thick stonewashed jeans and shirt. I was thankful that my hiking shoes had good traction because it was a 90 degree climb. When I hesitated, I could hear my friend yelling in the distance, “Don’t look down, just keep going. You can do it!”

That was my first taste of the sport of spelunking.

Gua Kandu is known for its myriad chambers interconnected at many different levels. There were limestone formations in unusual shapes and sizes, known as “staghorns, corals, straws, and curtains”, according to our orang asli guide.

Gua Kandu is extremely dusty because it is a dry cave. Filepic

He then motioned us to turn off our lights. We stood still in the darkness, listening to the only audible sound – our heartbeats. I held my hands out in front of me to find it “swallowed” by the darkness around me.

“Put on your masks,” he said as we approached the next chamber.

The inside of the cave was extremely dusty due to the lack of moisture. To prevent from choking on the dust stirred up by our movement, we slipped on the masks we had brought with us.

We were startled by an eerie, mournful wail. Our guide laughed, and revealed that it wasn’t some mysterious monster or ghoul hiding in the belly of the Earth, but just the midnight breeze flowing through gaps in the cave wall, causing a low, howling sound.

Deep in Gua Kandu, shiny particles glistened when the light of our torches and headlamps fell on them. The diamond-like crystal formations embedded in the rock is how it came to be known as the Diamond Cavern.

Finally, we arrived at the other end of the limestone hill where the cavern opened up into dense jungle. Light from the full moon and stars shone through tree branches as we sat down on the mossy slope to rest. We had spent four hours in the cavern and it was nearly 2am.

We then trekked back to the entrance of the cave where we had started our journey. Our hardy beds for the night were groundsheets with some cardboard to cushion our backs.

Gua Tempurung is a wet cave with a clear stream running through its bowels. Photo: Wikimedia Commons/Andre Oortgus

Some wading through an underground stream is required. Filepic

There are many unique formations in Gua Tempurung. Photo: Wikimedia Commons/Andre Oortgus

The next day, we set off for Gua Tempurung, a wet cave with a clear stream running through its bowels.

We wore fast-dry clothing with swimsuits underneath as we had to wade through underground streams. At certain parts, the ceiling was so low that we had to crawl on our elbows and knees along the stream bed. Then, suddenly, the tunnel opened out into a vast cavern with a ceiling so high that we couldn’t see its extent. The going soon got tough as we had to trudge uphill along a narrow ledge above the trickling stream.

Unlike Gua Kandu, Gua Tempurung was alive with unusual insects and invertebrates I had never seen before – gigantic spiders as huge as a fist, albino millipedes, and strange crickets that scurried away into the darkness as we approached. I was thankful for my cap which protected me from the guano showered from bats resting overhead.

We oohed and aahed at the spectacular underground fairyland with its unique stalactite and stalagmite formations, all still alive and evolving with the passage of time. At the huge main chamber stood Gua Tempurung’s very own “Statue of Liberty”, a majestic limestone lady rising from the depths of the rock. Further in, there was a stone couple in loving embrace.

Drenched in perspiration and wet from the underground stream that we waded through, we trudged back to the entrance, taking nothing from the caves with us but unforgettable memories of our adventure.

Have you ever wanted to try caving? 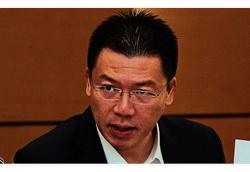