Ever wanted to explore inside the pyramids?

The Pyramids of Giza are located at the edge of the sands in Giza, the third largest city in Egypt.

Have you ever wondered what it’s like to be a tomb raider a la Lara Croft?

Firstly, we were not at the filming site of either of the two original Tomb Raider movies – Cambodia and South Africa. Secondly, we were not actually “raiding” any tombs.

But, we were exploring a tomb of sorts and it was in an exotic location.

Several years ago, during a family trip to Egypt, my husband and I had the opportunity to visit some of the pyramids and other historical sites there. They included the renowned Pyramids of Giza and Valley of the Kings.

According to Abu, our local guide who was a former university professor, the ancient Egyptians believed in the afterlife and the pyramids were built as royal tombs to house their kings or Pharaohs.

It took about half an hour to get from Cairo to Giza, the third largest city in Egypt, where the pyramids are located. The van brought us on a road which passed through what looked like sand, sand, and more sand.

Anyway, if you’ve seen pictures of the Pyramids of Giza, they always look like they are in the middle of the desert somewhere ... or so we thought.

The Sphinx guarding the Pyramid of Giza.

A camel and rider at the Great Pyramids of Giza.

The van brought us on a road which passed through what looked like sand, sand, and more sand to reach the 'photo spot' for the Pyramids of Giza.

A few men riding camels passed by. We didn’t have time to go on a camel ride but the van brought us to what our guide said was the best place to get a shot of the pyramids. It was some distance away and from that particular angle, the pyramids looked like they were located in the middle of the desert.

According to Abu, the biggest of the three towering over Giza is the Great Pyramid or Pyramid of Khufu/Cheops. Standing (originally) at 147m or 45 storeys, it was constructed between 2551 and 2528 BCE (Before Common Era).

We only had time to explore the interior of the Great Pyramid, though. For most part, it is solid stone blocks ... and narrow passageways leading to several chambers.

Parts of it were closed off to visitors. Photography was also not allowed in certain areas.

We climbed up a tight and long ascending passageway. A path of wooden boards paved the way upward. The ceiling was low at certain parts and it was rather dark except for a few lights. Although it was not peak season, the place was still crowded with visitors and guides.

A long narrow ascending passageway leads to the King's Chamber in the Great Pyramid of Giza.

You might be a trifle disappointed at the austere surroundings, because the pyramids are said to have been plundered a long time ago.

The passageway was used by both ascending and descending visitors. It was so narrow that there was a massive “people jam”, especially when visitors were unsure whether to go left or right.

At one point, a lady (obviously a Beyonce fan) sang: “To the left, to the left ...” trying to direct everyone. We laughed.

After what seemed like a very long time ascending, we reached what was the King’s Chamber. If you’re expecting to see treasures untold and a mummified Pharaoh, you might be a trifle disappointed, because the pyramids are said to have been plundered a long, long time ago. What remains in the austere surroundings is a sarcophagus which once contained the Pharoah’s mummified remains.

The Valley of Kings housed the underground crypts of famous pharaohs such as Tutankhamun, Seti I and II and Ramses II. Although visitors were not permitted into some of the crypts of the more famous pharaohs, we did get to explore the tomb of Seti II. He was the fifth ruler of 19th dynasty Egypt (1200 to 1194 BCE).

The Valley of the Kings is where Pharaohs from the 18th to 20th dynasties, such as Tutankhamun, Seti I and II, and Rameses II, were buried. Tomb KV15 was used for the burial of Seti II.

There were some faded paintings on the ceiling and walls of the tomb. Once again, any treasures and the actual mummified body of the Pharaoh were no longer there.

Through the years, items have been plundered by grave robbers while some were discovered by archaeologists and then relocated to museums.

What did we think of our first Tomb Raider experience? Not as exciting as in the movies obviously, although we did learn rather a lot about Egyptian history and culture.

Ever wanted to explore inside the pyramids? Sunway launches deal of the year 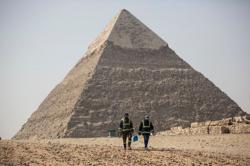