Lucky to see the festival of masks in Bacolod

When the dance anthem blasted away at the main Lacson Street in Bacolod, the Philippines, it signified the start of the annual celebration known as the MassKara Festival.

Groups of dancers from different barangay (villages) put on their beautifully decorated masks with shiny trinkets, native beads, colourful feathers and flowers, with pride. They were getting ready for the dance where a sea of Bacolod people would religiously gather to witness the event every year. All the masks sported smiling faces; there was not a single sad-looking mask anywhere. This is a typical scene during MassKara.

The name MassKara is derived from a combination of the English word “mass” and the Spanish word cara, meaning “face”.

It began after the downfall of sugar prices in the 1980s that affected the city’s economy, coupled with an incident where inter-island vessel MV Don Juan, which was carrying many Negrenses, sank. The tragedies prompted the city’s administration to hold the festival of smile to remind its people to sail through tough times, and the city was given the name “City of Smiles” later.

Celebrated every third weekend of October, the 37th MassKara Festival this year was a vibrant affair. 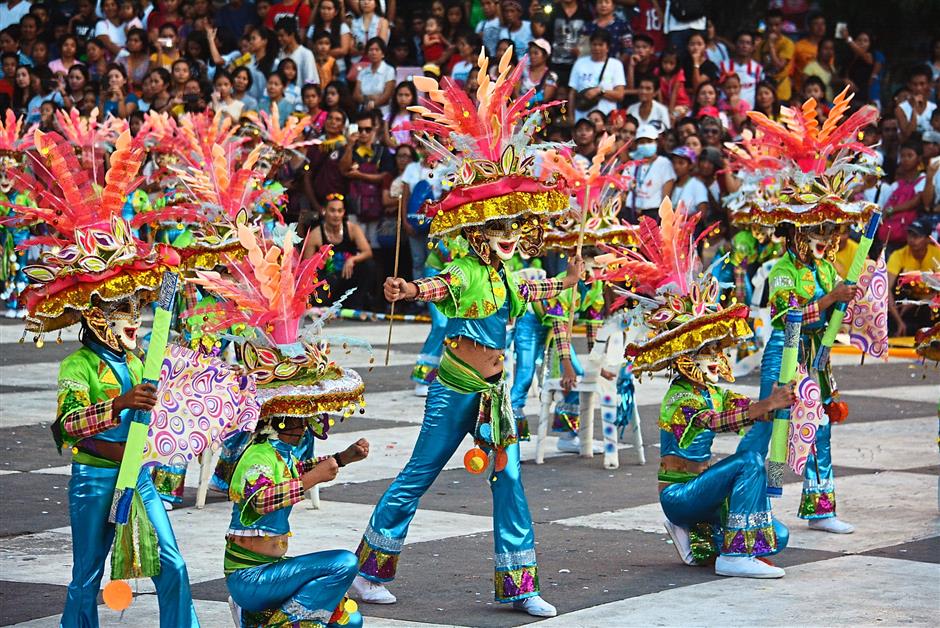 A team of dancers performing at the Bacolod Public Plaza during the Barangay categories competition.

There are major activities such as the MassKara Queen beauty pageant, drum and bugle corps competitions, bonsai exhibitions and fireworks show, food festivals and other special events that might differ from year to year.

The pinnacle of the festival was the dance competition involving 10 schools and 20 barangay vying for the Grand Champion title in their respective categories, at the Bacolod Public Plaza. Using the same dance anthem composed for the festival every year, teams – each one consisting of 40 to 100 people – had to wow the judges with their own unique dance choreography, costumes and mask designs.

I had not heard of the festival prior to this trip, and was struck by the extravagantly decorated masks and costumes as well as the effort spent on the festival. 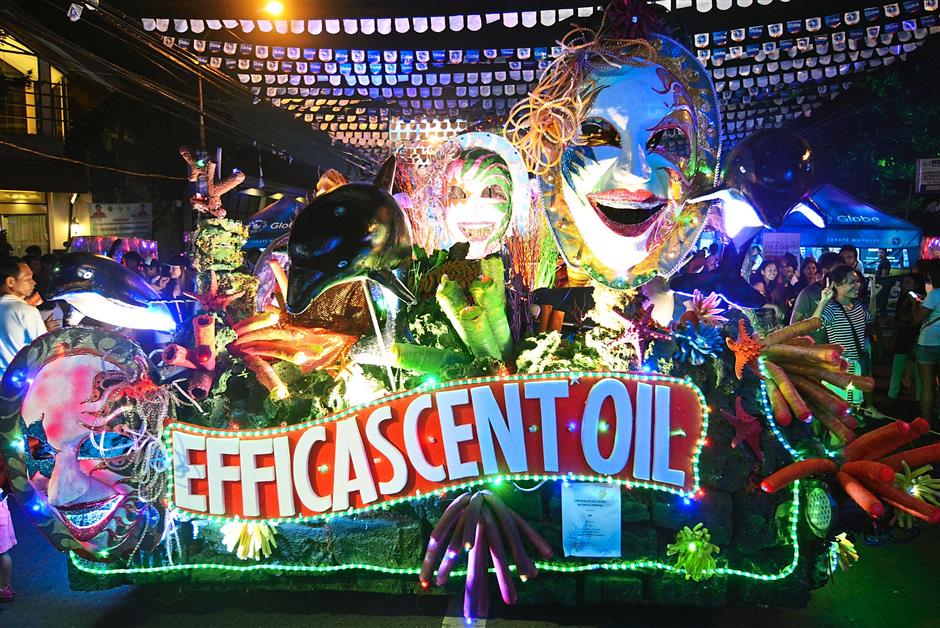 Even the floats are decorated with smiling faces as part of the MassKara Festival.

During the day, the carnival and food stalls took over the streets with colourful masks, and a variety of local delicacies was on sale. It is even more happening when night falls, with local artistes performing on makeshift stages in the middle of the street. By the roadside, tents sold MassKara-themed T-shirts.

Our media group missed the Electric MassKara on the first night but we managed to catch the final showcase the following night. It was a totally different scene as dancers added neon lights to their masks and paraded the streets on floats. The crowd wildly cheered them on. 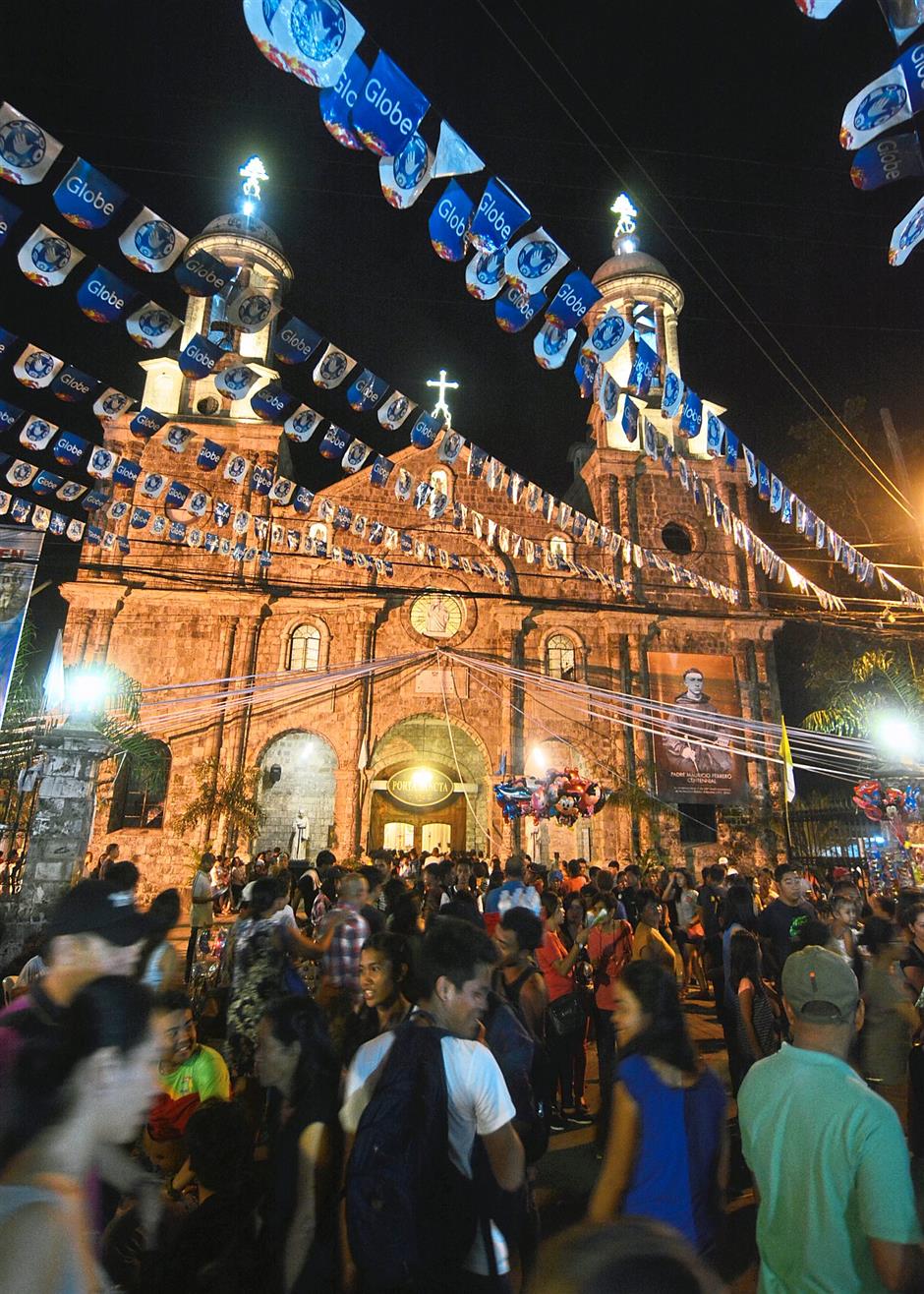 The crowd enjoying the carnival outside the Porta Sancta near the Bacolod Public Plaza where the MassKara festival took place. 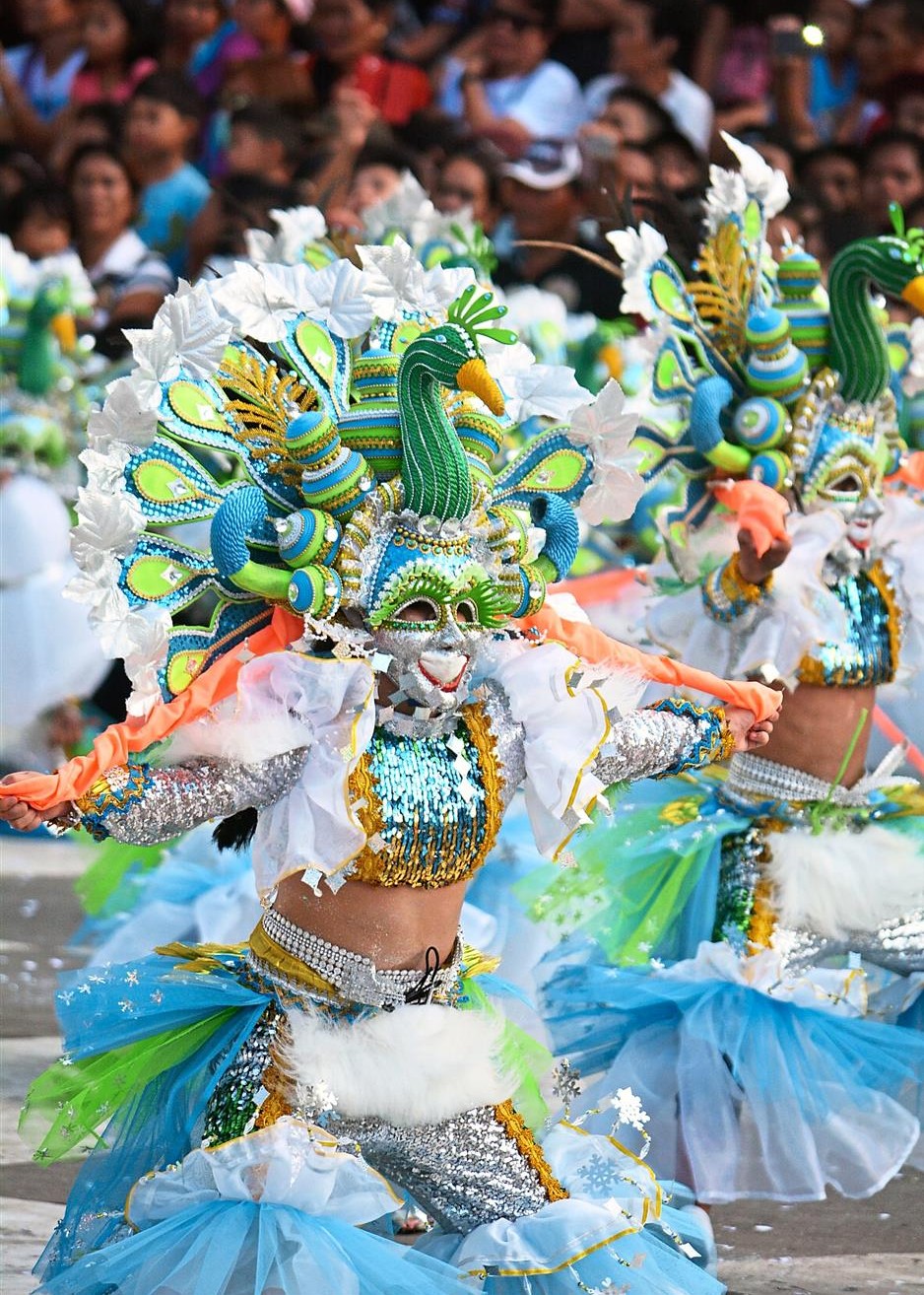 Travellers who wish to experience the MassKara Festival next year are encouraged to book accommodations well ahead of time as hotel rooms are snapped up several months before the event.

Eighty minutes from Manila by plane, Bacolod, the capital of Negros Occidental province, is also known for its huge sugarcane plantations. It is not unusual to see hectares of plantations hugging both sides of the road as one travels to the city from Silay Airport, which is 40 minutes away.

The city is also known for several heritage sites that have stood witness to historical moments. One such site is The Ruins, a mansion built by sugar baron Mariano Lacson in 1911 to commemorate his wife Maria Braga who died while pregnant with their 11th child.

On the eve of World War II, the mansion was burnt down to avoid being used as the headquarters by the Japanese. What was left was the structure of the Italianate influenced building with rows of the letter “M” facing each other as the initials of both Maria and Mariano and the love he had for her. 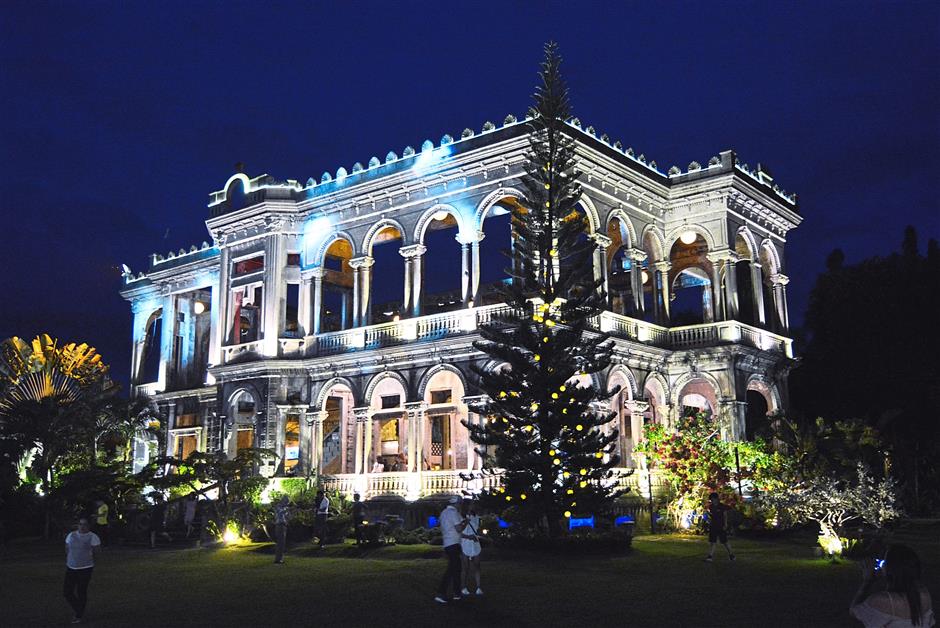 The Ruins is a famous heritage site which has been refurbished and made into a tourist attraction.

The vast manicured lawns that were designed for banquets and events are an ideal place for shutterbugs. The place is being renovated as a tourist attraction.

It was a nice touch that there were some masked people in Renaissance costumes to mark the MassKara. We wasted no time in taking a wefie with them.

Our experienced tour guide Jennylind Quial Demerre Cordero regaled us with the story of the 1898 Negros Revolution. She told of how General Juan A. Araneta ended the Spanish control of the island with hundreds of carts and rolled amakan (woven bamboo mats) that were shaped like a cannon. 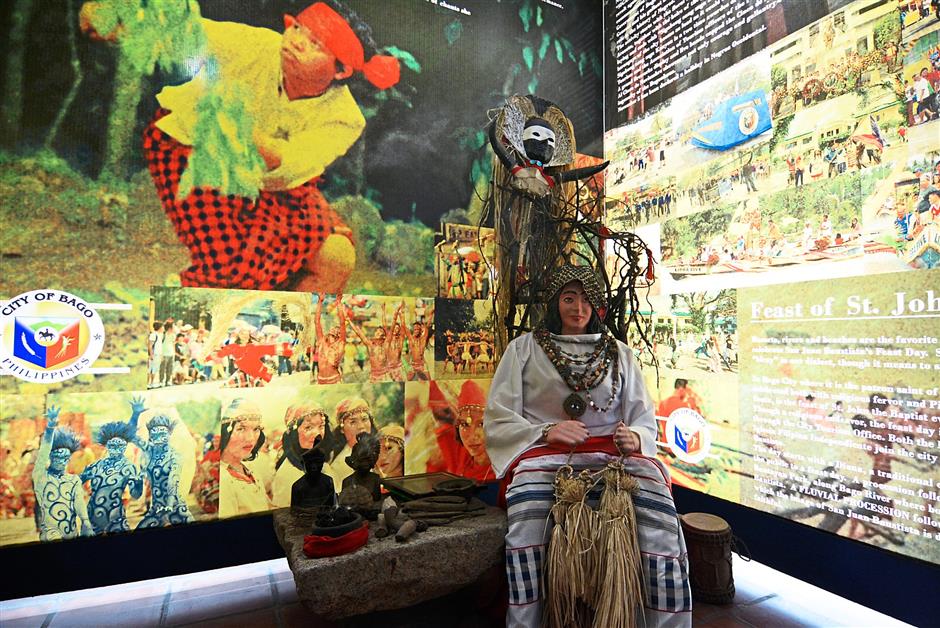 Traditional rituals and the items used in the rituals are being showcased at the Balay Ni Tan Juan, which is being refurbished into a museum.

It was a pleasant surprise to have the late general’s great grandson Clement Del Castillo accompany us on our visit to the intriguing Balay ni Tan Juan, near Bago City, which served as General Araneta’s residence.

The house, which is also referred to as Balay Bato, is a typical brick house built during the Spanish Era. Most of the antiques and artefacts used during the Revolution have been preserved, together with other old works of art that depict that era of colonisation.

The house which is now a museum has had its walls transformed into a depiction of the historical events of that period. There are also old typewriters, calculators and telephones as well as a model of a fake cannon on display. 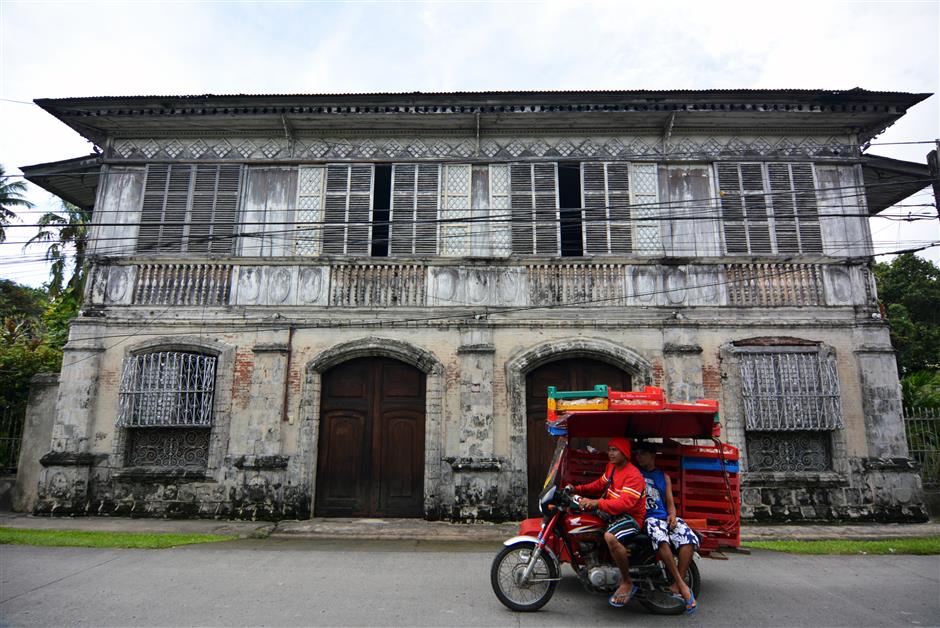 The Balay Ni Tana Dicang built by Efigenio and Enrica Alunan Lizares in 1880 has a Neo classical and Neo gothic architectural design.

Another ancestral house that amazed me was the Balay ni Tana Dicang in Talisay City, 30 minutes from Bacolod town. It was built by sugarcane farmers Efigenio and Enrica Alunan Lizares in 1880 with several huge trees as the foundation. Every inch of the house echoes a Neo-Classical and Neo-Gothic architectural design while the windows are made of Capiz shells framed with wood.

With a strong agricultural background, the city also has its share of organic farms. We travelled north about 30km to Penalosa Farms in Victorias City to see how organic plants and livestock were being managed. 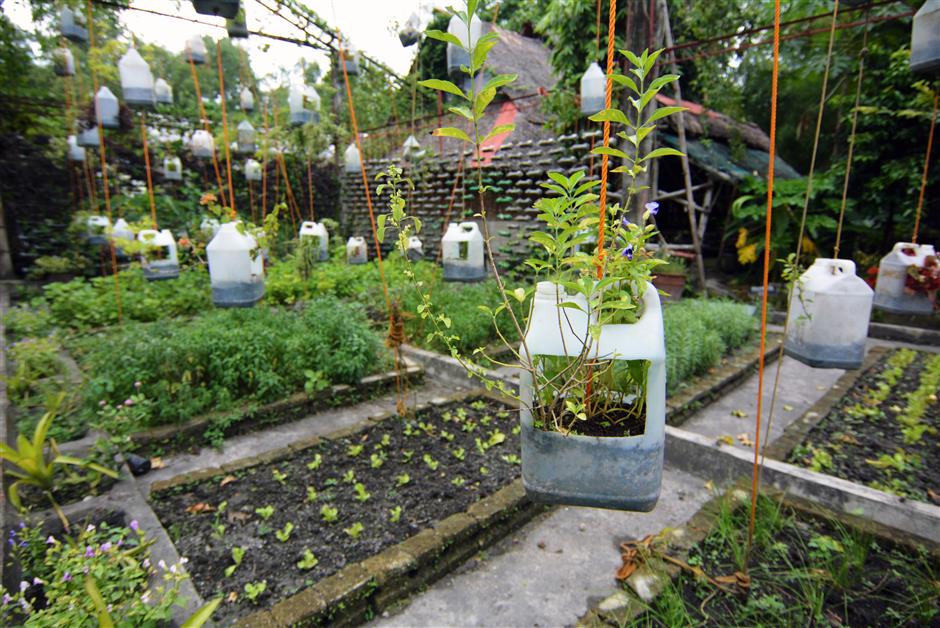 City dwellers like me would be thrilled to experience the huge area of about 4,000 sq m of organic greens and rows of pig pens, chicken cages and other livestock. Farm owner Ramon “Mon” Penalosa Jr has done wonders utilising every bit of space, including the vertical space, to grow vegetables.

As a memorable “parting gift”, Ramon plucked some stevia leaves for us to eat raw, without telling us how it tasted. We put it in our mouths and found that it was sweet.

Ramon explained that the leaves are commonly used as a substitute for sugar.

Oisca Silk Farm, about 25 minutes away from Bacolod town, is another attraction . There, we were shown how silk is produced and harvested. Some of us left the place with a bagful of silk products. 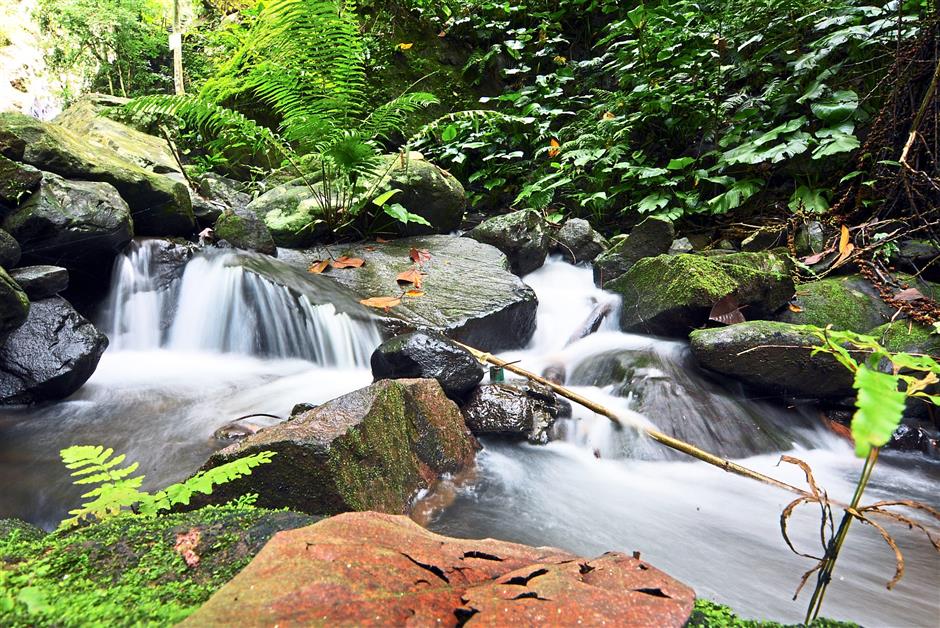 Scenic view of the waterfall at Mambukal Resort.

For those who want a nature retreat can drive 35 minutes away from Bacolod to Mambukal Resort. Visitors can enjoy the warm sulphur dipping pool, Japanese ofuro (bath), boating and wall-climbing activities. Adventure junkies can hike through the dense jungle, with the guides, to search for the seven magnificent waterfalls.

No trip to the Philippines is complete without trying one of their famous delicacies – balut, a developing bird embryo.

I accepted the dare from my travel-cum-roommate Chiu Nai Wen to try balut, which is widely available at night markets. The thought of eating balut is harder to swallow than the egg itself, which I did, eventually. The taste was not as bad as I had expected. And don’t leave Bacolod without trying the grilled chicken from Chicken House, a famous franchise.

Lucky to see the festival of masks in Bacolod