The mystical Sabah fondly known as the “Land below the wind” has astounding mountains, jungles and rivers to put macho 4WD’s and their drivers to the ultimate test of endurance.

And probably the biggest annual celebration of engine power and driving skill against muddy terrain has to be the Borneo Safari.

It’s the camaraderie and teamwork, leaving car manufacturers and brands aside, that brings everyone together in this huge 4WD reunion annually. The event attracts participants from all over Sabah, and neighbouring Labuan, Brunei and Indonesia.

This year was special as it was the Silver Jubilee of the Borneo Safari with the biggest ever entourage of 317 4WDs. They visited the villages in the interior of Keningau and Tenom for a charity drive, donating chainsaws and pumps and erecting football goal posts.

Isuzu Malaysia prepared D-Max monsters as media cars throughout the expedition. These beasts were indeed powerful and robust, yet they kept us comfortable with their spacious interior. Its large cargo area could also carry the usual camping gear and supplies. 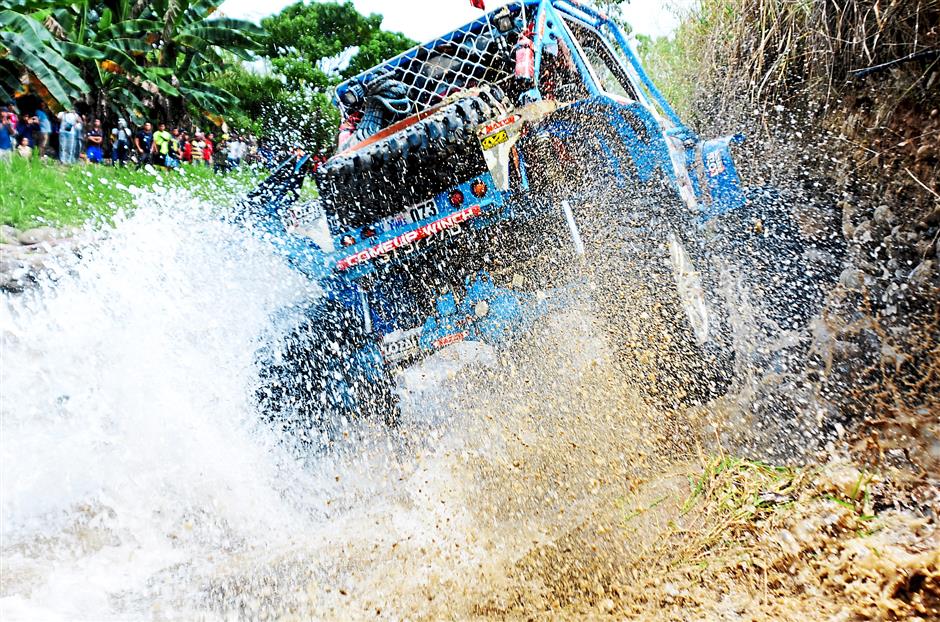 Team Maxxis bouncing en route to a splashing victory at the Borneo Safari 2015.

Although I had never driven a 4WD previously, and it’s been ages since I had driven a car with a manual gear, I found the D-Max intuitive and easy to drive.

A “special stage” was set up for the media team to test drive the monsters. I was apprehensive, but I breezed through the course and wished we had more obstacles to drive through! Driving through a (mild) river would have definitely been fun, says this self-professed water-baby.

We were also shown the technique of descending steep slopes by using gears rather than brakes as one would instinctively do. It took some getting used to, and it was a good technique to know.

The key to navigating a route or obstacle safely is to learn the hand signals given by the co-driver.

Andre Norbert, President of the 4WD Club of Penampang, Sabah says, “It’s very important to trust your co-driver when he gives instructions outside the vehicle. I do not look at anyone else except him.”

Approximately 160 cars tagged on to the Borneo Safari as non-competitors. They were in it to experience the mystique of Borneo, and to put their 4WDs to the test in crossing rivers and obstacles. 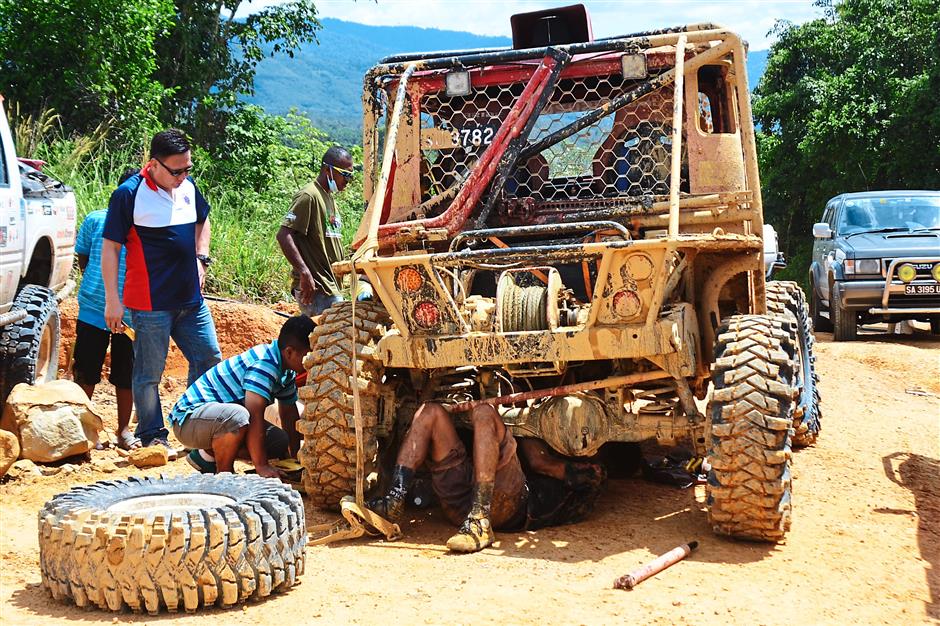 Sometimes repairs need to be made on the fly.

While our entourage escaped with relative ease, the terrain had been dug into deep ruts by the hundreds of car going through. So when the tag-on cars arrived at our campsite one to two days later, the place looked like something the cat dragged in. Nevertheless, they relished the challenge of working together to get each other out of the muddy, sticky, situation.

Experience matters as does a bit of physics. Choosing the right winching point is important too: we saw one car thrown into deep mud, with water up to the driver’s chest in the river, when wrong decisions were made.

Despite the ruggedness of the trail, as long as you have a coffee or drink in your hand, anyone around you will welcome you to sit down for a chat. The conversations and stories shared are truly engaging as everyone listens intently without modern distractions like surfing on smartphones (there is no line in the deep jungle).

This is how real friendships are made, something which is renewed annually in the Borneo Safari alumni.

Camaraderie over cuppas and crucial hand signals make or break one’s journey through the forest. 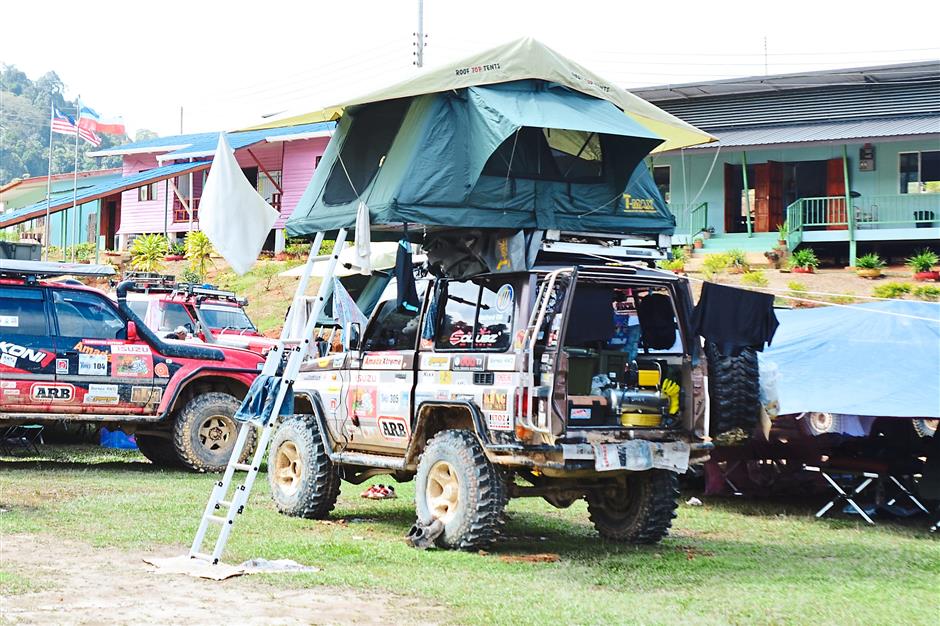 The campsite at Kampung Kelorok was equivalent to a 7-star hotel with a huge “bedroom” area where everyone had set up their own modern camp beds. Set in the Crocker mountain range, of western Sabah, temperatures kept us chilly into the night.

There was a Camp Manager crew who would set up and break camps, and a Chuck Wagon crew which took care of our daily meals so we didn’t have to lift a finger. This village also had proper buildings as our make-shift toilets and piped water into our bathrooms. Now isn’t that glamorous camping aka glamping?

Everyday, the villagers would sell us organic vegetables which they gathered from the surrounding forests, including a type of bitter green, ginger flowers and fern shoots. We also had servings of free range chicken, and noticed the population of chickens depleting as our stay increased!

If it weren’t for the cloudy nights (which brought a bit of rain), we would have starry skies which would have upgraded our “hotel” to a million-star rating. 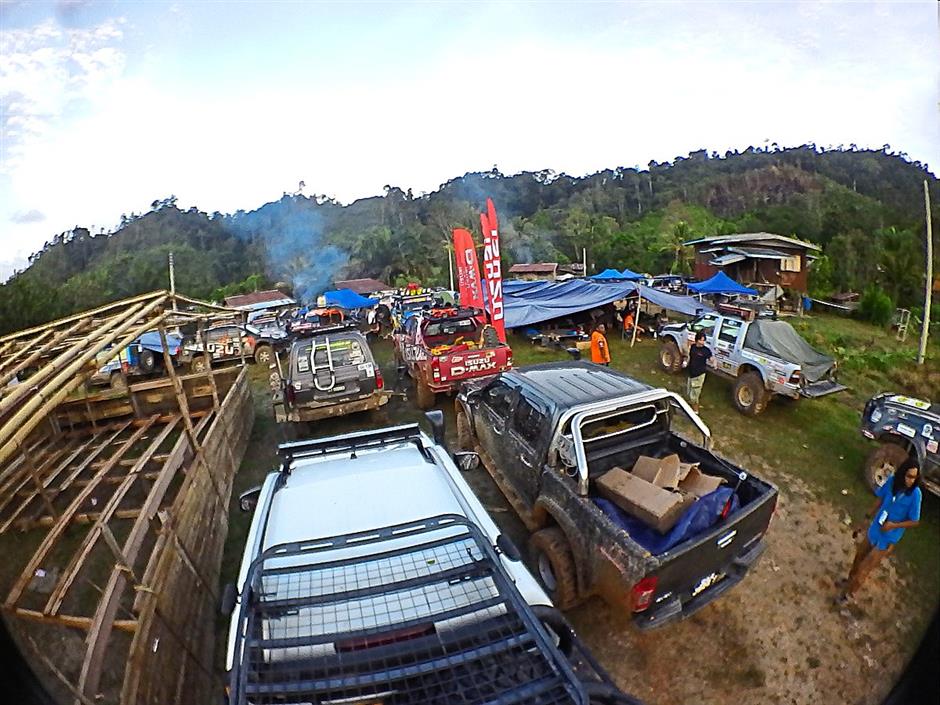 The 7-star glamping site at Kampung Kelorok in Sabah.

Due to lack of rain, the terrain wasn’t as hardcore as we had anticipated. Thoughtfully, we were handed a “survival kit” laden with nuts, cookies, sweets and biscuits to feed our hungry tummies if we got stuck in the mud for long periods of time. The latter didn’t happen and the children in the villages were more than happy to share our stash.

We finally had a taste of the river in Kampung Melalap plus freshly barbequed fish and the village pride, a big vase of tapai, or sweet fermented rice with a little bit of alcohol in it.

To survive the week-long expedition is pretty easy. Bring along a sense of adventure, an open mind and leave your worries and smartphone behind.