Trotting through the Alps of Central Asia

This country on the ancient Silk Road offers excellent mountain adventures and a chance to experience the life of nomadic horsemen.

After 12 hours and two flights from Kuala Lumpur, we finally made it to Bishkek, the capital of Kyrgyzstan.

If you have trouble pronouncing this unusual “Alphabet Soup” of a country name, try this: “kur-gis-tan”. The country is landlocked and it’s bordered by Kazakhstan to the north, Uzbekistan (west), Tajikistan (southwest) and China (east). Just in case you’re wondering, the suffix “stan” means “The land of ...”

More than 80% of Kyrgyzstan is mountainous, thus the country’s nickname, “The Switzerland of Central Asia”. Kyrgyzstan, with its unique topography, offers adventurers some of the world’s best trekking, biking, mountaineering and horse trekking around.

With our guide Ernist (a Kyrgyz) and van driver Mikhail (a big friendly Ukrainian) we were taken to the starting point of our two-day trek in Altyn-Arashan Valley. We took a small back-pack with necessities for one night’s stay while our big luggage was kept in a homestay building in the town of Kochkor.

Set 17km into the Terskey Ala-Too Mountains, Altyn-Arashan can be reached from May-September via a steep, bumpy jeep track running up through the verdant Arashan Gorge (winter snow makes this jeep trip impossible).

We decided to be adventurous and trekked in. The road is very steep in places, passing through pine forests which contain many hidden springs (both hot and cold) and a fast-flowing Arashan river that is perfect for white-water rafting. Along the way, horsemen and their dogs, can be seen.

Half way through the trek, ascending to about 2,400m above sea level, it started to rain cats and dogs – and even hailstones! Cold and wet from both the wind and rain, we felt tortured. 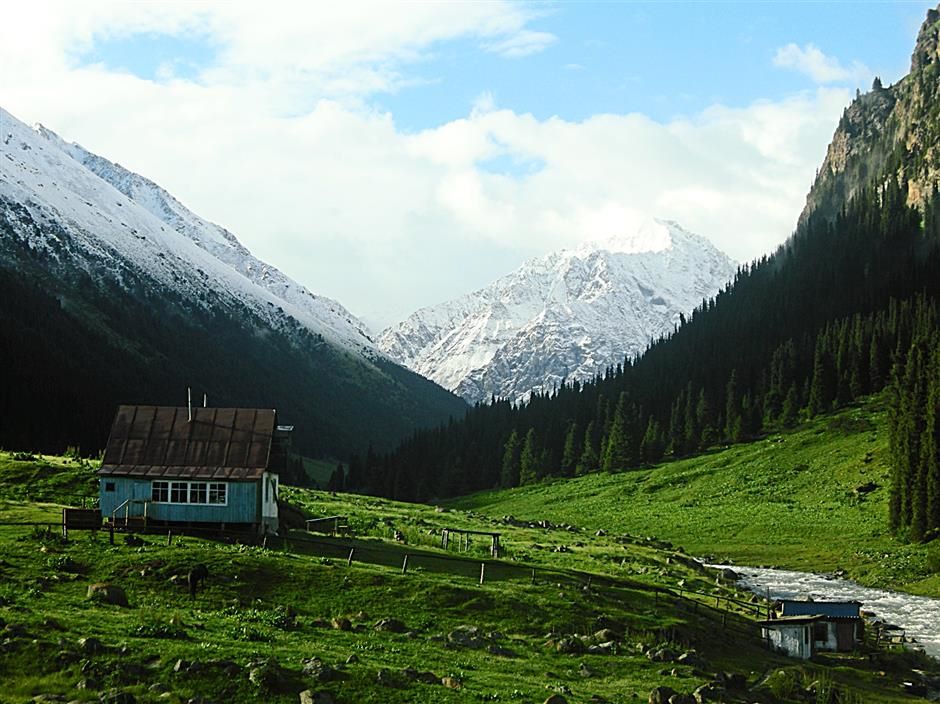 Slow-paced: The Altyn-Arashan Valley in Kyrgyzstan.

It took us about seven hours to reach the hostel which had clean beds in large dormitories, a dinning hall and most importantly, a fireplace, which became our refuge to warm our bodies and to dry our socks and shoes. After dinner, some of us decided to go to the hot sulphur springs to relax and heal our weary limbs.

Our original plan was to sleep in tents but the ground was too soggy from the rain and the winds were too strong. We had no choice but to sleep on the floor and benches in the dinning hall together with three Polish girls as the dormitories had been taken up by some Taiwanese hikers.

Ah, our torture yesterday had been worth it!

After lunch, it was time to trek back to the starting point and it rained hailstones again! After another arduous trek, we were so happy to see Mikhail with the van, patiently waiting for us! Then we headed back to the home stay in Kochkor for dinner and a well-deserved hot bath ...

The next day, we woke up with a bit of anticipation but mostly fear because most of us would be riding horses for the first time in our lives.

We headed to Kyzart pass, some 70km northwest of Lake Song-Köl, where the “horse trek” starts (Song-Köl is a lake at 2,900m in elevation, in the Tian Shan mountains and located 100km west of Kochkor).

Some 16 horses were readied, including one for Ernist, five for the horse owners and maybe another three to carry our luggage. The first question asked was “Who can ride?”.

I and another member, Doc, put our hands up. I thought, “Oh gosh, they are going to give us the difficult horses, no doubt!”

Mine was a grey pony called Courger and Doc’s was a brown white pony by the name of Tiger. Courger was a good and calm horse to ride but Tiger was slightly unruly and had a bad habit of cantering off. 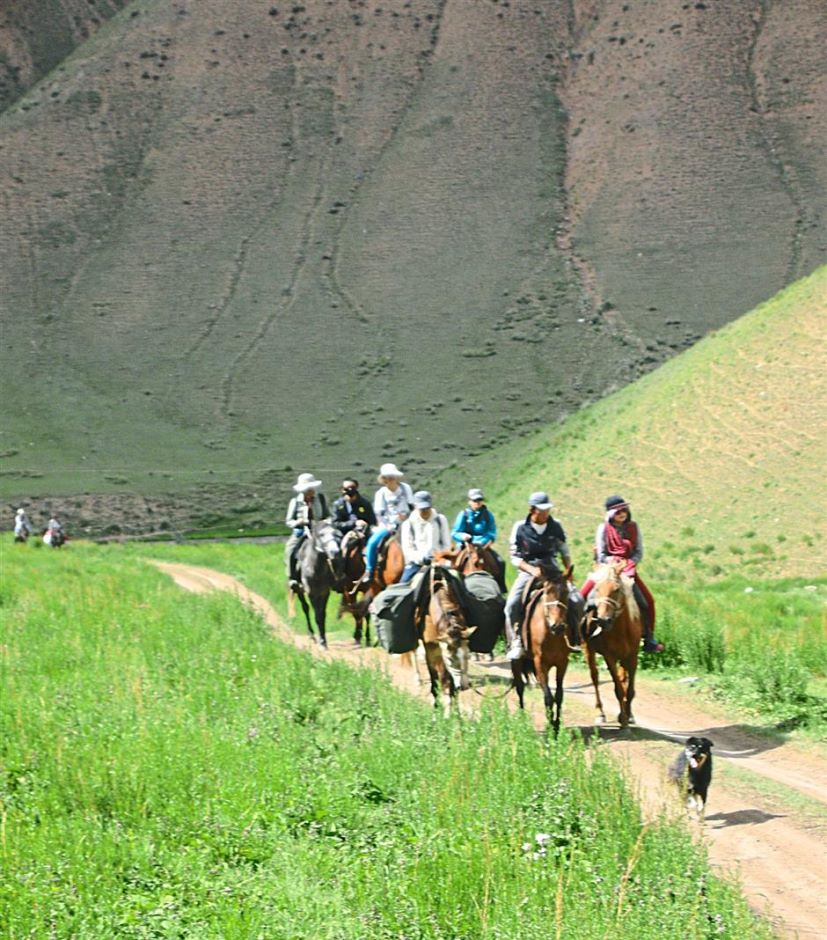 The writer and others on horseback headed for Lake Song Kol with Blackie the dog leading the way.

Over the next two days, an incredible bond between me and Courger would be formed. He cantered steadily with minimal aid whereas some of the other horses were lazy. Otherwise, they were quite well-trained and calm – except when they were teased by horses outside their group.

Don’t ask for a helmet either because the word seems to be foreign to these horsemen, who ride without any headgear. Our group was followed by the faithful dog (whom we called “blackie”) of one of the owners.

I cantered constantly to get ahead so that I could stop longer to take in the view and fresh air. After crossing Kyzyl-Kiya jailoo (the summer pasture for the nomads), we continued over Chaar-Archass Pas (3,061m), and had a picnic lunch by the river with views of the holy Baba-Ata Mountain (4,400m) in front of us.

After this, we followed the trail to Kilemohe jailoo. Upon arriving at the small yurt camp, the horses were tied up and blackie got acquainted with “whitey”, the yurt owner’s dog. We lazed around, had some tea (chay) and snacks (boorsok – pieces of deep-fried dough) which were delicious when eaten with kaimak, a rich and delicious cream. We could also eat our snacks with butter or honey.

There was also kalama – a flat, unleavened bread, made without yeast – which was baked quickly on top of an iron stove. This is the most common sort of bread eaten in yurts of the mountain pastures. We also had kattama – another form of unleavened bread baked especially when there are guests – where the dough is rolled into a thin layer, greased with butter and rolled to a spiral with layers. 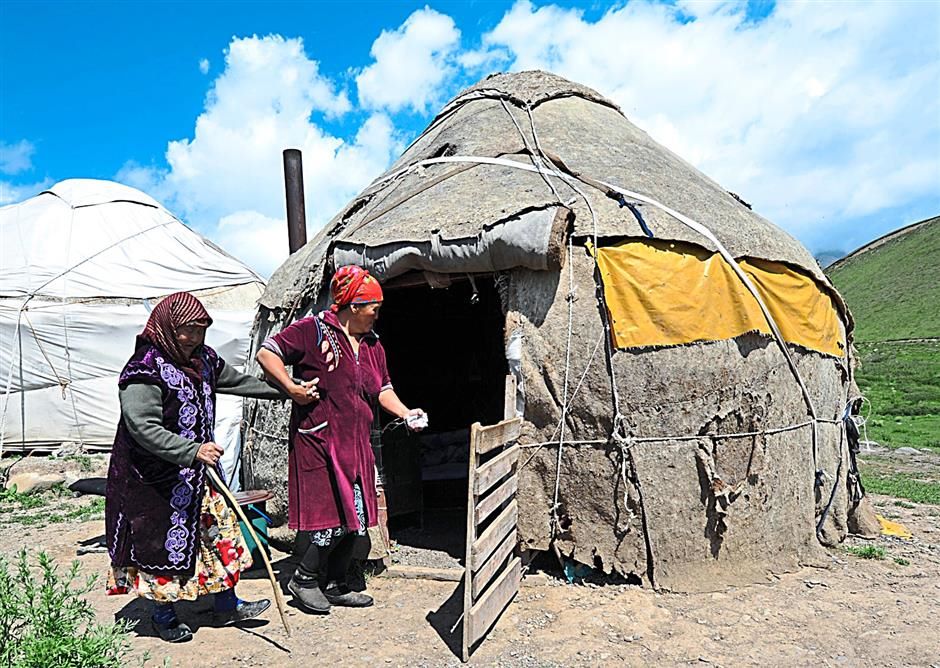 A yurt is the traditional portable dwelling of nomads in Kyrgyzstan. – AFP

Kyrgyz food is good. Other than the heavy milk fat of kaimak, our meals consisted of tea (chay), fresh fish (from the lake) and a thick soup with plenty of vegetables and bread. There is also kesme, thick noodle soup with bits of meat, potato and vegetables, as well as smoked fish.

We spent the night in two yurts, divided according to gender. The men were luckier. There were ten women and six men in our group, and we ladies had to sleep closely, side by side, with very little room to turn.

The next day, three members had to abandon the second half of the horse ride but fortunately, an old Mercedes was available to take them to Lake Song-Köl for a fee of US$50 (RM159) each (luckily, the previous day’s weather had been good and there were no problems driving to the lake).

For the rest of us who continued, the scenery was as breathtaking as the previous day, with superb views of grasslands and mountain ranges, as we climbed to Jagyz Karagai pass (3,400m) and entered the lake basin.

After lunch at Jaman Echki, we followed the lake shore east to Batai Aral and met our yurt host family of Kyrgyz shepherds. Those who took the Mercedes had arrived way earlier and made themselves comfortable in the yurts.

All our horses seemed to know where to head except for one whom we labelled as “a horse with no sense of direction”, as he cantered off to the wrong yurt! After alighting from Courger, I found that my rear was very sore while my shins and shoulders were chapped from the constant rubbing on the stirrups and my own backpack straps. Sitting was rather uncomfortable! 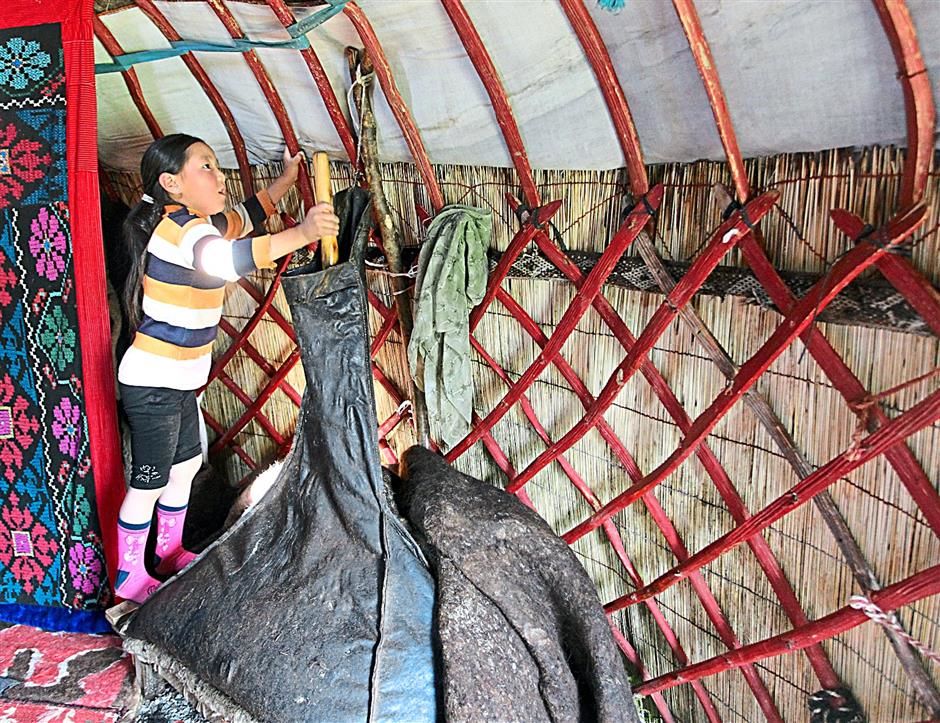 The alpine Lake Song-Köl (3,016m) is one of the loveliest spots in central Kyrgyzstan. It’s 100km in circumference and surrounded by flat monotonous grasslands and mountains. The lake and shore are part of the Song-Köl Zoological Reserve.

All around are lush pastures favoured by herders from the Kochkor valley and beyond, who spend June to August here with their animals. Devoid of electric power and mobile phone reception (except atop one big slab of concrete on the lake shore where you can get a faint signal), Song-Köl is an ideal escape from frenzied city life.

About one dozen yurts around the lake charge a fixed fee for basic accommodation and meals. Other than walking by the lake-shore, dipping in the very cold water, watching herds of cows and horses running about or horse riding through the grasslands, there was not much else to do.

We got to know that one of the nomads was moving his yurt and we offered to help. We also met an elderly man, who was setting up his small provision store – he had an eye for one of our female members though!

We heard the soft ringing of a bell, and saw that it came from a bell around the neck of a small cute donkey carrying two empty cans. This is the famous donkey of Lake Song- Köl that carries water from the lake back to the yurt.

After two days, with sadness, I had to part with Courger, as the horse team had to go back to start another horse-trekking trip. It had been a short “love-affair” between me and the horse.

We caught the beautiful sunset and later, gazed at the star-filled sky. We also had another form of entertainment in the men’s yurt, watching video on an iPad! Fortunately tonight there were three yurts at0 our disposal, one for the men and two for the women.

Early the next morning, we watched cows being milked. The women use a centrifuge to separate fat from the milk taken daily from the family’s 60 cows, to make cream, butter and buttermilk.

After lunch, it was time to head back to Bishkek in the van. We had great memories of Kyrgyzstan to bring back home.

> The population of 5.4 million live below the poverty line.

> Kidnapping of brides is the traditional way a man finds a wife. They call it ala kachuu, or “grab and run”.
Typically, a would-be groom gathers a group of young men, and they drive around looking for a woman he wants to marry.

The unsuspecting woman is often literally dragged off the street, bundled into the car and taken straight to the man’s house – where frequently the family have already started making wedding preparations.

Once the girls are inside the kidnapper’s home, female elders play a key role in persuading her to accept the marriage.

As many as 40% of ethnic Kyrgyz women are married in this way. The practice has been illegal since 1994, but authorities largely look the other way. (http://www.newsweek.com/grab-and-run-1634)

> National languages are Kyrgyz and Russian. The Kyrgyz people probably originated in central Siberia. In their history, they have been ruled by Mongols, Kalmyks, Manchus, Uzbeks and Russians. The country gained independence in 1991.

> For 75 years under the Soviet system, the Kyrgyz Republic was officially atheist. Now, some 75% of the people are Muslim, nearly all Sunni. Another 20% are Russian Orthodox Christians. The remaining 5% adhere to Buddhism, other types of Christianity or Judaism.

> Transport in Kyrgyzstan is severely constrained by the country’s alpine topography. Horses are still a much-used transport option, especially in rural areas.

Road infrastructure is not extensive, so horses are able to reach locations that motor vehicles cannot, and they do not require expensive, imported fuel.

> Kyrgyz people love horses, partly because their nomadic ancestors depended on the animals for survival. One of most popular Kyrgyz sports remains kok-boru or ulak-tartysh, a horse-mounted game that resembles polo, except the ball is, no kidding, a headless goat!

> The currency is called Som. RM1 is about 16 Kyrgystani Som.

> A visa is required for Malaysians visiting Kyrgyzstan.

> Speaking the local language always helps. For hello, you can say pree-vet (in Russian) or salam (Kyrgyz). For thank you, it’s spasibo (Russian) or rahmat (Kyrgyz).

Trotting through the Alps of Central Asia