By MENG YEW CHOONG
You meet all sorts of interesting people on a regatta, like professional sailor Peter Madej. This Pole lives on boats over six months in a year, and moves from port to port with nothing more than a sling bag.

As the Raja Muda Selangor International Regatta heads towards its silver jubilee next year, it has remained one of Asia’s most exciting passage races.

SAILING on a modern sailboat does teach you a couple of science lessons. For one, you can actually sail even if the wind is against you – not in a straight line, but in a zigzag manner!

Well, I got my crash course in sailing during the recent Raja Muda Selangor International Regatta (RMSIR), which saw 36 boats of all shapes and sizes competing for honours (and no prize money at all).

Organised by the Royal Selangor Yacht Club in association with the Britain-based Royal Ocean Racing Club, RMSIR is Malaysia’s oldest keel boat sailing event since its inception in 1989. 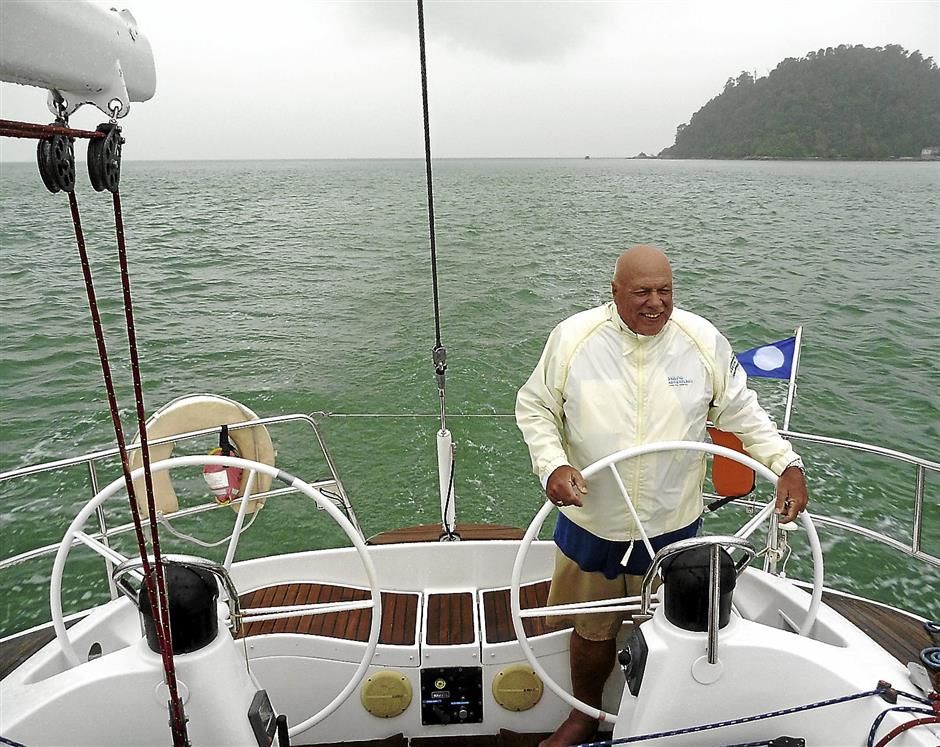 Sailing Adventures, owned by Brian Pozzey (pic), chartered Baby Tonga to give customers – both beginners and old hands – an interesting sailing experience at the RMSIR.

RMSIR remains one of Asia’s most distinguished regattas, covering over 240km of passage races that see boats sailing even at night, starting from Port Klang all the way to Langkawi, while harbour races take place off Penang and Langkawi. For the first time, there was participation from Russia, though Australian boats easily made up half the field in the 24th edition of the regatta that just concluded last month.

I was on board the 16m-long luxury yacht by the name of Baby Tonga, which calls Langkawi its home base. The boat is owned by Hong Kong-based Englishman Garry Smith. The boat was chartered by Australian Brian Pozzey, who invited Smith to be part of his crew for RMSIR.

“Sails are like aircraft wings,” said the jovial Smith, whose business deals with boat charters.

Indeed, modern sails are nothing like those seen in the ancient days, when boats equipped with square sails ruled the oceans.

“Baby Tonga has more equipment for serious racing than other boats in its class,” said Smith, who offers the boat he jokingly calls a “souped-up cruiser” for charter at www.yachtsailingholidays.com.

Despite being built in 1992, Baby Tonga is perfectly at home at RMSIR, as all boats are given a handicap (akin to golf).

“Sailing is about aerodynamics, and hydrodynamics,” said Brian Pozzey, an experienced sailor as well as chef who operates Sailing Adventures in Brisbane, Australia. 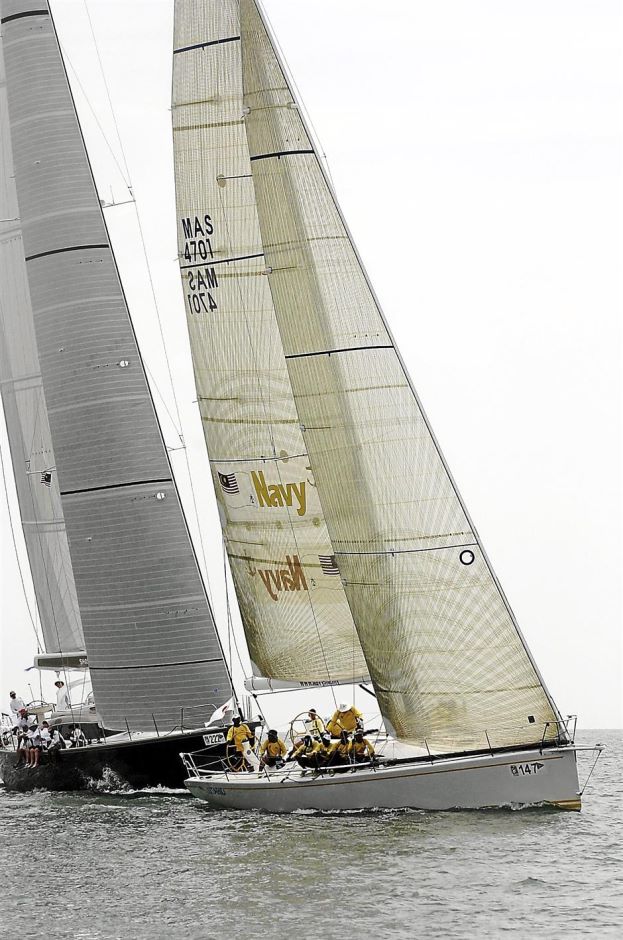 Key factors: Despite their familiarity with local waters, the Royal Malaysia Navy’s boat, Utarid (right), finished near the bottom of its class. This proves that sound judgment of the prevailing wind and tides is important in winning a race.

Hydrodynamics is the study of the dynamics of fluids in motionwhile modern sail aerodynamics have borrowed heavily from lessons learned from aircraft.

The science part aside, sailing from Port Klang to Langkawi over four days, solely by wind power, was a pretty interesting experience. For one, you got to feel how the ancient seafarers made their way around the oceans, with rudimentary navigation aids that included the stars. You also got to see interesting coastlines. Most of all, there was good fun in racing one another.

“Size and boat design does not always guarantee a win. It is about how well you can read the wind and understand the tide,” said Pozzey, who has been sailing since 11.

The race also attracted some professional sailors, such as Peter Madej, who agreed to join Baby Tonga as crew after researching the boat. Madej, 28, started sailing professionally since 19 and has never looked back. Today, he moves from port to port, carrying nothing more than a slingbag. 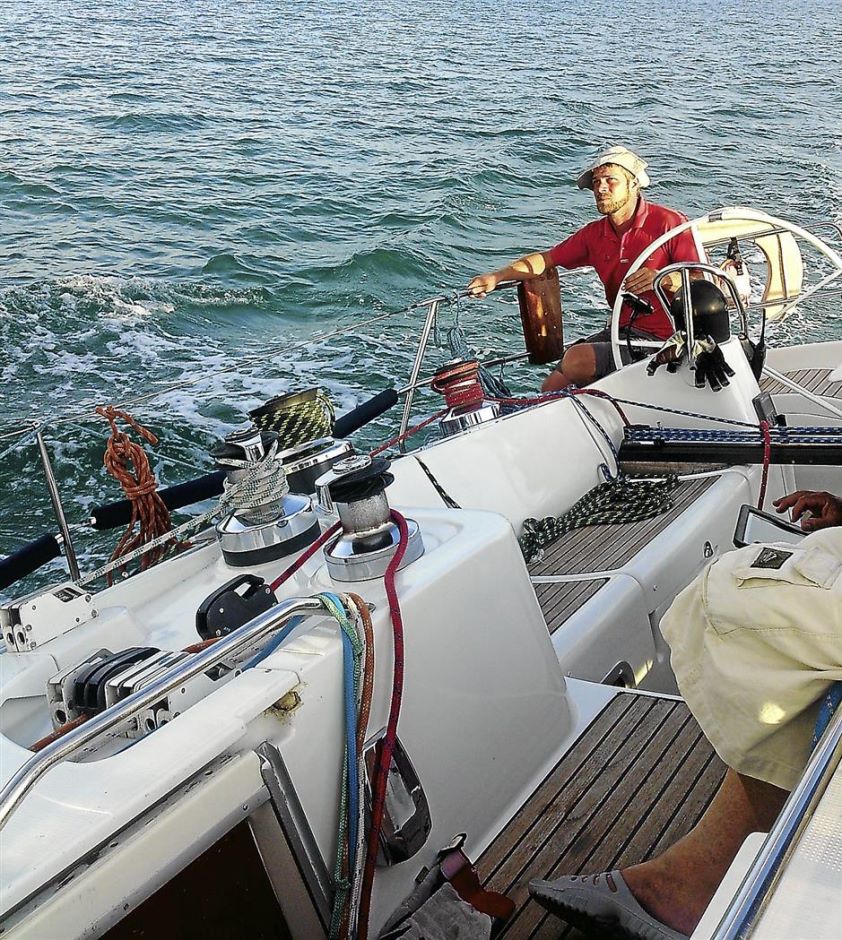 You meet all sorts of interesting people on a regatta, like professional sailor Peter Madej. This Pole lives on boats over six months in a year, and moves from port to port with nothing more than a sling bag.

“I have been sailing since I was five, and my family had a sailing school,” said the Pole who embarked on his first long trip at sea when he was nine.

“You are constantly looking at different wind shadows to find where the best wind is. It is a combination of a good boat and the skill of using it,” said Harris, who also participated in RMSIR through his boat, Nijinsky, that was manned by a five-man crew.

“The other important skill is working out the tide. Sometimes it is pushing you forward, sometimes back. You need to be in a place where it is not as strong, for example, in the shallows, where the tidal effect is less.

“And sometimes you have to gamble that the wind will change in the middle of the night. It is a combination of skill, knowledge and luck.” said Harris, who is also vice chairman of the RMSIR organising committee as well as the Royal Selangor Yacht Club’s Sailing Secretary.

For Pozzey, RMSIR has also turned out to be a business opportunity as he runs a business where people can pay to join a racing yacht.

“It started with a regatta in Australia called the Hamilton Island race week. We have two to three boats and it is now a corporate event.

“The business developed from there. After a couple of years, someone suggested that we should do it in other places, and so we started in Koh Samui (Thailand), Tahiti, and then here in Malaysia. This is our second consecutive participation in RMSIR,” said Pozzey, who is chartering Baby Tonga from Smith for both RMSIR and the following King’s Cup Race in Phuket, Thailand.

It was a referral from a friend that led Pozzey to consider expanding his business to include RMSIR after doing some research on the regatta. “It was good, and we had a lot of fun. RMSIR is different from other regattas as it has three passage offshore races that even run well into the night. Other regattas are mostly in daytime.”

According to Mazlan Shariff, a 58-year-old Malaysian marketing consultant who just did his 10th consecutive RMSIR, the attraction of RMSIR is that there is always something new about it.

“You are sailing from port to port in different weathers. You also meet different people and new boats each year. Half of the people do RMSIR every year, the other half are new,” he said.

On RMSIR, Mazlan added that many Malaysians are not aware of its existence. “It could be due to the lack of publicity, and it could be a case of people not even reading about it, unlike with football or tennis.

“No doubt, the regatta organisers try very hard to promote it, and the promotion is doing quite well overseas, but not in Malaysia. Even friends of mine are not aware about it.”

RMSIR has remained a strong attraction for Englishman John Little, 67, who participated for the sixth time, this time as more of a on-board spectator, rather than an active sailor.

Little’s first taste of RMSIR was in 2002, and he thought that the regatta has featured very good sailors, such as Madej.

“The feeling of being at sea at night is very serene one. And then, you also get to see flying fish, dolphins and local fishermen. But what makes it unique is the overnight passage races, which you don’t get at other regattas,” said the retired production engineer who has travelled to more than 80 countries.

According to Harris, the event is reasonably well-known among expats. “But Malaysians don’t know too much about it, even though we do have quite many Malaysians involved in sailing, some professionally. No doubt, it is a bit hard for people to watch as the event is out there in the sea.”

Other than being a splendid race in its own right, RMSIR also functions as a good warm-up for the ensuing Phuket King’s Cup Regatta (Nov 30 to Dec 6) in Thailand, which coincides with the Thai King’s birthday.

For me, sailing for the very first time afforded me the opportunity to appreciate the power of the sea, the steady push of the tides, and how wonderful it was to see the setting sun from a marine setting. Being on a sail boat is also a way to see physics in action, when the boats lean over at 45° or more, without toppling into the sea.

And I am still wondering why this event remains one of Malaysia’s best kept secrets.

> Next year’s edition of RMSIR (www.rmsir.com), which marks its silver jubilee, will be from Nov 14 to 22. To get a taste of competitive sailing at RMSIR without actually becoming a sailor, check out www.sailingadventures.com.au.