UPDATE: The organisers of Miss Universe 2019 have clarified that Miss Philippines, and not Miss Malaysia, is the rightful winner of the Best National Costume award.

Miss Universe Malaysia, Shweta Sekhon, has won the hearts of pageant fans with her national costume. The 22-year-old was awarded Best National Costume at the 2019 Miss Universe pageant in Atlanta, via online voting.

Named “A Peranakan Indulgence”, the costume was designed by Malaysian couturier Carven Ong who was inspired by the rich heritage of the Peranakan community and its bridal traditions.

The elaborate design sports a bodice of woven Malay brocade songket. It also has a pair of wings made out of Nyonya kebaya fabric, commonly worn by Peranakan ladies.

Arranged around the gown is an array of Peranakan treats such as onde-onde, kueh koci, ang ku, kueh talam, kueh lapis, kueh sago and auspicious red eggs. A traditional basket, the bakul sia, also made an appearance.

Ong is well-recognised for his sumptuous creations. Last year, his dresses were featured in Hollywood film Crazy Rich Asians.

Host Steve Harvey first announced the Philippines as winning the award. The mistake was similar to what he did four years ago, announcing the wrong winner for the 2015 Miss Universe pageant.

"Earlier this week, all the contestants competed in a National Costume contest," he began explaining. "Here's the look at a winner, Miss Philippines..."

The real winner, Shweta, had to correct him. "It's not Philippines," she told the television personality. "It's Malaysia."

Harvey later said that he wasn't at fault. He was only reading from the teleprompter. 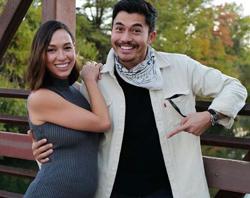 Baggy jeans to oversized jewellery, 90s fashion is making a comeback in 2021
These Malaysian designers are passionate in keeping traditional batik alive Premium
2021 fashion trends to mirror those of last year, say Malaysian style insiders
Are shampoo bars and hair soap a more sustainable approach to haircare?
No traffic jams and no front rows, as Milan Fashion Week goes fully digital
The Queen expresses pride in wearing baju kurung every day
Local designers who are dressing Malaysians beautifully in baju kurung
4 easy beauty resolutions you can follow for all of 2021
Dutch designer under fire for wanting ‘to see Malays dress beautiful again’
Do you know Coco Chanel? These books will introduce you to her timeless style