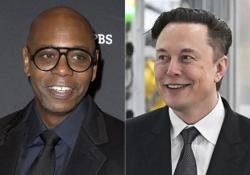 Zabar during a comedy gig in New York. He is the first in the family to use the deli as material for his work as a comedian. Photo: Stephanie Guedalia/Willie Zabar/dpa

There are some New Yorkers who don't know Willie Zabar but they know his great-grandparents' deli, at least.

In the early 20th century, they emigrated from what is now Ukraine to the United States and opened up a delicatessen in Manhattan's Upper West Side, laying the foundations for Zabar's small empire.

Their shop shot to world fame when Tom Hanks and Meg Ryan met in one of the notoriously long lines at the checkout in the rom com You've Got Mail in 1998.

That has not deterred the many celebrities who still stock up on their salmon, cheese, coffee, bagels and household goods at the shop.

Meanwhile you can see the deli's orange logo on cups, aprons, T-shirts and more, thanks to a cooperation with a luxury fashion label.

"It's a specialty food store founded by Jewish immigrants, but that caters to a pan European palate," says Zabar as he sits in a cafe two blocks away. The New York deli Zabar's was founded by Zabar's great-grandparents in the early 20th century and is still run by the family today. Photos: Christina Horsten/dpa

Zabar's is still a family business. Zabar's grandfather and great-uncle, both around 90, run the business. His father has worked there for decades and he and his three brothers also work on and off in the shop.

The 29-year-old currently spends a few hours a week taking care of the deli's social media profiles, and has also done a podcast about it.

Like the rest of the extended family, he lives right round the corner and naturally shops at Zabar's too, especially for coffee beans.

"I can't go if I'm in a rush because I'll see three relatives, I'll see 20 workers I've known my entire life, and they're all basically family," Zabar says."I run into people I know all the time. I run into parents of my high school friends," he says. "It's just a hub, so it's fun."

He is not the official spokesperson for the company, which has around 200 employees, Zabar says, but he is the first in the family to use their small empire as material for his work as a comedian.

"They always say, write what you know. And for most comics that's work and family and mine are just inexorably linked in a way that I think is interesting to people because most people don't work with their families," he says.

"As frustrating as it can be in the moment to be working so closely with relatives, overall, it is a pretty interesting and, I think, endearing dynamic that people seem to enjoy hearing about." Like the rest of the extended family, Zabar lives right round the corner from their deli and naturally shops at Zabar's too.

His surname has never been a disadvantage, Zabar says – in fact, in New York's comedy scene, it has helped.

When he performs "in New York City or somewhere with a big Jewish population", hearing the name Zabar makes people pay attention.

"Especially if you're going up late in a longer show, people are kind of looking at their phones, paying the check or whatever. There's a lot of people who hear Willie Zabar and they kind of perk up."Telling jokes fascinated him as a child, Zabar says.

"My parents both have (a) very distinct sense of humour, as do all three of my brothers, and as the youngest of four boys, it was always a competition for attention, and if you could get out that one line and get a big laugh, it was a great feeling."Zabar followed the scene on television and on stage, also during his film studies, and eventually got a chance to perform himself.

"I just had a great time. I've really never done anything that made me feel that good. So I was like, I got to chase this feeling. I got to keep doing this," he says.

He's now been at it for about five years, and has already made it onto some bigger stages and into some New York media.

But it's a tough scene. New York is a comedy hotspot in the US and countless events are staged every night. The city often hosts stars like Amy Schumer, Chris Rock, Jerry Seinfeld and Dave Chappelle.

"There are so many opportunities for performances here. If you wanted to, you could do several shows every night," he says. "But there are also just so many people here trying to make it in the scene. There's so much good comedy here, even for free, that it's very hard to stand out and get people to your show."

Audiences in New York are used to a high quality level and it's not easy to make them laugh.

"People have heard a lot of jokes, so you have to be really creative, otherwise you're just going to say something they heard two days ago, and you're going to be called a hack."

Alongside punchlines about the family business, Zabar has come up with several fictional characters he plays on stage.

"My main goal is to be able to just perform every night across the city and then perform elsewhere in the US. And then other countries on a regular basis. That's my main goal," he says.

Each night is a "constant chase", the comedian adds.

"Each time a show is the biggest, it feels like the most important show. I get that kind of nervousness that I had the first time and then every now and again when it goes really well, I feel like I'm back there."Beyond comedy, he and his three brothers also volunteer for the fire service in their spare time. Zabar says he tries to bring a little comedy into the explanatory work that is important for this, for example on smoke detectors.

His family supports him – but also keeps telling him that he could just work at the shop, says Zabar. However, that is not his plan at present.

But the fact that every conversation somehow always has to do with Zabar's doesn't bother him either.

"I do like when people complain, because people comment all the time," he says. "People are like, 'the strudel used to be different. They used to have chunks of cherry'."