Canadian atmospheric scientist Hayhoe says, 'Fear will wake us up, but fear is not the motivator for long-term action.' Photo: AFP

With a sunny smile to the camera, Alaina Wood delivers a burst of "good climate news" to her young TikTok audience, trying to reassure them that it is not too late for action on global warming.

This cheerfulness is not because Wood has somehow failed to notice the litany of storms, floods and heatwaves battering the world and the dire projections of what is to come if fossil fuel emissions are not slashed.

But the 26-year-old sustainability scientist – along with others working on climate change – worries that the barrage of bad news is causing "climate doomism", a sense of hopelessness that they fear may undermine action.

"I took a deep dive into optimism," said Wood, whose day job is in waste and water systems and who posts to her more than 300,000 followers under the name @thegarbagequeen.

The aim is to inspire action.

"If I'm going to talk about the harsh realities of it, I'm going to give them something to do with that anxiety," the American said.

Her positive climate videos, filmed at home in Tennessee or while hiking in the countryside, cover everything from the recovery of a threatened species to early-stage technology for decarbonising cement.

A major new US climate and health bill, signed into law in August, has proven a useful counterpoint to those who say "voting doesn't matter", she said.

Wood said she sees the sentiment that it is "too late" to do anything, mainly from users in the US or other wealthy countries, adding that people in the direct path of the most severe climate impacts do not have the option to give up.

The most downbeat tend to be teenagers, she said, echoing concerns about high levels of climate anxiety among young people worldwide.

One survey of 16- to 25-year-olds in 10 countries found almost 60% were very worried about climate change.

Because every fraction of a degree matters as the planet heats, climate scientists say it is never too late to act to cut fossil fuel emissions – although delay makes impacts worse and actions harder and more costly.

But the nearly 1.2ºC (34ºF) of global warming since pre-industrial times has unleashed devastating extremes. It can be difficult to look on the bright side.

"Even my most optimistic followers are turning to climate doom because of all the climate disasters this summer, and I don't know what to do," Wood wrote on Twitter in late August.

The resulting online rows – over whether fear or optimism are the correct response – led her to contemplate a temporary break from social media.

They also reflect an intense debate among scientists, activists and in the media on how to talk about the enormous scale of the threat to humans and the natural world without overwhelming people.

"Fear will wake us up, but fear is not the motivator for long-term action," said climate scientist Katharine Hayhoe, who has written a book on the subject.

"You need hope when things are dark. Hope is the chance that there is a better future that's possible if you do everything you can to work towards it."

While climate denial has in recent years sunk to the murkier depths of the Internet as impacts become harder to ignore, Hayhoe said "doomerism" is taking its place.

"If we decide there's nothing we can do that will make a difference, we will do nothing," she said earlier this year.

"And if we do nothing, we are doomed."

Even people who feel they have done their bit – giving up meat or cutting out air travel – fall into despair, Hayhoe said, partly down to an "obsession with individual action" in the US and other wealthy countries.

She believes that while people are "hardwired" to act for the good of the community, that is undermined by a consumerist system.

But the former research scientist said those behind XR's creation in 2018 were not motivated by hope or despair.

"It was from a sense of determination to see change happen," she said.

Likening the need for the bitter truth to a cancer patient wanting an honest diagnosis, Bradbrook said it was important to understand the causes of the climate, biodiversity, health and inequality crises.

And then have agency to act.

Even if the situation was irredeemably dire, she said, "What else are you wanting to do with your life?"

Wood remains upbeat on her path of optimism and proud of the impact of her videos, including getting her TikTok followers to call the White House asking President Joe Biden to declare a climate emergency.

"We can make the future better," she said.

"It may not be the best, because the best would have been if we prevented climate change from happening in the first place. But we can make society better and healthier." – AFP Relaxnews

How US native groups are repairing lands damaged by colonisation 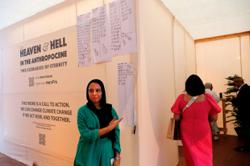 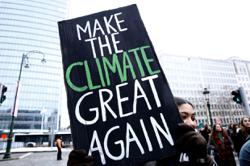