Four tragic stories of death on Yablunska Street in Ukraine Smagliuk (right), at the funeral of his relative Romaniuk at a cemetery in Bucha, on April 19. Romaniuk was shot dead while both men were riding bicycles together on Yablunska Street in Bucha on March 6, during the Russian occupation. Photos: Yasuyoshi Chiba/AFP

They all had different paths to death on Yablunska Street in Bucha, Ukraine: A risky evacuation, a borrowed bicycle, a wounded parent.

One among them was even Russian born.

But at the end of it all, at least 20 people in civilian clothes were found on a stretch of the street – victims of what are widely alleged to be war crimes by Russian forces.

AFP and other outlets' images of the dead – who were mostly shot and left to decompose on the road for weeks – fuelled fresh outrage and sanctions against Russia as well as more aid for Ukraine's fight to save itself.

Questions far outnumber answers about the killings, but a picture is emerging as investigators open probes and witnesses detail the terrible things that happened on Yablunska (Apple Tree Street).

Ukrainian prosecutors said on April 28 they were investigating 10 Russian soldiers for alleged war crimes in Bucha, saying the suspects were accused of holding civilian hostages and inflicting injuries to extract information. Russia denies any involvement in civilian deaths.

These are stories of the dead.

A burst of gunfire

"We left together, I came back alone," said Oleksandr Smagliuk, 21, his blue eyes fixed and blank as he began to recount the morning of March 6.

The Russian tanks had been in Bucha for more than a week. The Ukrainian counter-offensive launched days prior was unsuccessful – and the invaders' stranglehold was beginning to tighten on the key town on the road to Kyiv. At the time he was shot dead, Romaniuk, 58, was riding his bicycle, with Smagliuk, 21, his niece's boyfriend, to the military hospital in the neighbouring city of Irpin. Photo: Mykhailo Romaniuk family/AFP

The evacuation of Bucha's inhabitants became more and more risky, then impossible. The city was already cut off, without electricity, water and mobile phone service.

On March 6, at 10.30am, Mykhailo Romaniuk, 58, was accompanying Smagliuk, his niece's boyfriend, in an effort to visit the younger man's father, who was in hospital after being seriously wounded by a shelling attack.

Smagliuk and Romaniuk also thought they would find electricity there to charge their phones.

They pedalled together and arrived in a few minutes on Yablunska Street. Then the shooting started.

"We didn't see anybody. I didn't realise until the end where the shots came from. I just heard gunfire and saw him fall. I turned down a lane to escape," Smagliuk said.

Residents told AFP they heard and saw gunfire from numerous directions during the occupation, raising the likelihood that more than one shooter had carried out the killings on the road.

Without the inhabitants grasping it immediately, the street leading to Irpin had become the outpost of Russian units that had taken the town.

Tanks were positioned in residents' gardens and on the street, barricades were set up and troops were deployed in surrounding buildings.

"The first thing they did was to set up and shoot at everything that moved, everyone who approached. They even shot at statues," said Bucha police chief Vitaly Llobas.

Romaniuk's body remained for 28 days on a stretch of pavement with a yellow and white curb – his swollen face turned to the side in a grimace, orange gloves still on his hands.

His corpse was collected on April 3 following the liberation of the city.

His death certificate cites "ballistic cranial trauma, caused by a penetrating bullet... multiple cerebral lesions and fracture of the cranial cavity", and concludes: "automatic weapon injury with intent to kill".

These sterile descriptions gave no indication of who he had been in life.

He was a construction worker in Bucha, a growing area that enticed families from Kyiv looking for a peaceful life, with nature close by.

"He loved to sing, he was a joyful man, and a bit of a drinker," recalled his sister-in-law Viktoria Vatura, 48, miming a drinking gesture with her thumb.

Romaniuk was buried on April 18 without ceremony, and without a priest; each of the four members of his family said a few words at his grave in Bucha.

"A simple man who loved life and had never hurt anyone," said Vatura. Kovalenko and his daughter in happier times. When Kovalenko arrived on Yablunska street on March 5, he put his hands up to present himself to a checkpoint manned by Russian soldiers. Still, the troops opened fire at him. His wife and daughter survived the attack by running away. Photo: Kovalenko family/AFP

Hands up at Russian checkpoint

While it was still possible, Mykhailo Kovalenko, his wife and daughter tried on March 5 to escape Bucha by car.

Intense fighting had trapped people in the area, and not only was there a risk of deadly shrapnel and bullets but the water supply to homes was also cut off.

When the 62-year-old arrived on Yablunska, he "got out of the vehicle with his hands up" to present himself to a checkpoint manned by Russian soldiers, said Artem, the boyfriend of Kovalenko's daughter, who spoke on condition that his full name not be published.

Still, the troops opened fire, said his daughter and his wife, who survived the attack by running away.

His wife was seriously shot in her leg as she ran, Artem added.

Her husband's body, shot at close range by the soldiers, lay on its side on the pavement of Yablunska for 29 days in his blue parka and smart beige trousers.

It was a brutal and sudden end for a man who loved classical music and collected stereo equipment, but also treasured walks in the bucolic Bucha landscape.

Kovalenko's relatives identified him by his clothes in a photo taken from afar by AFP on April 2.

"It was horrible," Artem said.

On April 18, Artem was called to the Bucha morgue to identify the body. His girlfriend is now a refugee and being treated in psychiatric care in Bulgaria "and wakes up every night" after witnessing her father's killing.

Kovalenko was buried in a black coffin in Bucha on April 18, with Artem and two other relatives as the only mourners, an AFP journalist saw.

Blood pooled under Maksym Kirieiev's body, which lay face down at the roundabout of Yablunska and Yaremchuka streets, near pallet loads of paving blocks outside a building site.

His corpse was one of three at the spot shown in a haunting AFP photo, including one with hands bound behind his back using the type of white cloth strips that Ukrainians have worn to mark themselves as non-combatants.

Up to that point the 39-year-old construction worker had dodged the Russians and survived by taking refuge in basement hideouts, said Iryna Shevchuk, 52, an acquaintance who grew into a friend during the invasion.

"Everyone called him 'Maksym the fearless'," she told AFP around 100m from where traces of his blood still marked the ground over a month after his death.

Part of that moniker was his willingness to help people who needed to move between shelters.

His final moments came after weeks of Russian military occupation, something he documented in videos and messages even after Shevchuk evacuated in mid-March due to lack of food.

Then on March 17 he and at least one other man set out from their refuge – Kirieiev was going to get a change of clothes from a nearby construction site, Shevchuk said.

He never came back.

"It's very important to get justice for Maksym, because if we don't punish them, they (Russians) will do the same in the future," Shevchuk said. 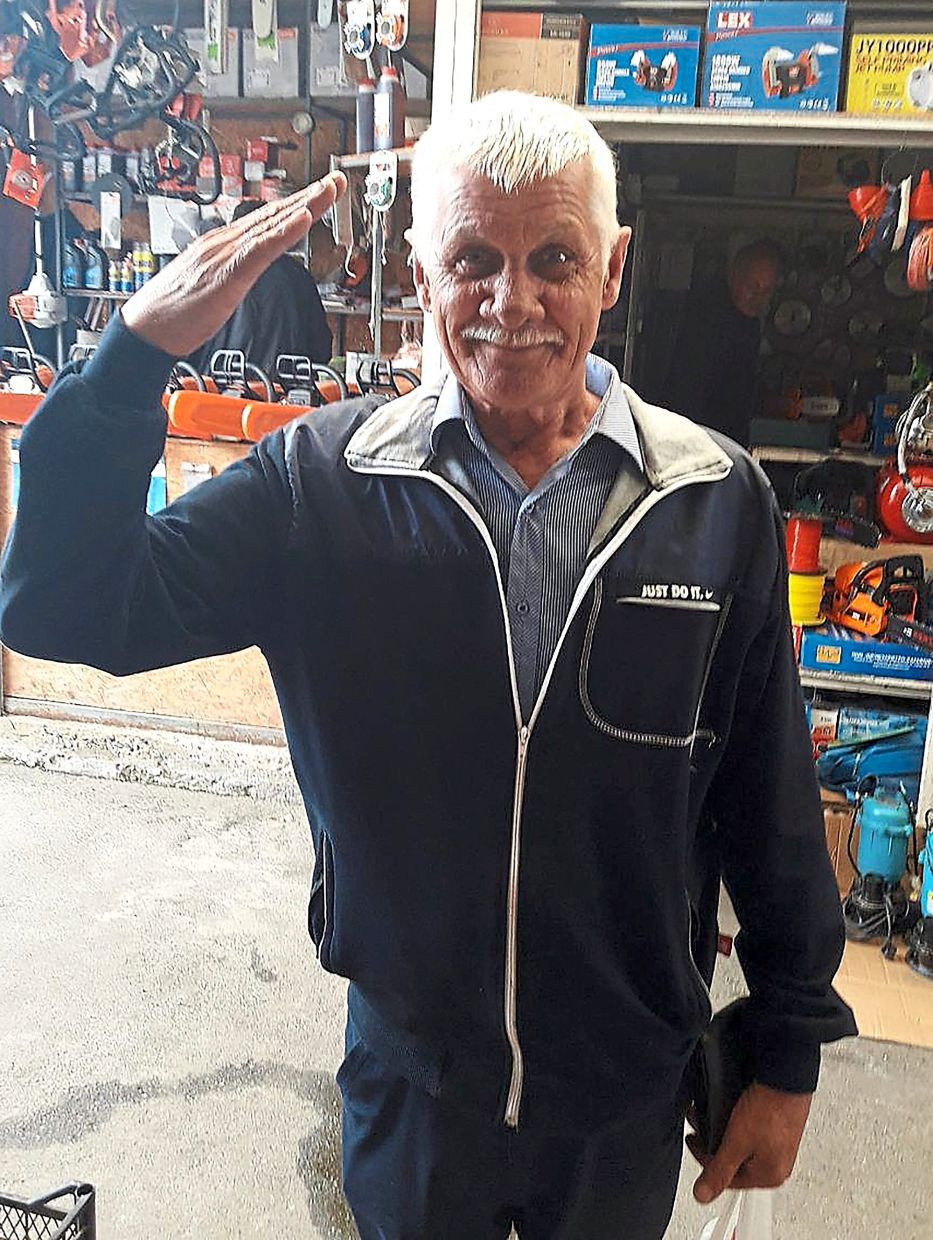 Brovchenko was returning a borrowed bicycle on that fateful day on Yablunska street. Photo: Svitlana Brovchenko/AFP

Volodymyr Brovchenko had something he had to do.

"That day he needed to bring the bicycle to Vorzel – he worked in Vorzel," said his sister-in-law Natalia Zelena, referring to a neighbouring town.

"He had borrowed the bike from someone and on that day, he just needed to bring it back," she added, noting he'd held various jobs in his life, including woodworking.

His wife tried to dissuade the 68-year-old from making the trip, given the dangerous situation, but the father of two children set out on the trip nonetheless.

He was shot dead while pedalling up Yablunska around March 5.

His wife Svitlana Brovchenko and Zelena identified him from the AFP photo showing his body on Yablunska.

A neighbour tried to pull his corpse from the street, and that man ended up getting shot too.

The neighbour, however, survived, said Zelena, 63.

Brovchenko thus lay on the pavement with a blue bike for weeks, until his body was retrieved after the Russians retreated.

"He himself was from Russia, somewhere from Gorkovsky district," said Zelena. "But he'd lived here since 1976." – AFP

'Fortress in a city': Ukrainians cling on at steel plant in Mariupol 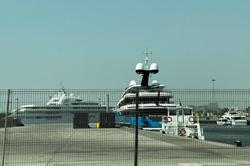