Bella has won various competitions as an apprentice in Switzerland, where she currently lives. Photos: Bella Kamaruddin Jeunehomme

As a child, Bella Kamaruddin Jeunehomme remembers her grandmother waking her up early during the fasting month to make all sorts of traditional cookies for Eid.

“Every morning during Ramadan she would wake us up and we would end up staying in the kitchen till late making all sorts of cookies. She loved to make roti paung as well, a must-have buttery brioche kind of bread,” shared Bella via email.

“(Due to those experiences), baking has been my passion since I was seven years old.”

Today, the 26-year-old pastry chef from Kuala Terengganu has carried that passion with her all the way to Switzerland, where she currently lives with her mother and stepfather.

Bella moved there nine years ago after completing her O-levels in Malaysia.

“When I first arrived in Switzerland, it was difficult because I spoke little French and I had to learn it in order to adapt to the country,” recalled Bella. 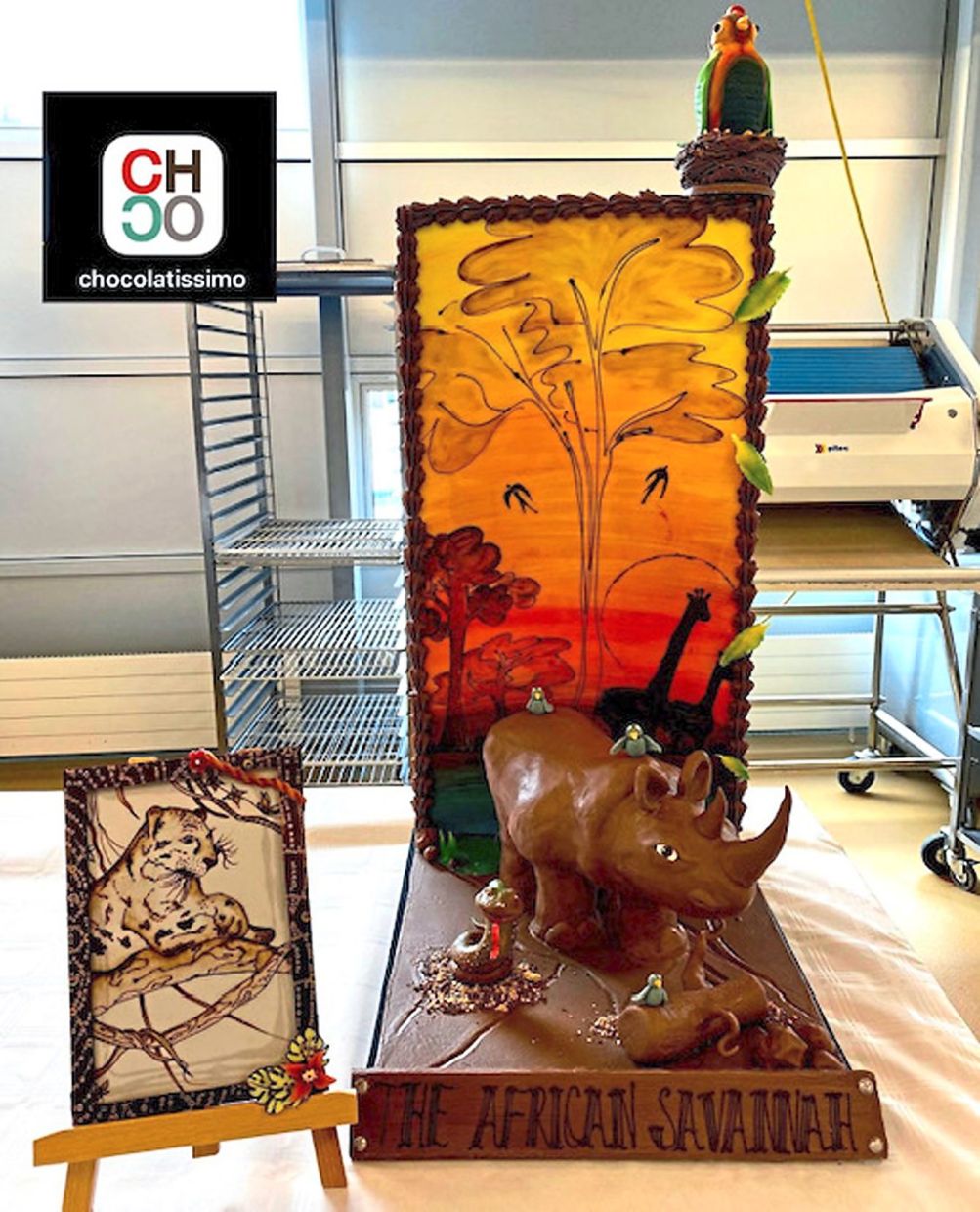 She then enrolled for a pre-apprenticeship class in Ester, a college in the state of Neuchatel, and later found an apprenticeship as an intern chef at a fine dining restaurant.

However, she quit after a month, realising that pastry was where her passion lies.

“I started to wonder if moving to Switzerland was the best option, but I never gave up. While waiting to find a suitable place, I would bake birthday cakes for friends and acquaintances because there was no way I could stay home and do nothing.

“My parents were always there for me and they never gave up on me. They always told me to have faith, patience and to believe in myself,” she said.

A year later, she secured an apprenticeship at La Chaux de Fonds in Neuchatel at a bakery called Au Coeur de France.

After her third month there, she took part in the national Swiss Bakery Trophy competition in 2018, with the support of her boss Gerald Meyer. Bella took home the gold medal in the Chocolatissimo chocolate sculpturing competition 2019 with this creation.

“He encouraged me to create my own idea – I made a Christmas log called La Bella Buche and we won a silver medal for it,” shared Bella.

Her winning streak didn’t stop there.

During her second and third years of apprenticeship, she participated in Chocolatissimo, a chocolate sculpturing competition in Neuchatel as well where she won two gold medals in a row, in 2019 and 2020, and also a Richemont (a well-known pastry school) special award.

Bella recently completed her three-year apprenticeship, during which she said she also “fell in love with confectionery”.

Although she did not finish as the best apprentice in the state for her final exam, she was offered to take part in the final competition for young confectioners from Romandie and Ticino, as the person who won best apprentice in her class did not want to participate in it.

“My boss suggested that I take part in the competition. He knew that I liked competitions and also I felt that I had a lot to prove. He supported me throughout the preparation, with my former professor Jean Pierre Lecompte.”

To her delight, Bella won third place in the competition, held this year, which saw the best intern from each state competing for the Swiss intern champion title. 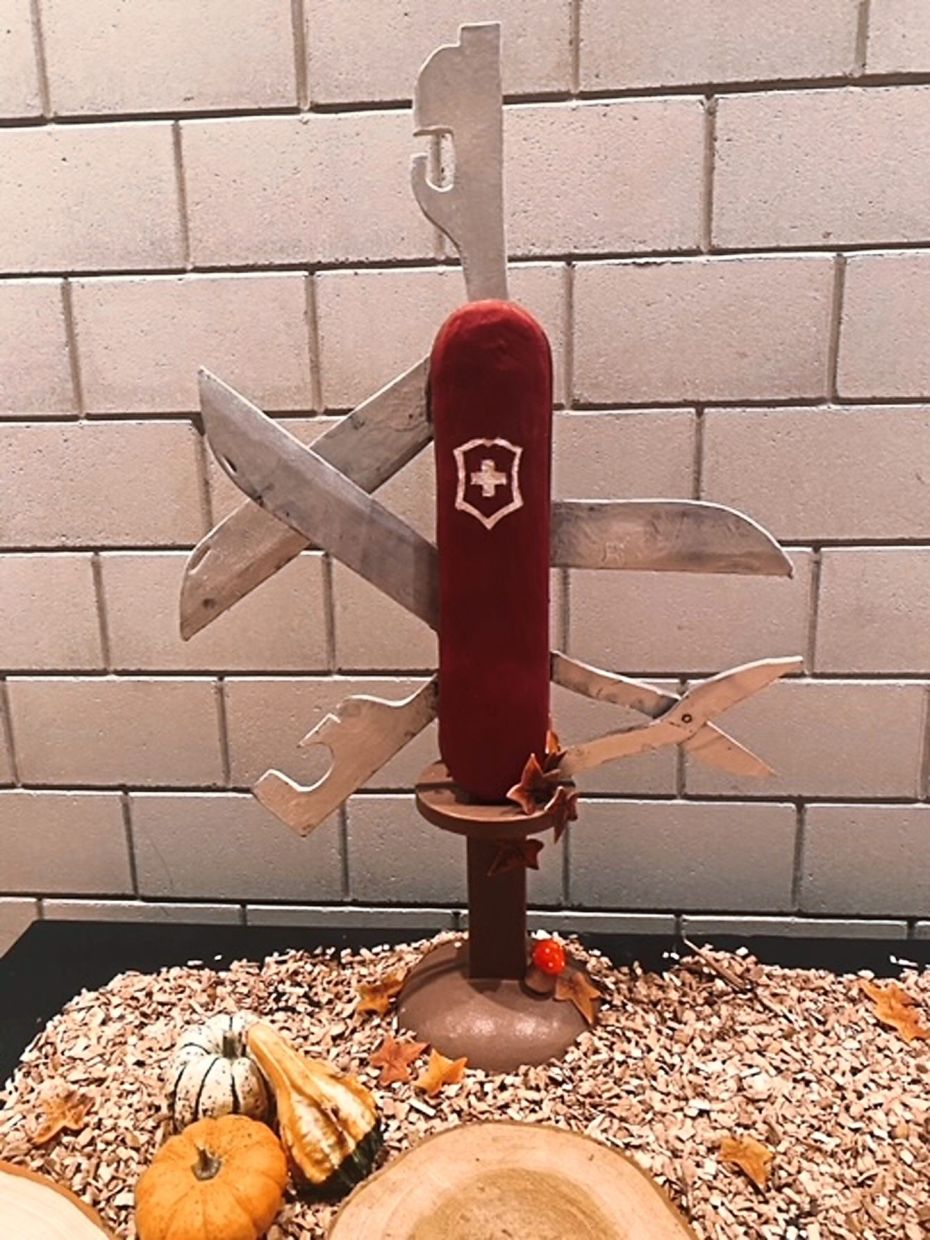 Bella won third place for this chocolate sculpture, created to the theme of 'Swiss Made', in the final competition for young confectioners from Romandie and Ticino this year.

“I was very happy and proud to be able to represent the state of Neuchatel, a state that was once an unknown city for me. But then I realised that I didn’t just represent a state in Switzerland but in my heart, I was representing Malaysia as well.

“I was a stranger in Switzerland but now I am making my way and reaching my dream,” said Bella, who is thankful to her employer, family and friends for their support and encouragement.

Being Malaysian, Bella loves to draw from her background for recipe inspirations.

“I like to infuse Malaysian and Asian flavours in my pastries, and people here love them,” shared Bella, who uses a lot of coconut milk and pandan extract in her creations.

She gets many of her ideas from the Internet as well as just thinking about new combinations.

“Sometimes I’m just curious to know if two flavours complement each other well without over-powering the taste.

“A few of my creations stem from my grandma’s recipes, for example her pineapple tart, or my late grandpa’s favourite desserts and sweets.”

Bella is most proud of her specialty – a milk chocolate gianduja, crushed caramelised peanuts and thin chocolate shortbread all covered in milk chocolate ensemble – which she created in honour of her late grandfather. 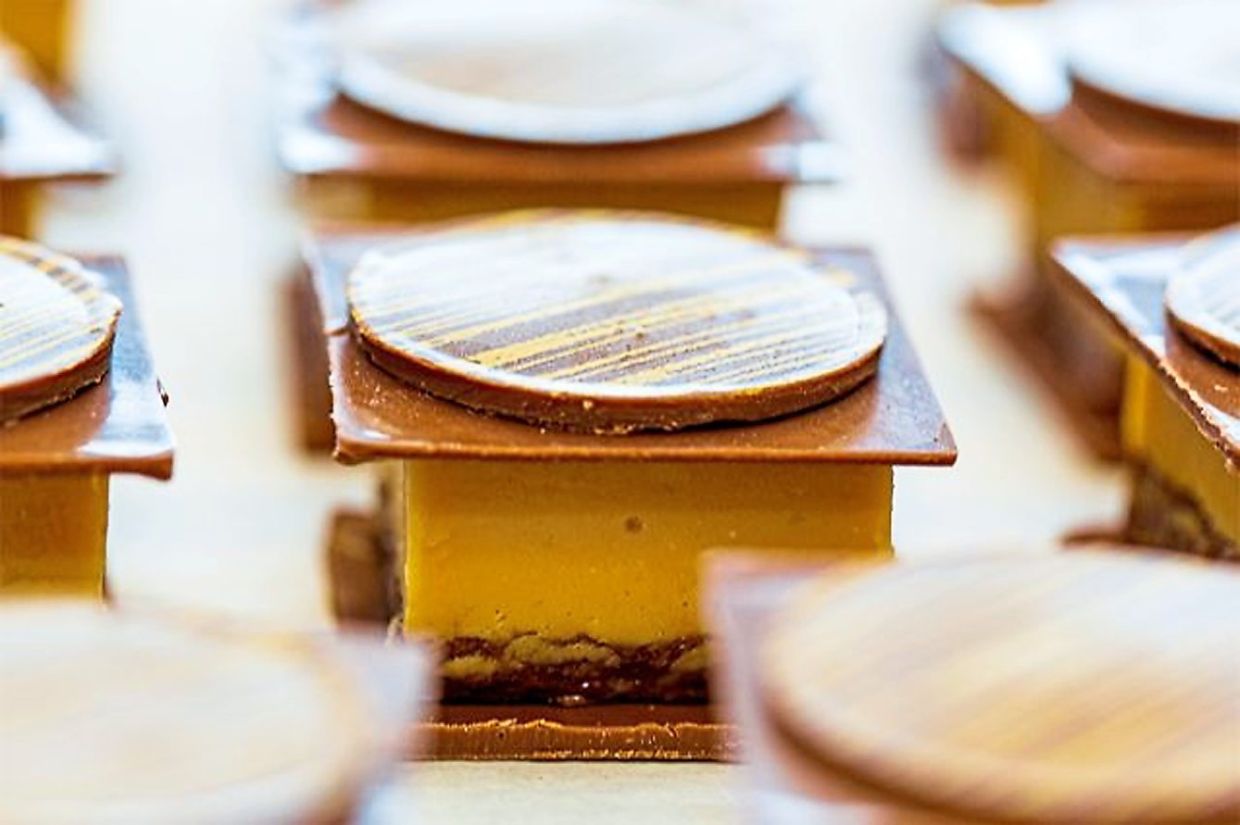 Deconstructed snickers made by Bella.

“It was my inspiration because he used to buy crushed peanuts all the time and it was his favourite.”

“It fascinates me because the creations are endless. You can experiment with almost anything – sweet, sour, bitter, spicy... all that with the right amount and it could turn into something amazing.

“I love the precision of it all and how pastries are so delicate. I love it when I experiment with something new and show it to people and they have the biggest smiles on their faces. That brings me joy.”

Since winning third place in the final competition for young confectioners, Bella has been receiving job offers from all around Switzerland.

But she has decided to accept the position of head apprentice manager at the same pastry shop in Neuchatel where she did her apprenticeship, starting work in January.

Meanwhile, she harbours hope of returning to Malaysia one day to open her own pastry and confectionery shop.

“When I do that, I will be using the best Swiss chocolates; it will be 100% Swiss chocs with Asian infusions,” shared Bella, who likes to sing and is also taking dance classes to disconnect from work after a long day.

Moscow's newly-starred chefs have put Russia on the culinary map

Ordering in: Indulge in a giant Angus short rib burger and other pulled meat burgers designed by a talented chef 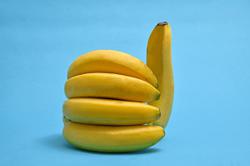 Lou and behold
Malaysian crafter sells crochet portraits to make ends meet during Covid-19
Former Malaysian ship's cook has been knitting with passion for over six decades Premium
Djokovic leaves Australia but debate goes on in vaccine saga
Shebby Singh: remembering a football pundit who lived and breathed the beautiful game
These Mongolian doctors trek to remote areas to give herders jabs
After space, Japanese billionaire Yusaku Maezawa's targets the Mariana Trench
This ice cream vendor from Soweto keeps generations smiling
Sabahan wears traditional Kadazan outfit weighing over 4kg for her graduation
These gardener-activists are sowing seeds all over cities and spreading the word on TikTok