When hotel director Calvin Lucock and restaurant owner Unn Tove Saetran said goodbye to one of the last groups of migrants staying in one of the seaside resorts they manage in Spain’s Canary Islands, the British-Norwegian couple didn’t know when they would have guests again.

They had initially lost their tourism clientele to the coronavirus pandemic, but then things had taken an unexpected turn.

A humanitarian crisis was unfolding on the archipelago where tens of thousands of African men, women and children were arriving on rudimentary boats. The Spanish government – struggling to accommodate 23,000 people who disembarked on the islands in 2020 – contracted hundreds of hotel rooms left empty due to the coronavirus travel restrictions.

The deal not only helped migrants and asylum-seekers have a place to sleep, it also allowed Lucock to keep most of his hotel staff employed. Norwegian restaurant owner Saetran speaking to migrants from Senegal, including alleged minors, who were sleeping in the streets of Las Palmas.

But the contract ended in February and thousands of people were transferred out of the hotels and into newly built large-scale migrant camps. Or so they thought.

“We realised that we had a queue of people standing outside when we closed the doors, ” said Saetran, a former teacher, in a recent interview with The Associated Press at the Holiday Club Puerto Calma hotel in southern Gran Canaria.

Some of the “boys”, as she calls them, had ended up on the streets after being expelled from government-funded reception centres. Others had chosen to leave the official system fearing overcrowded camps and forced returns to the countries they fled from. With the rooms still empty, Saetran said she couldn’t sleep knowing the migrants would be left on the street.

So they reopened the hotel doors again, this time at their own expense. With hundreds of empty rooms, Saetran (pic) and her husband Lucock, who runs the Holiday Club Puerto Calma hotel, decided to reopen their doors at their own expense to young migrants.

“They were very scared, they didn’t have anywhere to go, and there wasn’t any other solution,” said Saetran, who has lived in the Canary Islands with Lucock since the 1990s and has a Spanish-born daughter.

Today, the family, with the help of some of the hotel staff and other volunteers, provide food through Saetran’s restaurant, shelter through the hotel and care to 58 young men, including eight unaccompanied minors, mainly from Morocco and Senegal as well as other West African countries, who fell out of the official migrant reception and integration system for one reason or another.

One of them is Fode Top, a 28-year-old Senegalese fisherman who left his country in search of better work in Europe last November. The fish in Senegal, he says, have disappeared from the ocean following years of industrial fishing by Chinese and European vessels. Nowadays one can hardly make a living being a fisherman. 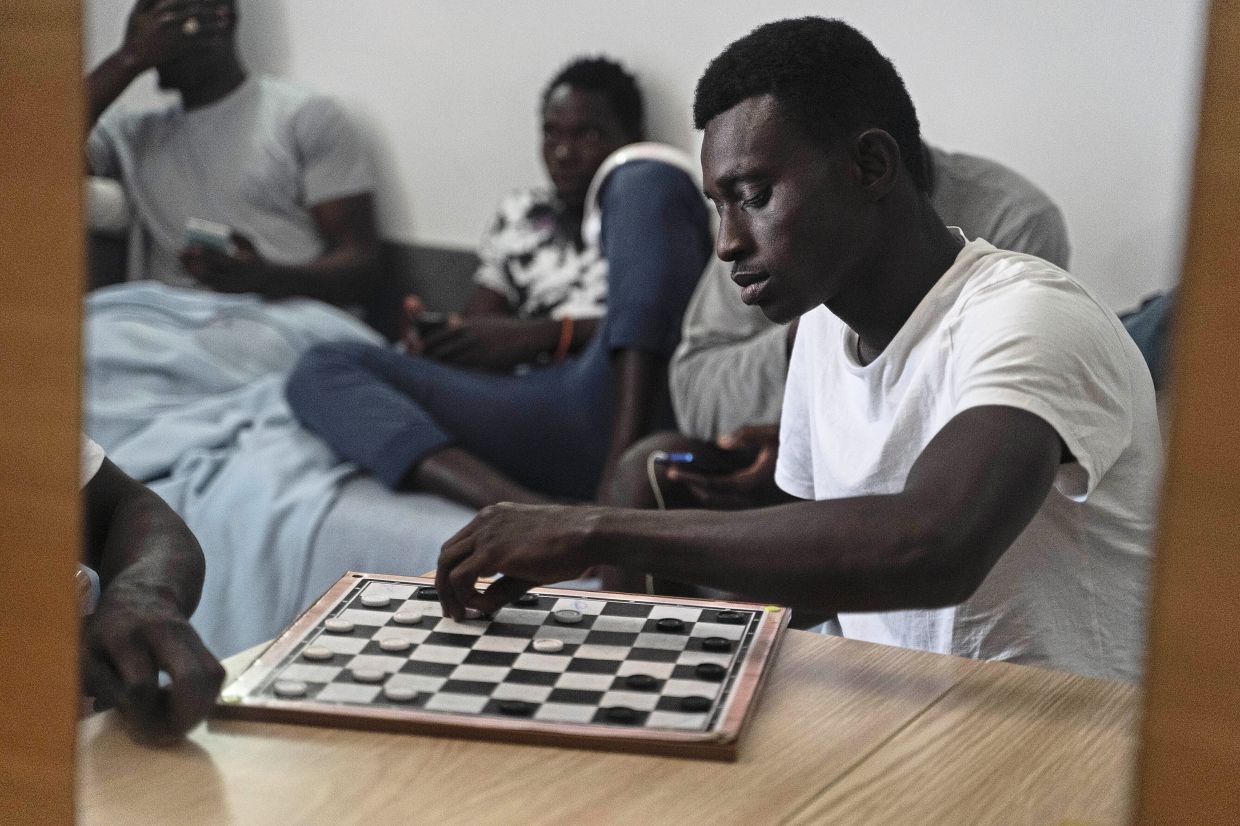 A Senegalese migrant playing checkers in his room.

“If I return to Senegal I will have problems. Many problems, ” Top said.

The official camps have also been plagued with problems, with reports of overcrowding, insufficient food, unsanitary conditions and lack of legal and medical assistance. Most recently, police intervened with rubber bullets in the largest camp on the island of Tenerife after a fight broke out between two groups of residents.

The Canary Islands and their year-round sunny beaches normally attract millions of northern European tourists each year. But for the migrants at Puerto Calma, staying in the hotel is no vacation.

The islands were just meant to be a stepping stone toward stability, security and employment in continental Europe, not their final destination. Today, it is a place of limbo for thousands who were denied access to the Spanish peninsula and live in waiting, unable to work and send money back to their families.

“They’ve come here looking for a better life, one of the reasons I came to Spain, ” said 47-year-old Lucock. There’s only one difference: “They are not born with a European passport so they can’t travel in the same way I can.” 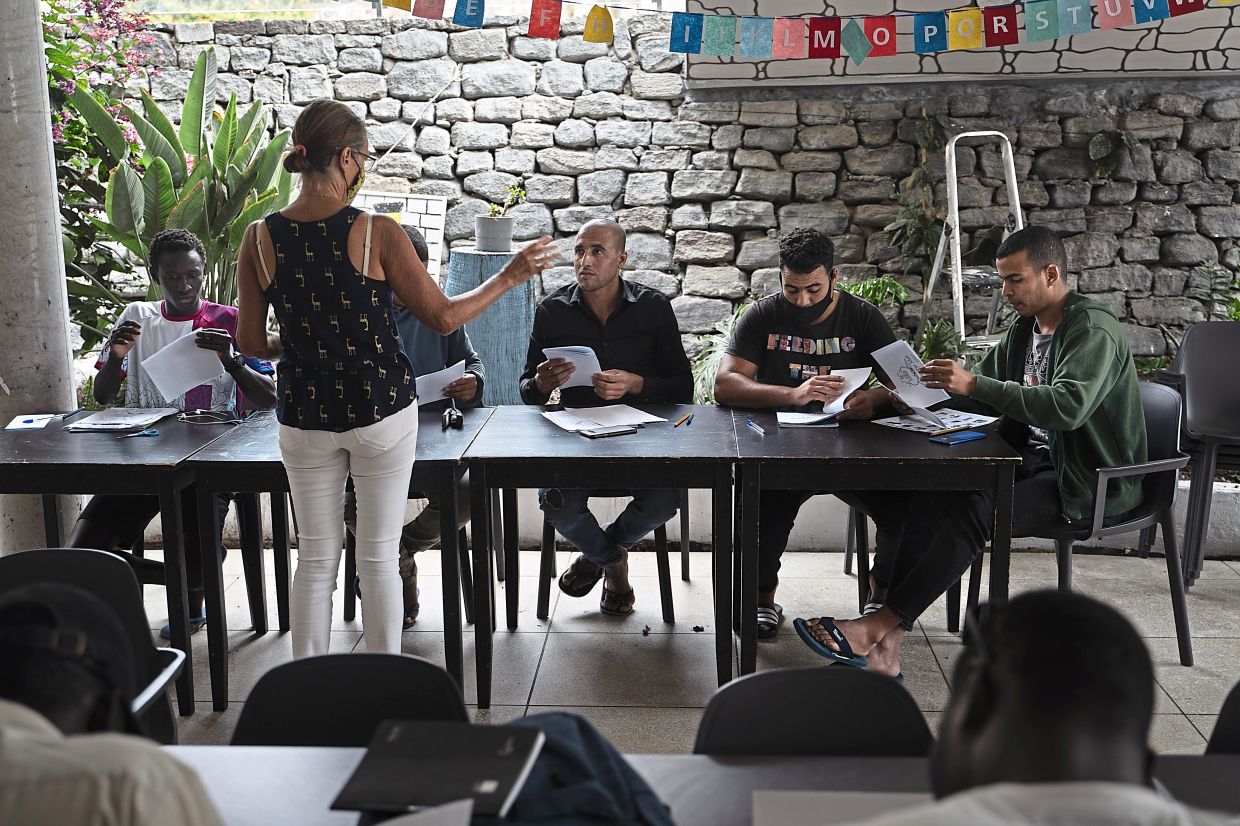 On a recent evening, as they ate dinner, Saetran got a text message: Six young men, including alleged minors, had been sleeping in the streets of Las Palmas for days. She looked at her husband, who runs the hotel, for approval. He rolled his eyes and took a deep breath.

The next day, the six boys arrived at the hotel carrying their belongings in plastic bags. Saetran and Lucock welcomed them and gave them two rooms. Both of them know the hotel won’t be able to shelter migrants forever, but for now they have a place to sleep.

“If we can play a small part in making them feel safe and secure while they are here, then I feel like we’ve achieved something, ” Lucock said.

As the men wait month after month to either move north or be returned south, Lucock and Saetran try to keep them busy. Volunteers come three times a week to give English and Spanish classes. The athletic ones play soccer on the beach or run up the mountain with locals. There’s also a lot of checkers and card games.

The couple says they hope to continue helping young migrants even after tourism kicks off again, and are setting up a charity.

“In our culture, we have so much that we forget to appreciate the small things, ” Saetran said. – AP 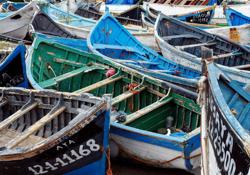 Miami women surprise homeless teen with magical quinceanera
Dallas lawyer takes up mission to help people avoid eviction
This American third-grader holds food drives to help those in need
Heart and Soul: Interpreter was the bridge between Buddhist masters and community
Senegal’s wrestlers ready for combat after year-long wait
Malaysian B40 bakers earn extra money for Hari Raya through Cookies For A Cause
70-year-old Englishwoman wages war on plastic waste on Cornwall's beaches
Sweden's only female oyster diver finds calm at sea
US town lets people pay for meals in advance for the needy
This Malaysian offers relief to the underprivileged through food bank