It all started with 10 packets of chicken rice 15 years ago.

JP Thong, then 35, and a friend decided to help feed the homeless in the Bukit Bintang area in Kuala Lumpur where his office was located.

Both Thong and his friend were members of the Kechara Buddhist Organisation (Kechara) and had been inspired by its late founder and spiritual teacher Tsem Rinpoche to help the homeless.

“Tsem Rinpoche, an American, had shared in one of his talks in Kuala Lumpur back in 2006 that he was once a homeless person in Los Angeles, and if some good Samaritans hadn’t helped him and given him a chance, he wouldn’t have gotten to where he was or achieved all that he had in life, ” reveals Thong.

Tsem Rinpoche also recommended having a soup kitchen in Malaysia as he had noticed many homeless people in the city. 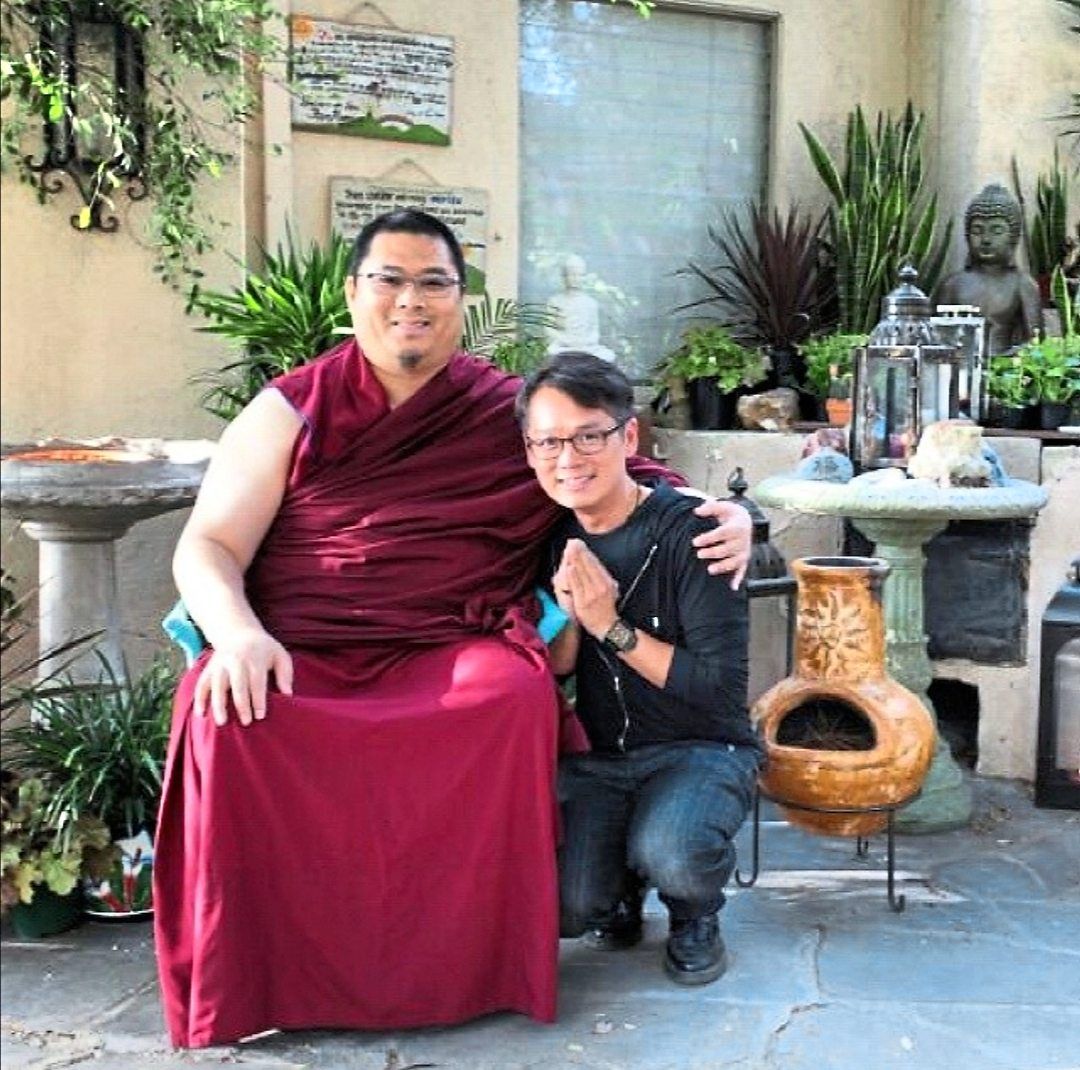 Thong (right) with the late Tsem Rinpoche, his spiritual teacher and mentor, in 2006. Photo: JP Thong

Thong was inspired, and despite not knowing how to go about it, decided to start helping the homeless “in his own backyard”.

“There are many homeless people in the area and I see them every day, sleeping on the sidewalks, ” says Thong, who used to manage his family business in the hotel and property investment industry.

From just the two of them, more people – mainly Tsem Rinpoche’s students – joined in the effort to feed the homeless.

They were the first few volunteers who ran the Kechara Soup Kitchen (KSK), which was incorporated as an NGO in Kuala Lumpur in 2008.

Impressed by Thong’s enthusiasm and initiative, the board of directors at Kechara invited him to join the organisation, and put him in charge of fundraising.

Today, the 50-year-old Thong, who is now based in Bentong, Pahang, serves as a board director at Kechara. He oversees construction and renovations (of the Kechara Forest Retreat), fundraising and the private office and home of Tsem Rinpoche.

KSK recently embarked on a food bank project in Pahang to help underpriviledged and marginalised groups, including the Orang Asli.

“There are so many poor people from all walks of life in Pahang – from the Orang Asli to those in the various kampungs, ” says Thong, who spearheads the project.

“Logistically, it’s difficult to reach them from KL. We have to hire a lorry or van to bring the foodstuff to Pahang, go to the river, take a sampan for two hours deep into the jungle, then bring the foodstuff through muddy jungle paths to their remote villages, ” he explains.

Thong is quick to add that although they may be Buddhists, the soup kitchen and food bank are non-religious entities, and they help the poor regardless of race or religion.

“As long as a person lives below the poverty line, we’ll assist them, ” says Thong.

Many of the volunteers are also of other religions, and include the royal family and directors of companies.

Breaking the chain of poverty 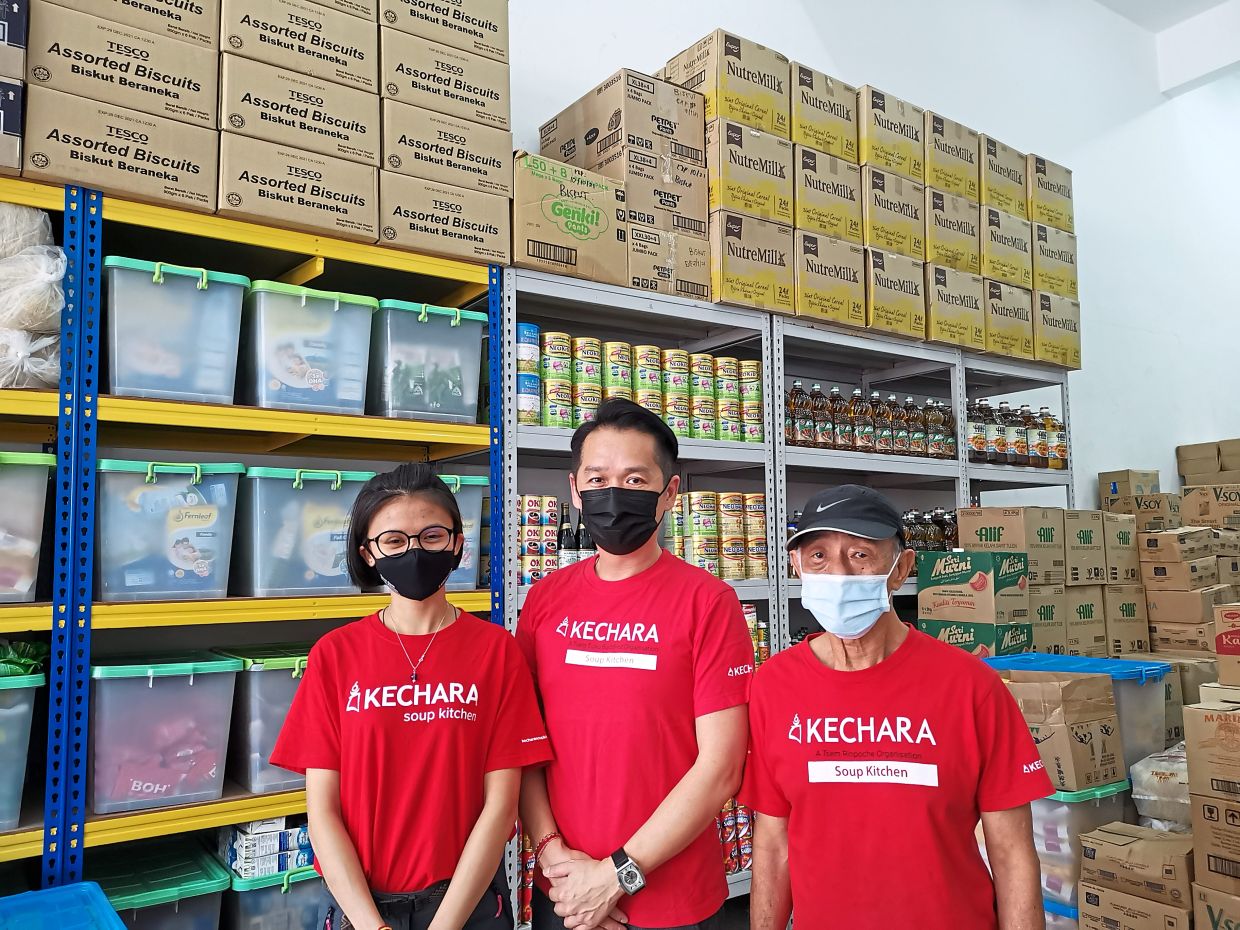 Thong says usually their staff will visit the family at their home to assess whether they’re genuinely poor, and to understand why they’re in that situation and how best to help them.

He reveals that most of the recipients do have a job and income, but it’s just not enough to survive on.

“If a breadwinner earns between RM1,000 and RM2,000 but has to feed his spouse, five children, parents and in-laws, it’s just impossible to survive, ” he says.

According to Thong, some of the breadwinners may only get to eat once every two to three days – rice and a few strands of vegetables, or bread. They drink water to feel full, and are perpetually falling ill due to malnutrition.

He says they step in to offer these families relief.

“We give them what they need to get started so that they can have meals every day, ” he says.

The group provides the families with essential food items so that they can use whatever money they’ve budgeted for food for their children’s school uniforms, textbooks and other necessities.

Thong says their goal is to help these families escape the poverty cycle.

“All the parents need to do is to focus on getting their children educated, at least to graduate with an SPM certificate, or a diploma or degree. Once they reach that level, they’ll break out of the poverty cycle, ” he says.

Where required, they also help find these families corporate sponsors to help put their children through school.

Many of the kids return after graduating to thank them, and often become volunteers with KSK too.

“Sometimes, the ‘clients’ only need help for six to nine months, and then they are able to get back on their feet, ” says Thong.

In other cases, it’s a matter of job placement for the breadwinner, such as finding them higher-paying jobs so that they can support their family.

“Some of them sleep on the streets even though they have a job as a security guard, clerk or dispatch because they’re from outstation and can’t afford to pay the two months of rental deposit. So we help them get a similar job that provides accommodation, ” explains Thong.

“A lot of NGOs struggle to make ends meet and it’s very difficult for them to get funding. We can help them. All they need to do is write in, and after assessing the situation and their cases, we’ll send them food so that they can focus on helping the needy, ” he says.

Thong urges all to go out and “adopt a charity”.

“If you can, it’s good to volunteer and do some good. And if you have extra cash, instead of spending it on another pair of shoes or something else that you don’t really need, how about donating it to charity? Thong also provides mindfulness training and meditation sessions online. Photo: Kechara Forest RetreatThong believes that besides charity in terms of action and deeds, there is also “charity of the mind”.

During the movement control order last year, Thong started providing mindfulness training and meditation sessions online, in the hope of helping people get through the pandemic. The sessions are all free of charge.

“I noticed that many people, including my friends and peers from the corporate world, were having a difficult time coping with the pandemic and MCOs, ” he says.

“So I wanted to help them get through the pandemic by understanding how the mind works, realising the difficulties they face during the lockdowns, like boredom, restlessness, irritability and depression, are due to a ‘withdrawal syndrome’ from life before the pandemic, and how they can deal with it, ” he adds.

Thong believes the sessions and workshops will help people stay grounded and focused, and have a more effective life.

“A lot of it is about focus and overcoming distractions, which is necessary in one’s personal and work life, ” he says.

He also talks about different aspects of one’s life that have contributed to who they are today.

“When we understand and accept what we’ve gone through in the past, then we realise why we are the way we are, and we can unlearn and relearn, or reprogramme ourselves to become how we actually want to be, ” he explains.