Police Day: Our men in blue as frontliners and backliners

The writer (second from right) with her PVR comrades in Kampar Police Contingent Headquarters before the Covid-19 pandemic. — Photos: CHEAH PHAIK KIN

When a state of Emergency was declared in January this year, I was reminded of the following lines written by my mentor Shamsul Amri Baharuddin in his paper aptly titled "Unity in Diversity: the Malaysian experience" (UKM Ethnic Studies Paper Series No.13, Oct 2010).

... Malaysia achieved its independence during the Emergency... it was the police force (uniformed and non-uniformed) which was the central instrument in the overall ‘security’ strategy.

This is our country’s second after the Malayan Emergency in 1948, post-World War II. Whether fighting against a virus or terrorists, the Royal Malaysia Police force, with its civilian volunteers, play an instrumental role. In fact, the Royal Malaysia Police Volunteer Reserve (PVR) (Sukarelawan Simpanan Polis Diraja Malaysia) was set up during the Malayan Emergency. Putting on the uniform to perform our duties morphs civilians like me who are in the PVR into police officers. The Police Act 1967 stipulates that when on duty, PVRs bear the same powers and authority as regular police officers in the corresponding rank.

In this present Emergency to combat the spread of Covid-19, PVRs are both frontliners and backliners. Responding to the needs of the force, we PVRs can be called to task in the frontlines with the regular officers or stand back and be on standby. We serve as reserves, back-up, and support for the force. PVRs bear the weight of responsibility to carry out our duties – whatever they may be – with integrity, professionalism and humility. At different junctures of the pandemic, the regulars have had their leave frozen, and sometimes allowed to take leave by rotation. During Ops Covid-19, the regulars are often rostered to work eight-hour shifts manning roadblocks, patrolling, and doing compliance checks and others. Roadblock duties are physically challenging to say the least because officers need to stay alert and sharp despite the long hours and harsh weather conditions. We PVRs are also rostered for eight-hour shifts. I did not think I could endure such long hours of rigorous work but I volunteered anyway as this is not the time to let such trivial, irrational concerns stifle the team’s performance. As servicemen, we need to put our best foot forward. This is, after all, a war against a virus. Despite the adversities and risks, I saw that the new challenges brought out the best in all of us. We do not realise what we are capable of until the situation calls for it. On more than one occasion, I saw the ingenuity, resourcefulness and virtuosity demonstrated by the regulars and the PVRs during Ops Covid-19. 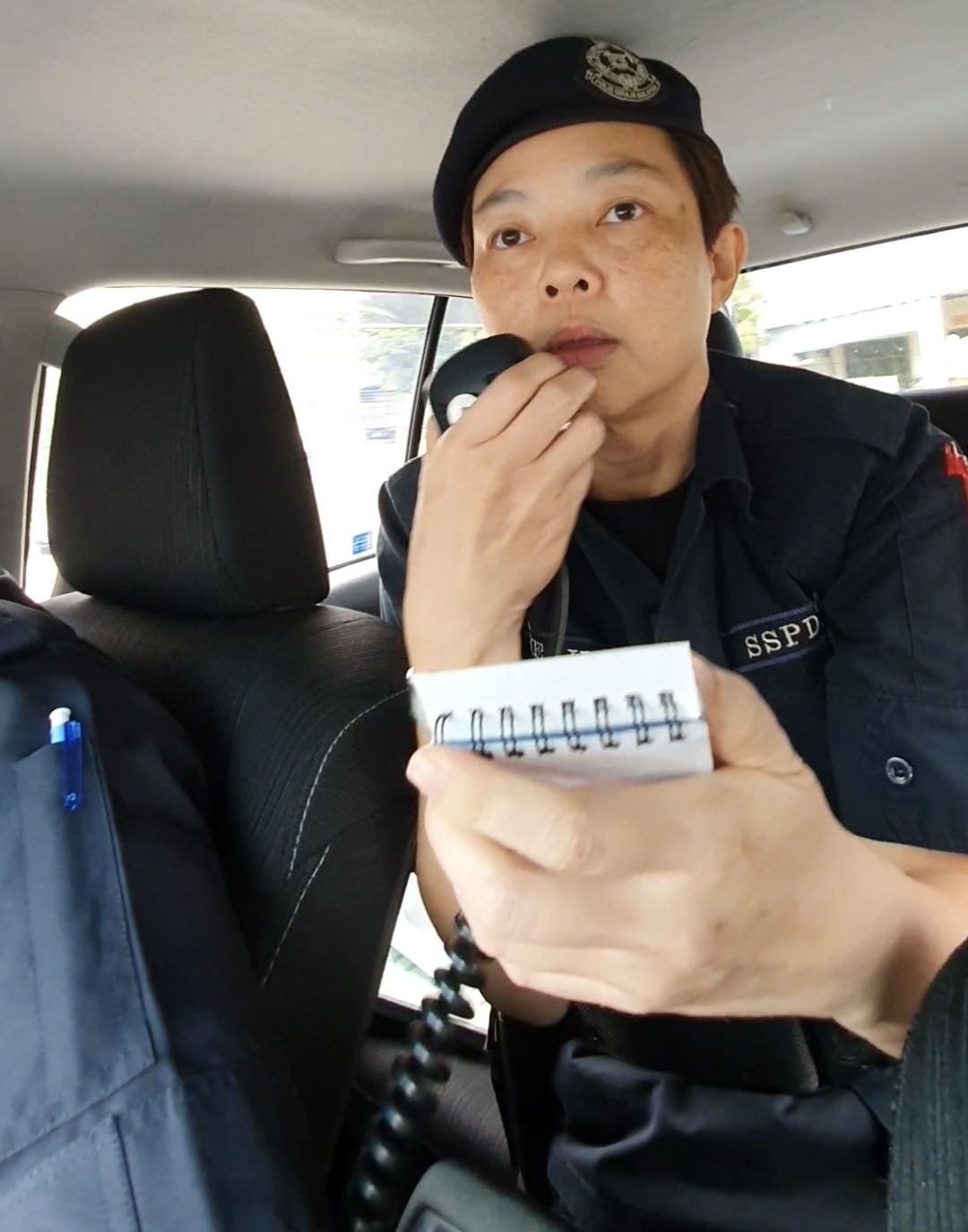 Cheah Phaik Kin making an announcement over the MPV speakers to remind people to comply with public health measures during Ops Covid-19.

I remember once I was rostered for an Ops Covid-19 patrol duty that involved checks in shops and public places for compliance of public health measures such as wearing masks, social distancing, temperature-scanning, and registering visitors. As we were about to leave the balai (station), my in-cas (officer-in-charge) told me to bring along a copy of the cross-state permit application form.

I wondered what it was for since those who needed to apply for the permit had to come to the balai in person. I did not ask further, and just did as I was told and hurried back into the MPV (mobile patrol vehicle). Then he said, “Good that you are here today, can you do the announcement in Chinese?” He told me what to say and I quickly composed a script in my notebook.

As we patrolled the market area, I excitedly made the announcement from the MPV speakers, reminding people to adhere to the Health Ministry’s SOPs.

Then we continued to patrol the area on foot to conduct compliance checks in the eateries, shops and market stalls.

When the people in the market area saw us making our rounds, many came up to us to ask for clarification on the SOPs and and travel permit application. It was almost like we were the town celebrities, getting all the attention.

My in-cas was simply brilliant – bringing a copy of the permit application form with us was such a simple thing to do, but we helped so many people that day. Many of them did not have computers or printers at home to print a copy. The elderly could not see the contents on the form as the print was too small for them to read while others needed to know if their reasons were sound enough to get a permit approved.

We were sweating buckets under the hot sun that day, making our rounds, stopping to talk to people and responding to their queries, and lending them our copy of the form to photocopy.

Then they asked me if it was my voice that they heard over the MPV speakers and said that it was good that we made the announcements. They said that such reminders were useful to help them understand what they could or could not do. That day I earned myself a new nickname; folks in the area called me leng lui mata (pretty policewoman), a flattering but functional nickname, if you ask me. It does not really matter that they called me by a name other than that on my name tag; what is important is that we do our part and stay focused to fight this war. That experience taught me that we simply must do what is needed to help ourselves and our communities adapt to the new ways of living, overcome the obstacles and make it through this challenging time. 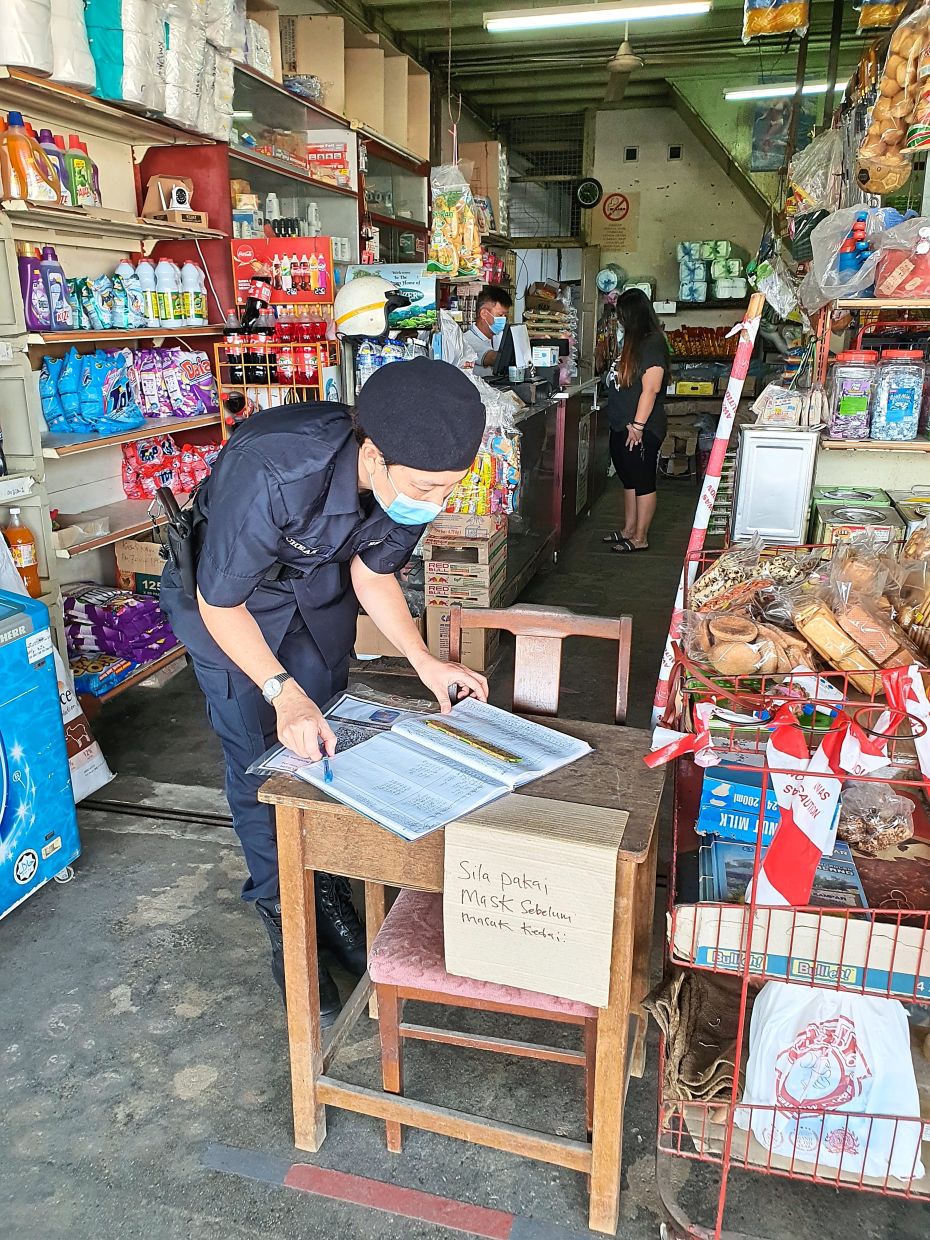 The police often receive no applause and, most of the time, it seems like a thankless job. Worse still, as law enforcers, the police need to take stern action to do what is unpopular but necessary. This involves issuing summonses, doing daily checks for compliance, rejecting ungrounded applications to cross state borders, and making arrests to protect the community and manage the risks to curb the virus.

In the line of duty during this pandemic, we bear the risk of getting infected by Covid-19. But we choose to remain at our posts and continue to serve while taking the necessary precautions. And like many Malaysians, we PVRs too may have lost our full-time jobs, or had our pay cut, on top of the other challenges that we need to battle in our personal lives during this pandemic. Despite these challenges, we still volunteer as law enforcers because we can. When we step into the balai to perform our duty to our country, we remind ourselves that it is also our duty to ourselves and our families to return home safely.

Even though we face countless risks, I would not trade this experience for anything. Being a police volunteer reserve officer has been such an eye-opening experience. It has trained me to analyse and respond to situations appropriately and quickly, and exercise good judgement. I also learnt to be more disciplined, resourceful, observant and alert. If I had not joined the police force, I would never have realised how important teamwork is – sometimes, it can even be a matter of life and death.

Today marks the 214th anniversary of the Royal Malaysia Police force. Police Day celebrations in Malaysia exude the spirit of patriotism and a deep sense of appreciation for the contributions of policemen and police volunteer reserves. Our gratitude goes to our families for their unending support, and our thoughts go to our retired and fallen comrades, and their families for the sacrifices that they have made. We may have lost some battles, but this war we will win. We did it once in 1948, and we will do it again.

Associate Professor Dr Cheah Phaik Kin is a full-time academician in Universiti Tunku Abdul Rahman (UTAR), Kampar Campus. She has served as a Constable in the Royal Malaysia Police Volunteer Reserve since 2014.