Volunteer teacher Hartina Bulating Arssid has a steady supply of sea snails and seafood. Whenever she teaches her students at Pulau Mumiang in Sandakan, Sabah, parents will make sure she goes home with their fresh catch.

Before the current conditional movement control order, every weekend Hartina would teach English to about 60 students, and their parents want her to know they appreciate her services.

Hartina doesn’t receive any payment for her classes but she doesn’t mind this unique barter trade system. For her, these items are priceless gifts that money can’t buy.

“Their parents are mostly fishermen and odd job workers. They offer me fresh produce from the sea as tuition fees, and I am always thrilled to receive them, ” says Hartina, who is fondly called Teacher Lat.

She keeps a busy schedule running a digital media company and a boutique but Hartina is committed to helping stateless children. 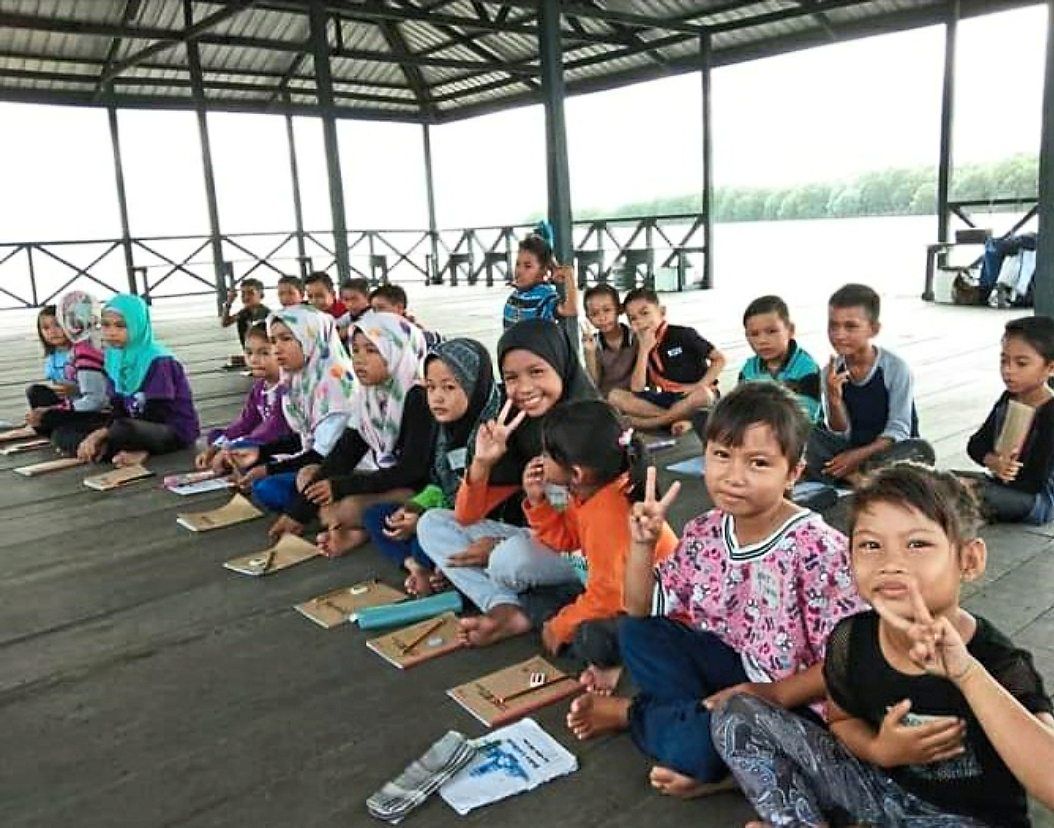 Pulau Mumiang's stateless kids are happy to learn while sitting on the jetty without comfortable chairs or a fan. Their classes are currently halted due to the conditional MCO.

“I was born and raised in Sandakan and I have always been saddened by the plight of these children. Even while I was working in West Malaysia, I used to think about how I could help, ” shares Hartina, who decided she’d translate her concerns into action when she returned to Sandakan in 2017.

Since then, Hartina has been teaching English to stateless children on the island, which is a 30-minute boat ride from Sandakan. Her students, whom she fondly calls anak (children), are between six and 13 years old.

Lessons are conducted on Pulau Mumiang’s jetty. The students sit on the floor as there aren’t any desks, chairs or blackboard in her special classroom, cooled by the fresh sea breeze. No one complains as all are happy to get their wish to go to ‘school’.

“In addition to their local dialect and Bahasa Melayu, it would be better if they can converse, read and write English. I teach them simple conversational sentences. It will boost their self-esteem and give them the confidence to brave the world. 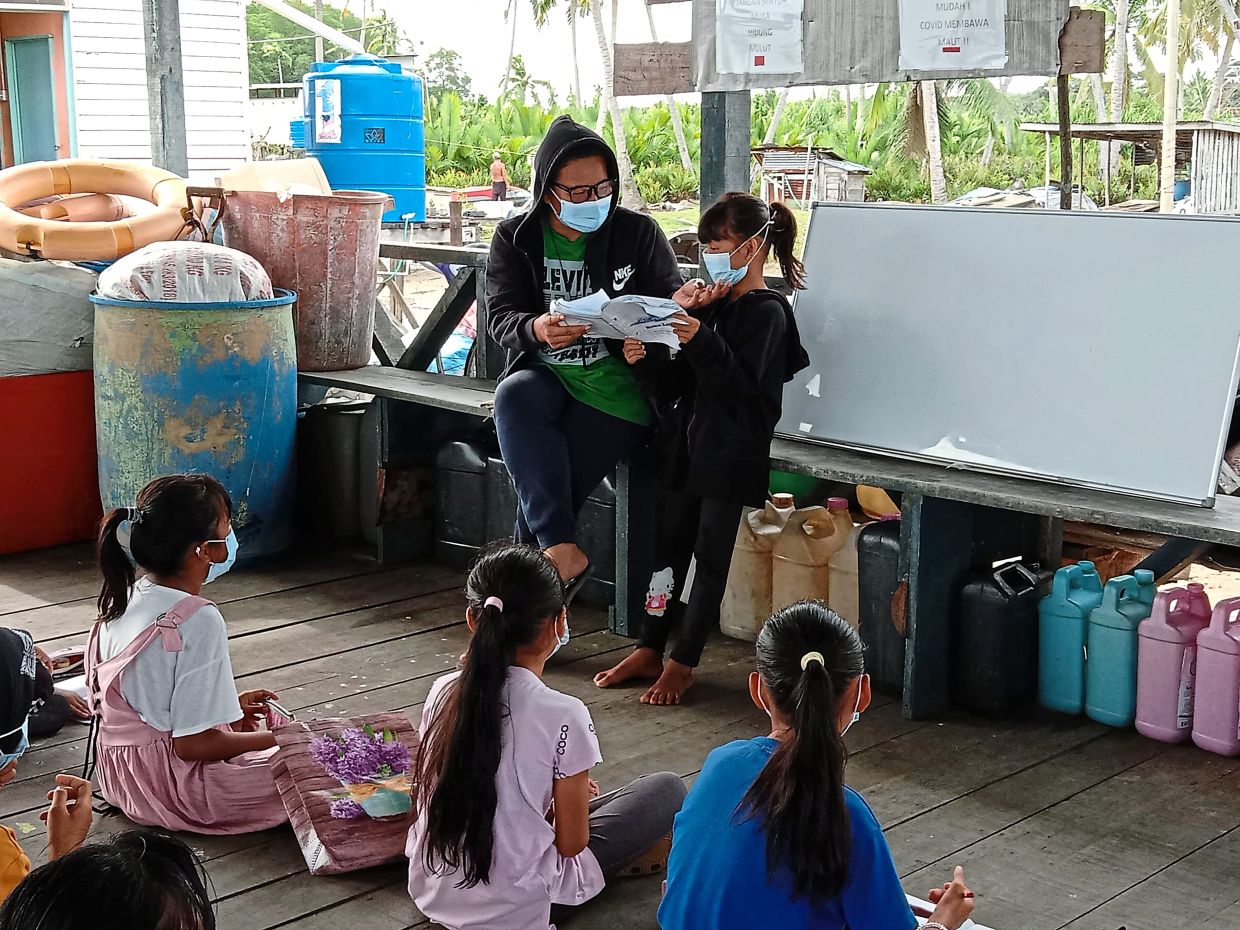 There aren't any chairs or proper white board in Hartina's open concept classroom, but these stateless children in Pulau Mumiang don't complain.

“Sabah is a popular tourist destination. If they have a better grasp of English, they can earn an income as a tour guide or tour operator, ” says Hartina, who has been calling her students regularly as classes are currently on hold.

“I call them to find out if they are studying. I miss them dearly. I hope the conditional MCO will be lifted soon so that I can see them again, ” she adds.

Stateless people are individuals who aren’t considered nationals by any state under the operation of its law. In simple terms, it means a stateless person does not have a nationality of any country.

A 2019 Unicef report entitled Children Out Of School: Malaysia, The Sabah Context states that as of Oct 2017, Sabah had the highest undocumented children or young adults (23,154) compared to other states. These children are mostly offspring of Filipino and Indonesian migrants. They have no citizenship although many of them have documents stating their birth in Sabah.

The future of stateless children looks dim because they don’t have proper documentation. And without adequate education, many of them will end up as fishermen, rubbish collectors or odd job workers. 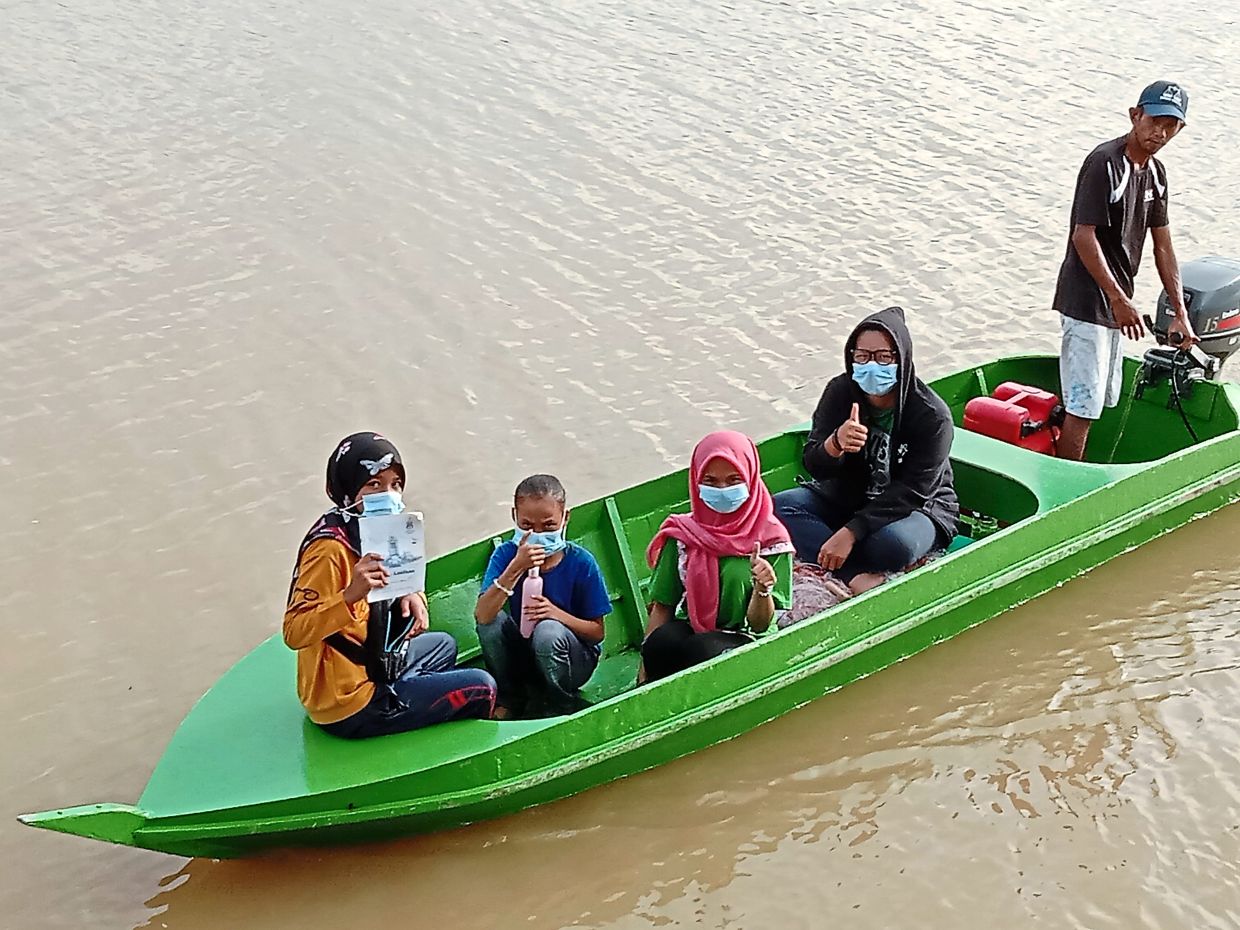 Hartina (second from right) needs to travel 30 minutes by boat to teach the kids on Pulau Mumiang.

But Hartina wants to make a change. By equipping them with rudimentary skills of reading, writing and math, Hartina hopes they can have a brighter future.

She also teaches them life skills like creative thinking and self-awareness through activities like recycling, gardening and taking care of personal hygiene.

“I don’t have a fixed syllabus for my children. I try to take them beyond the classroom and engage in activities like games, fishing and farming. I also use English to instil positive values like respect, teamwork and discipline.

“My anak-anak love it when I strum the ukulele to songs like Somewhere Over the Rainbow, You Are My Sunshine and Que Sera Sera, ” says Hartina, who spends about three hours every week with the children. 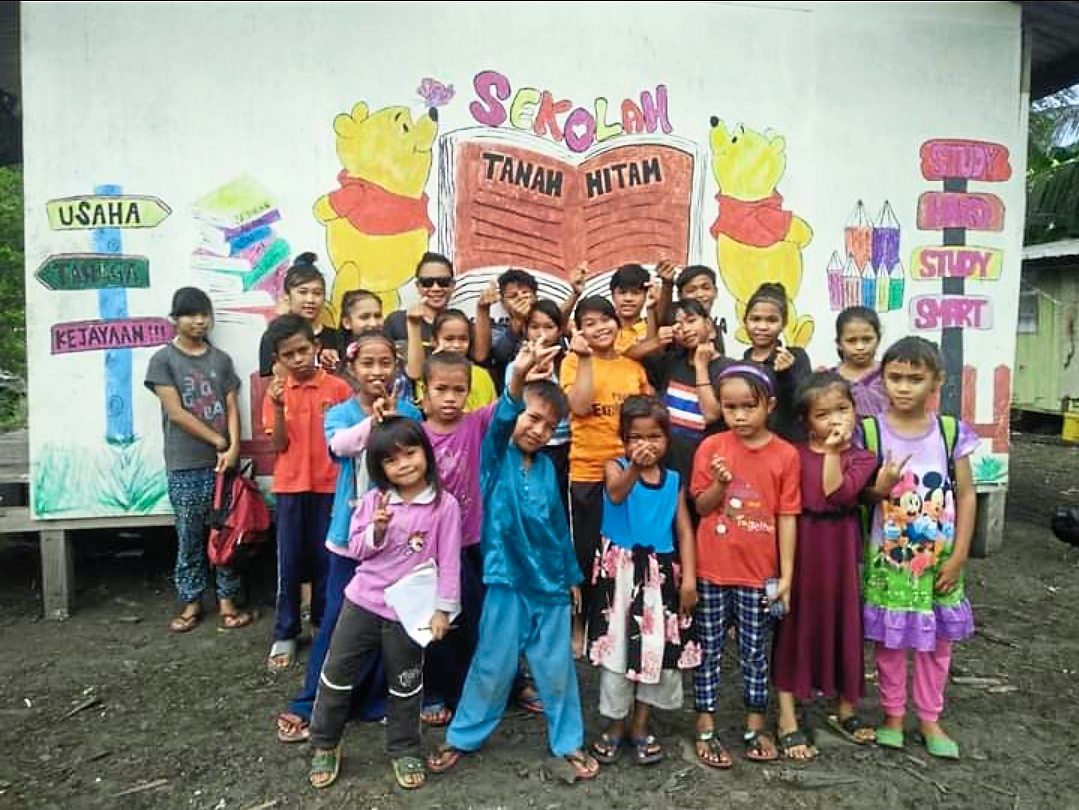 Prior to the conditional MCO, Hartina also held regular classes at Sekolah Tanah Hitam in Sandakan.

Every fortnight, she alternates between Beluran and Semporna to teach more stateless children. In total, Hartina has over 150 students under her wing.

Beluran and Semporna are 100km and 500km from Sandakan respectively.

“I’m willing to travel far distances for the children. I don’t mind using extra money for my travelling expenses. That’s part of my contribution to the marginalised community,” says Hartina, who also reaches out to the poor by providing food and medical aid to the homeless in Sandakan. Hartina says she is blessed to have the privilege to serve the children.

Often, her close friends and ad hoc volunteers accompany her on these teaching missions.

“These children have ambitions to be a pilot, doctor or teacher. I put on a brave front in front of them, but the narration of their hopes pierces my heart because I know that without basic education, their dreams will always remain as dreams. Sometimes, I cry knowing their future looks so bleak.”

Each month, Hartina forks out about RM500 to buy books and stationery for her special students. She is grateful for donations received from friends and family.

“I can’t do much but I can help them improve their lives and shape them into well-rounded individuals. I pray my children will gain big from my little contribution, ” says Hartina, whose role model is Calcutta’s revered Saint Theresa, who devoted her life to caring for the poor and sick.

Between her business and volunteer work, she keeps a busy schedule.

“It involves a lot of careful planning. While it is hectic, I do it to help those in need. I give the students a monthly time-table and homework so they can study independently during my absence.”

Although Hartina’s efforts are well-meaning, she has received a fair share of brickbats from the community. Some people criticise her actions, saying stateless children must be resigned to doing hard labour or taking on menial jobs, just like their parents.

“We need to change people’s mindsets because stateless kids are innocent. It saddens me to think of my children out there in the rough seas helping their parents fish when they should be learning.”

Despite her struggles, Hartina is steadfast in her mission.

“I love what I do. It is heartwarming to see a kid born into hopelessness begin to hope, or to see their eyes light up and their smiles when they pick up a new word. I thank God for being blessed with this privilege to serve these children.”

A helping hand from volunteer medics

Lou and behold
Malaysian crafter sells crochet portraits to make ends meet during Covid-19
Former Malaysian ship's cook has been knitting with passion for over six decades Premium
Djokovic leaves Australia but debate goes on in vaccine saga
Shebby Singh: remembering a football pundit who lived and breathed the beautiful game
These Mongolian doctors trek to remote areas to give herders jabs
After space, Japanese billionaire Yusaku Maezawa's targets the Mariana Trench
This ice cream vendor from Soweto keeps generations smiling
Sabahan wears traditional Kadazan outfit weighing over 4kg for her graduation
These gardener-activists are sowing seeds all over cities and spreading the word on TikTok