After a decorated gymnastics career, Bynum is now a budding star in the Hollywood stunt world, currently working as the stunt double for Regina King in HBO’s 'Watchmen'. Photo: TNS

The fog clears, the music intensifies and Sadiqua Bynum gets to work. Wearing a black, hooded trench coat, she fires a single shot from a gun in her right hand before leaping onto the bed of a pickup truck, where an armed masked man awaits. When he tries to escape, she chases him into a bunkhouse, her gun drawn.

This is Bynum’s superhero moment, even though you can’t see her face as she cartwheels through the air and throws her nemesis to the ground. The gun is fake and the villain is an actor, but the action is real.

After a decorated gymnastics career at University of California Los Angeles (UCLA), Bynum, a three-time All-American, has jumped into the Hollywood stunt world and works as a double for Regina King in HBO’s Watchmen. The 26-year-old is one of the youngest and most successful black stuntwomen in an industry that is just beginning to experience the trickle-down effect of efforts to increase diversity in all of Hollywood.

Being a stuntwoman, she says, is the perfect job. “I’m constantly thinking that I have the ability... to bring a different element to film and bring the skills that I have and make them bigger.”

In Watchmen, King portrays Angela Abar, a Tulsa, Oklahoma cop whose alter ego is Sister Night, a masked vigilante. She makes a show of retiring from police work to open a bakery but remains active on the force and in her secret identity.

Although the TV show, which aired its season finale on Dec 15, is inspired by Alan Moore and Dave Gibbons’ 1986-87 comic book series, the Sister Night character was created specifically for the HBO series. Bynum’s cartwheels and kicks help Angela Abar transcend her civilian persona: a mother of three trying to open a bakery.

Bynum, who graduated in 2016, has a stunt resume that includes appearances in American Horror Story, and the movies Black Panther and Rampage. But Watchmen has been a game changer.

After Watchmen wrapped, she landed a small role in Richard Jewell, the Clint Eastwood-directed drama, released Dec 13, about the security guard accused of setting off a bomb at the 1996 Olympics. In the film, which was shot in Atlanta’s Centennial Olympic Park, where the original bombing took place, Bynum portrays one of the people standing closest to the explosive device.

Thom Williams, who worked on both projects, knew he wanted to work with her again after seeing her work in Watchmen.

One of two stunt coordinators on the Watchmen pilot, Williams “discovered” Bynum when he came across a short highlight reel of her performing parkour-type stunts. He was dazzled by her ability to leapfrog over mats and transition smoothly into seemingly effortless flips. She combined power with grace and had an athletic build that would match King’s.

“A lot of times when you’re watching women’s gymnastics, it’s so beautiful and graceful, and Sadiqua had that, ” said Williams, who worked with veteran stunt coordinator Doug Coleman on the pilot. “But she also had this insane power behind it.”

At UCLA, Bynum started as a walk-on. As a fifth-year senior, she ranked in the top eight nationally in floor exercise at the end of the regular season, earning her first-team All-American honours.

Her winning routine began with a double backflip with her body straight before landing on the mat with a glowing smile. Though gymnasts typically tumble from corner to corner, later in the routine Bynum executed a double tuck pass (two backflips with her knees to her chest) down the side of the mat, a much shorter distance. She generated the necessary power from just a single step.

That same power is evident in each episode of Watchmen. Justin Riemer, the stunt coordinator who took over after the pilot, points to the way Bynum runs on the set – as if she’s starting a tumbling pass or bounding down the vault runway. Bynum is the stunt double for Regina King's Sister Night character in Watchmen.

As Bynum was preparing for graduation in 2016, she was looking into different jobs in fields such as sales or networking. She’d majored in sociology and at one point thought she might become a social worker – but eventually she decided she couldn’t stand sitting behind a desk all day. Former UCLA assistant gymnastics coach Randy Lane suggested that she might think about stunts, a path pursued by many other former Bruins (UCLA athletic team members).

Heidi Moneymaker, who graduated in 1999 and has more than 80 stunt credits to her name, doubled for Scarlett Johansson as Black Widow in the Marvel movies. Vanessa Zamarripa, a 19-time All-American at UCLA, worked on Terminator: Dark Fate. Natalie Padilla, a 2008 UCLA graduate who worked on Wonder Woman and Justice League, broke into stunts by performing on the ABC Family gymnastics show Make It or Break It, and gave Bynum advice on how to get started.

When Williams came across Bynum’s highlight reel, he called Padilla for background information – and she gave her fellow UCLA gymnastics alumna a rave review.

Bynum impressed the stunt coordinators on the set of Watchmen with her ability to pick up choreography quickly. During her first major fight scene of the series, Bynum cartwheels over her target’s arm, lands on her feet, and then throws a man – who must be 100 pounds (45kg) heavier than she is – onto the ground as she rolls to her back. After watching different videos for reference, Bynum had the sequence down in five minutes.

“Sadiqua is a peerless athlete, No. 1, ” said Macomber, the fight coordinator. She “can move and she picks up on things so well and so fast. She’s relatively new to the stunt industry but her ability to mimic is really, really fantastic”.

Starting out, Bynum’s biggest challenge may have been overcoming a gymnast’s need for precision. After 20 years of having perfectly straight legs in gymnastics, she needed to learn how to perform “dirty” – no one points their toes as they’re thrown across a living room or capturing bad guys.

Bynum’s face lights up when she talks about her work. She played her own character in Black Panther, running through the fields of Wakanda as Dora Milaje, one of the fictional country’s female warriors. But she calls Watchmen more meaningful because she was “part of something that was building a character”.

Even if Sister Night doesn’t have superhuman powers, Bynum said, she cherishes the opportunity to portray a strong female character who fights. She’s noticed an increase in the number of films featuring women of colour such as Harriet and Queen And Slim and hopes there will be even more roles for her. Those who have worked with her are sure of it.

“She’s going to be a rock star, ” Macomber said. “I have no doubt. (She’s) going to be so in demand, she’s never going to stop working.” – Los Angeles Times/Tribune News Service

'Picard never left me': Patrick Stewart on returning to his most iconic role 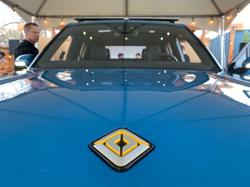