As the wedding photographer snapped away, Sherri and Bill Adams leaned over their wheelchairs for a kiss. One felt good, so they enjoyed another. And another.

Sherri beamed. How long had she waited for this? Five years had passed since she and Bill became engaged. Nearly nine since they’d met. And decades had gone by since she first wondered whether a girl like her could even dream of love.

Sherri intended to savour every moment – every hug, kiss and picture pose.

“Hey!” she shouted back to her heckler. “We’re married.”

The Scioto County, Ohio couple, both of whom have severe developmental disabilities, finally found a way to wed and combine households without losing a big chunk of the disability benefits they rely on.

But the so-called marriage penalty remains an obstacle for many couples in the United States. The new Mr and Mrs Adams, who took their fight to marry public with an online petition drive in 2016, vow to keep pushing for what they and others see as a matter of civil rights.

“Although we found a loophole in our situation, we will not give up,” Bill said. “There are a lot of couples who are still unable to get married, and that is still not right.”

The disability community’s long-running battle for change gained support last year with bipartisan legislation introduced in Congress to protect the federal benefits of people with intellectual or developmental disabilities who wish to marry. The newlyweds meeting their community as Mr and Mrs Adams after exchanging their vows.

If enacted, the Marriage Access for People With Special Abilities Act would keep Supplemental Security Income benefits for an individual from being affected by marital status, and ensure access to Medicaid benefits as long as the person qualifies for SSI. The way the process works now, SSI benefits are reduced when people marry and jointly report income.

Bill said that’s like snatching the American Dream from people who can’t help but depend in part, or fully, on disability benefits.

“This is important to us, and to America, frankly,” said Ashley Helsing of the National Down Syndrome Society. “Getting the word out about these stories is crucial to getting this legislation to move. There shouldn’t be people treated differently when it comes to marriage.” 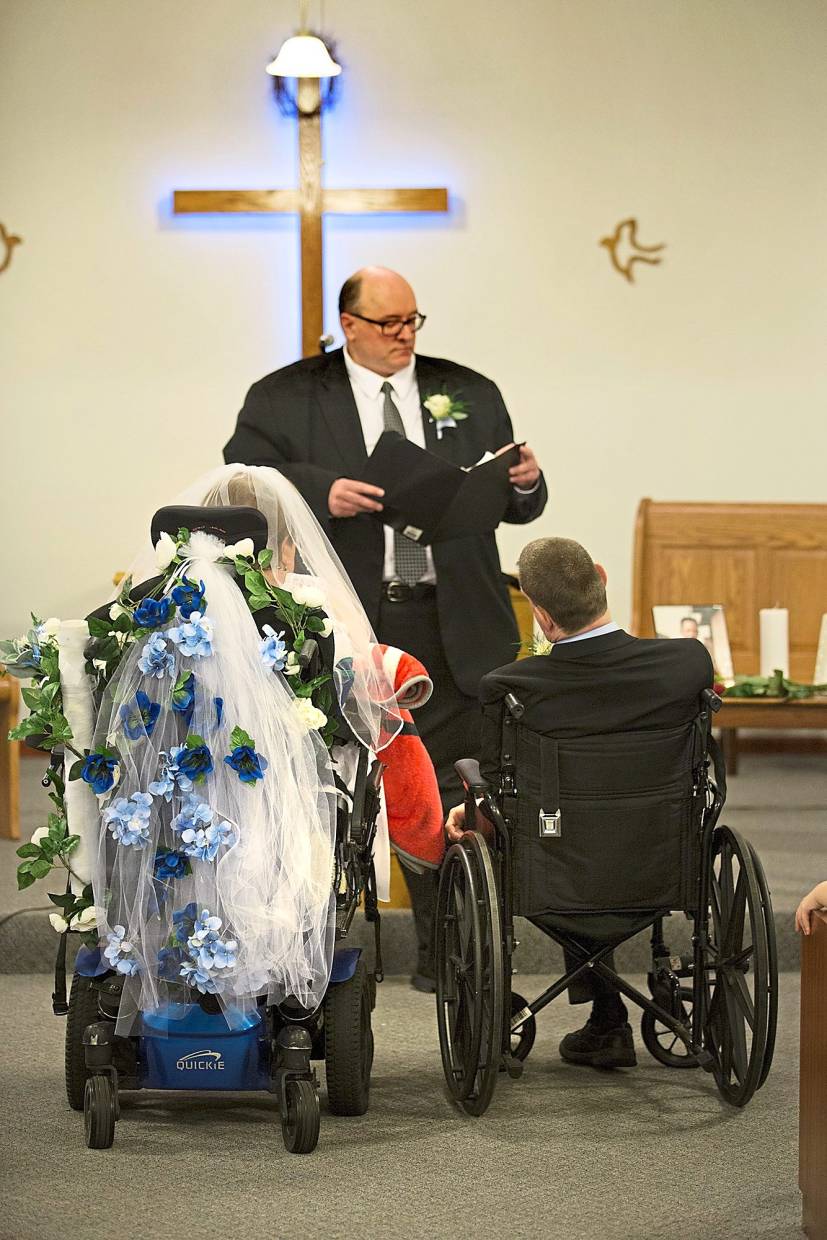 After a years-long fight for their right to marry without losing any of their disability income, Bill and Sherri finally wed recently.erri went to the Social Security office last year for a new card, she and Bill discovered that they could avoid a devastating reduction in their modest benefits (together they receive less than US$2,000 (RM8,138) a month) if Sherri received a portion of her disability income as a survivor benefit based on her deceased father’s Social Security.

Not many couples have that option or even know it exists.

Licking County residents Jordan Boring, 36, and Sarah Burkett, 34, had a lovely wedding in December 2018, but the ceremony didn’t culminate in a legal union.

“It’s not fair,” said Margie Goodin, a former site coordinator at the disabilities-services programme where the two met. “All they want is to be able to spend every day together.”

Jordan and Sarah, both of whom have Down syndrome, opted for a commitment ceremony to preserve crucial benefits. They also have not been able to get a place together because combining households could jeopardise their benefits, said Sarah’s mother, Patti Burkett.

Sarah said she’s never as happy as when she’s with Jordan. Guests cried and cheered and held sparklers aloft as the two exited United Church of Granville after the ceremony.

“What I love about Jordan is that he’s crazy about me,” Sarah said. “And he’s funny. He’s sweet.”

Jordan grinned. “I like the way you talk,” he said.

Clintonville resident Janelle Harrigill gets emotional when she discusses the married life her daughter, Michelle Harrigill, 37, envisions with her fiance, Ethan Boerner, 28.

“She’s been planning a wedding ever since she was a little girl,” Janelle said of her daughter. “And now that she’s got that ring on her finger? She’s showing everyone.”

Still, they fear the effect that marriage would have on much-needed benefits for Michelle and Ethan, who have Down syndrome.

“Everyone wants to do something to help make their dreams come true,” Janelle said. “It’s a shame when these individuals have limitations put on them.” 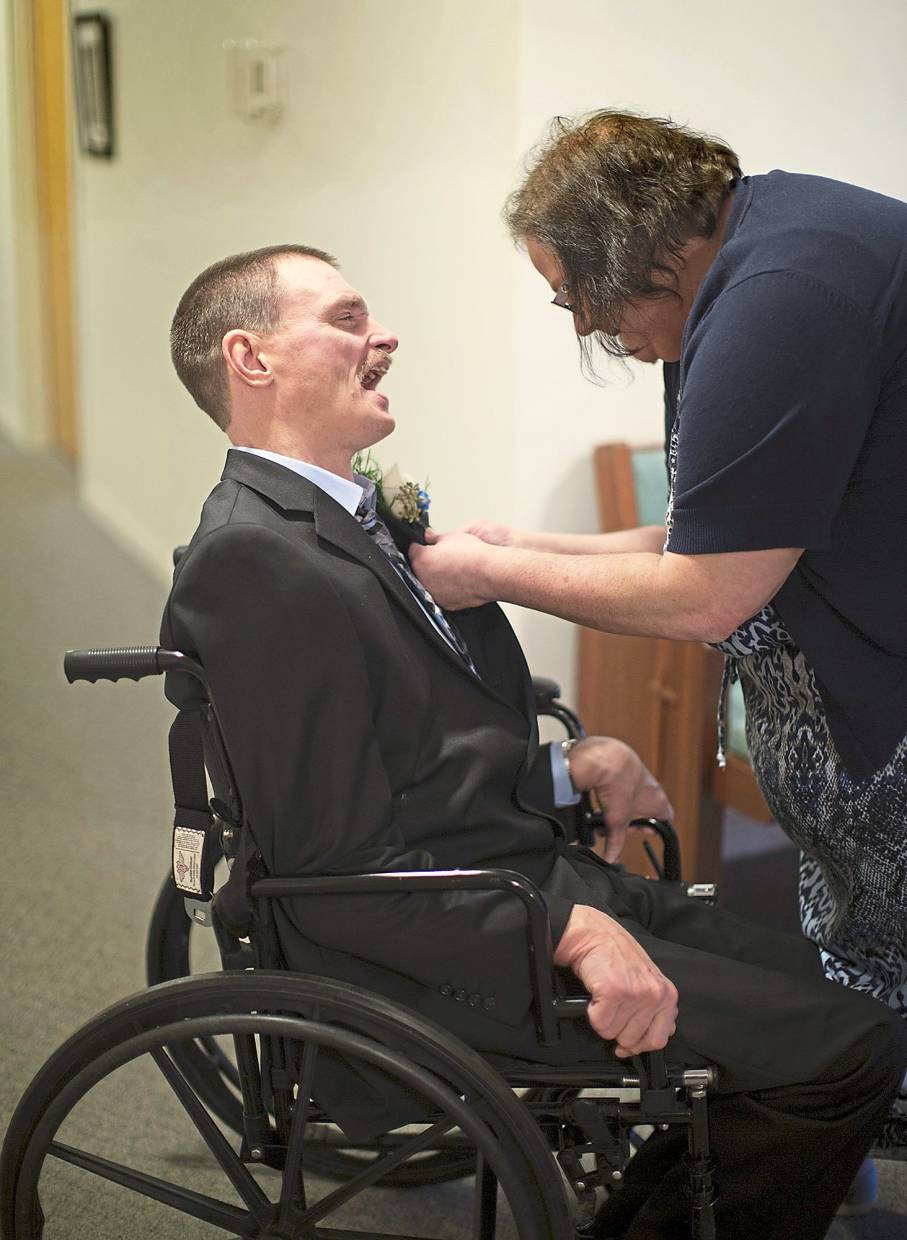 Bill has his corsage pinned on by his soon to be sister-in-law, Shelli Townsend, on his wedding day.

Bill Adams’ cerebral palsy affects his movement, and his speech can be difficult to follow.

But no one in Christ Restoration Branch church recently had any trouble understanding his tearful joy as he and his bride were joined in marriage.

Even Pastor Tony Chaffin, who has presided over plenty of weddings, felt himself getting misty-eyed.

“That was a special one,” Chaffin said after he pronounced them husband and wife. “Bill has such a good heart. And Sherri has captured it.”

Sherri and Bill now are able to share a one-bedroom home in Portsmouth near the Ohio River. Bernita Corp, a local disability- services company, built the house with them in mind and provides the support workers Sherri and Bill need.

“I’m so happy that they are happy,” said Debby Wilson, CEO of family-owned Bernita. She said Bill and Sherri are among the “very few” married couples with developmental disabilities in the area.

Sherri has spinal stenosis and achondroplasia, a form of short-limbed dwarfism, and has faced a variety of other health challenges throughout her life.

Her mother, Judy Daniel, said her older daughter always has been plucky.

“She’s taken all the bumps, got right up, and went at it again,” Daniel said.

So she wasn’t surprised when Sherri refused to take no for an answer the first time she and Bill tried to get married.

“At every turn, they’d find out they couldn’t make it work,” Daniel said.

John Katko, a New York Republican and a sponsor of the Marriage Access for People With Special Abilities Act, said people with developmental or intellectual disabilities should not have to choose between marriage and their benefits.

“This bipartisan legislation protects the rights of individuals with disabilities and enables couples to pursue happiness without obstruction,” he said.

Sherri and Bill would have been thrilled if a new law had paved the way for them. Instead, they’ll lend their voices in support in hopes it soon helps others.

Their new home is decorated with lots of personal touches, including a plaque that says it all: This is our happily ever after. – The Columbus Dispatch/Tribune News Service