Fit seniors prove that age is no barrier to chasing fitness

70-year-old Wong believes that older adults must not think that they cannot do strength and conditioning training. RAJA FAISAL HISHAN/The Star

Julie Wong is 70 years old and she lifts weights three times a week. The grandmother of three can squat 45kg comfortably. She can go heavier with just a little more effort.

Wong may be the oldest in her strength and conditioning classes at Revelation Republic, a gym in Petaling Jaya, but she is often the benchmark not because of her age but the grit and determination she displays in completing the WODs (Workouts Of the Day).

“When we post videos of our workouts on social media, many youngsters are inspired by Aunty Julie, ” says Letch Sina, one of the coaches at Revelation Republic.

For Wong, age isn’t a reason to slow down. In fact, to stay healthy and remain independent, she extols the benefits of weight training simply because it has worked for her.

“I have much more energy now and, because of all the core work I do, my balance is better too. I don’t trip as much and when I do, I am able to brace and keep myself from falling.

“It has also helped with my daily chores. I used to need a trolley to carry my groceries but now I can carry the load, even if it is heavy.

“I am also in better shape... I don’t have love handles around my waist and I don’t have chicken wings or flabby underarms, ” says Wong, lifting her toned, taut arms as proof. 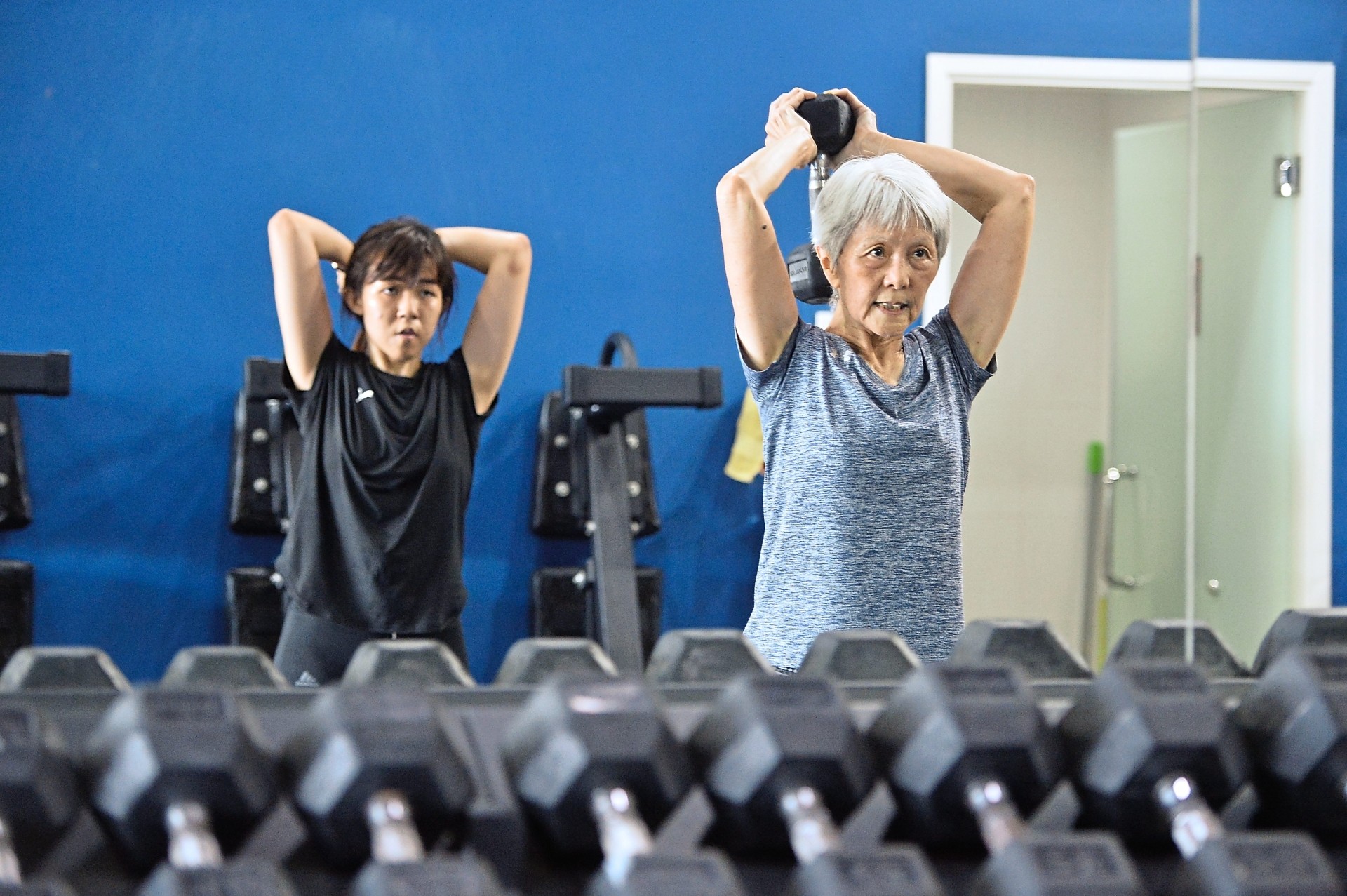 Wong believes strength training and conditioning workouts are not out of reach for seniors.

But Wong hasn’t always been into weights or exercise. In fact, she exercised for the first time just 10 years ago!

“I have never liked exercise. Just the thought of exercise was torture for me. The first time I ever exercised was when I turned 60. I remember walking up Bukit Kiara and was just a third of the way up before I resolved to never do it again. But, I somehow managed to complete the whole loop. I noticed many others who were older than me and that made me persevere. Still, it wasn’t really a regular activity that I did, ” she shares.

As luck would have it, all three of her sons are fitness enthusiasts. While on a summer break from his studies in the United States, her youngest son, Jonathan, got on her case about exercising regularly.

“He saw how sedentary my lifestyle was and drew up a six-day workout plan for me to follow weekly. I joined the gym and have been exercising regularly for the last six years, ” she shares.

Wong confesses that she still doesn’t look forward to working out but she keeps at it because she sees the positive impact it has had on her life.

For many seniors though, CrossFit-style workouts are daunting because the hype around CrossFit tends to focus on how high-intensity it is rather than how functional it can be.

Wong however believes that the workouts aren’t out of reach for seniors; rather, they are essential.

“I think we need to get rid of the mindset that we are too old to do this and that. We are never too old to achieve anything we want. Of course, as we age, we must know our body and our limits.

“It’s easy to feel pressured by youngsters who tend to work out at a faster pace. In the beginning, I did feel pressured to keep up but the coaches always encouraged me to go slow.

“The coaches are really good and they make sure that I keep to good form. It is very important to have good coaches and to listen to advice, ” she says.

Because she is careful, Wong says that she hasn’t sustained any injuries.

“Before I started working out, I used to suffer from back pain but now, even though I lift heavier weights, I have no back pain at all, ” she says. 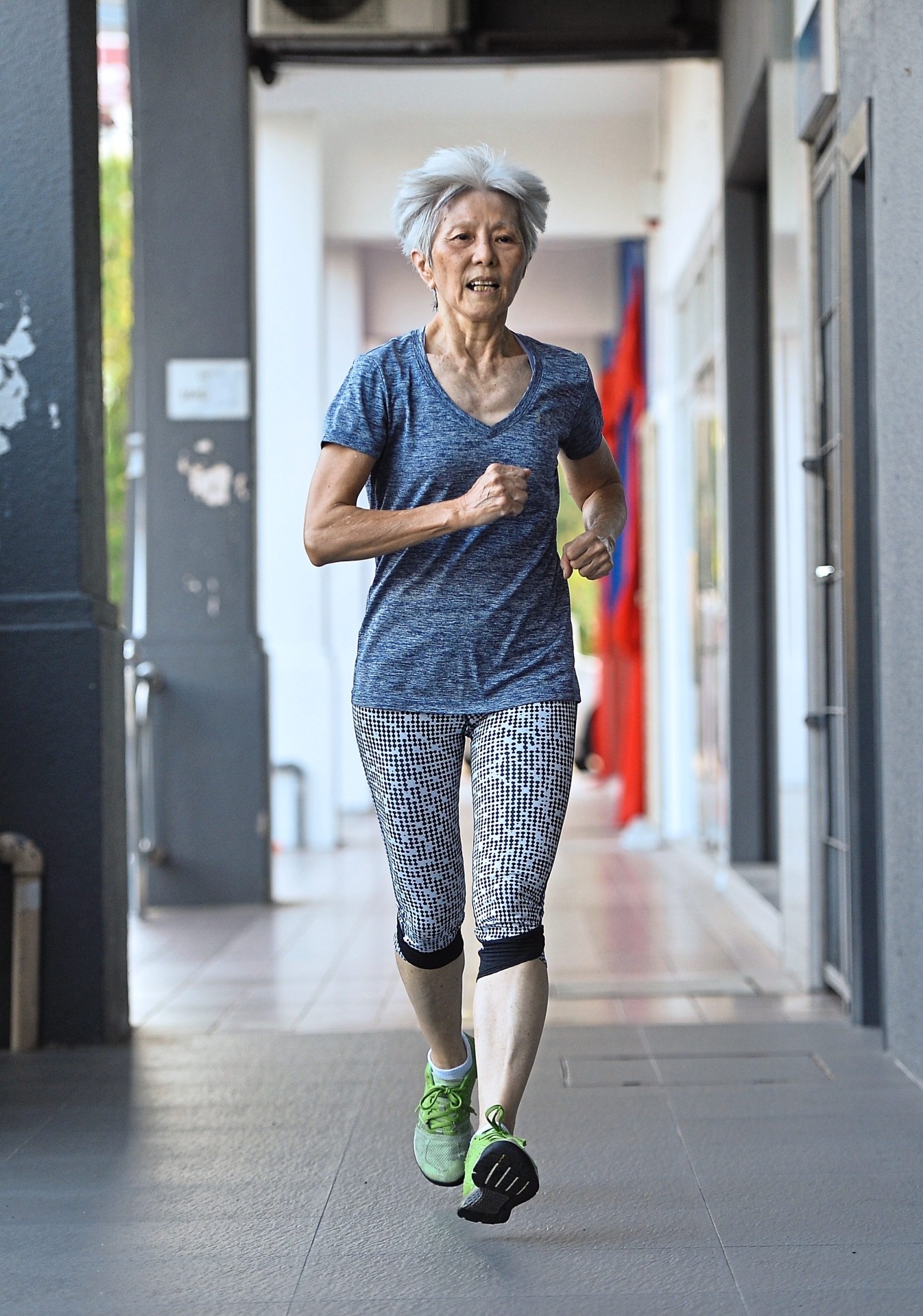 Seniors must pace themselves and not feel pressured to keep up with the youngsters.

“Many seniors are intimidated but when they start to work out, they feel stronger and realise that the workouts are achievable.

“We go slower with senior members and take more time to explain the movements. They may need more time to understand and master the exercises but if they pace themselves and keep at it, there is nothing stopping them, ” she says.

Even so, her muscles ached after every workout and often for days after.

“It wasn’t easy. It still isn’t easy but I have gotten stronger and so, it doesn’t ache as much.

“I remember the first class I did. We did squats and the day after, I struggled to walk down the stairs. Going up was painful but it was bearable; climbing down was pure torture.

“The next class had us working on our upper body and after that my arms ached like anything. But, even though I thought I would not be able to lift, I found that I could. That really motivated me, ” she recalls.

New recruit Amy Ng Siew Chin, 59, says that she was intimidated the first time she joined a strength and conditioning class. She didn’t think she could do it but after just two months, Ng has surprised even herself.

After her first two classes, Ng didn't want to return. But she's glad she did as she is much stronger and confident about herself now.

“When I came for the first few classes I thought that these workouts were crazy.

“I went home and told my family that I wasn’t going to go on but my husband and sons encouraged me to stick to it.

“So I kept coming back. I took it slow and the coaches took me through the movements step by step, over and over again and with their encouragement and also the other youngsters in the classes, I began to get better and stronger.

“It has been two months since my first class and I still don’t know what all the different movements are called but I am more confident now and stronger too. I am still learning but I have more stamina and my body is more toned, ” says Ng as she picks up a pair of dumbells to complete her set of bicep curls.