Kent Phillips, a former economist for the US government and now a Howard County master gardener, pulls radishes from a raised garden bed. Photo: TNS

At 70, Kent Phillips could have thrown in the trowel. Two knee replacements last year challenged him to grow vegetables. But Phillips, of Columbia in Maryland, the United States, soldiered on. Rather than kneel, he'd let the garden come to him. Raised beds, it would be.

"Taking care of a 1,500-square-foot garden became too onerous. It was time to downsize," the certified Maryland Master Gardener said. "This (140 square feet) is more manageable."

Now the peas, carrots, Italian kale and other crops flourish in four, neat, wood-framed plots set as much as two feet above ground outside the home Phillips shares with Mary Patton, his long-time partner.

"There's no reason older people can't grow food," he said. "Northing is better than picking a fresh head of broccoli and steaming it the same day. And the sugar snap peas, well, they never make it out of the garden."

For 42 years, Phillips has raised his own lip-smacking organic produce. For nearly a decade, since completing the University of Maryland Extension Service's Master Gardener class, he has shared his know-how with others, addressing Howard County schools, garden clubs and library groups on the highs (and woes) of growing edibles.

A retired federal economist, Phillips is a volunteer spokesman for the university's Grow It! Eat It! outreach programme. In his landscape philosophy, the lawn comes last. "Nobody in our family eats grass except Taffy, the dog," he said.

Phillips' own spring garden mirrors his presentations. The rich loamy plots face south where, sandwiched between a full-grown maple tree and several leggy pin oaks, they get 10 to 12 hours of sun daily – the minimum needed for fruiting plants, he said. The peas climb a trellis on the west edge, so as not to shade others.

The raised beds, with their deep friable soil, sustain intensive gardening, allowing plants to snuggle closer. To that end, he squeezes lettuce between the broccolis, whose ample leaves offer a welcome canopy to the greens on hot days.

"Once, while harvesting, we found a mother rabbit and her babies curled up among the lettuce," said Patton, 71. "We left them alone; we have plenty of lettuce."

A gardener herself, Patton works alongside her partner, weeding and cultivating favourites like Tuscan kale, whose bumpy leaves she harvested in early May to make a rib-sticking sausage, potato and kale soup.

When one crop is done, another digs in. Brassicas yield to tomatoes; lettuces give way to peppers. Succession planting is routine in a small raised bed garden. The key? Rich soil. Aside from adequate sunlight, soil preparation is the most critical part of a bountiful harvest, Phillips said.

"One of the biggest complaints I hear (from gardeners) is, 'Why aren't my plants growing?' Because of the fertility of the soil," he said. "It's all about the dirt."

Annually, he adds at least six inches of organic matter to his plots – obtained from the hearty compost culled from the leaves, lawn clippings and food scraps delivered to the county's Alpha Ridge Landfill in Marriottsville.

There, the waste is heated in aerated piles, returned to humus, tested for contaminants and sold to the public for US$23 (RM95) a cubic yard. But wait, there's more.

"The microbes from that compost don't wake up until the weather warms," Phillips said. "So, in spring, I supply added nitrogen – blood meal or fish emulsion – to feed early plants until the compost starts releasing its own."

To minimise disease, he grows his own seedlings, starting tomatoes and other summer crops under plant lights indoors "so I'm not importing wilts and blights from store-bought transplants. That helps, but the reality is that most fungi come in by air, so there's no way around it other than to plant resistant varieties – and there aren't a lot of them out there."

To boost pollination, Phillips keeps a small apiary in the backyard. Come autumn, he'll give the bees wide berth, having been stung 12 times in 10 minutes one day last year. "Bees get cranky in the fall," he said.

His best advice to home gardeners? "Grow what you like and what's expensive in stores," he said. "I love Brandywine tomatoes, an heirloom variety that will cost you three bucks a pound if you can find them. The US$1.75 (RM7.30) that you'll pay for a packet of seed is nothing compared to what those tomatoes are worth."

Sometimes, during harvest, Phillips will hark back to the 1970s when he began growing food as a means of feeding his family healthy fare.

"I have pictures of my kids, when they could barely walk, sitting between the rows, playing with worms or picking broccoli and eating it," he said. More recently, his five-year-old grandson spotted the ferny tops of some carrots and tugged at Phillips' shirt.

The boy dug in, pulled out a 6-inch golden root, brushed off the dirt and crunched away. Buried treasure, his granddad thought – and smiled. Another generation in tow.

♦ Plant vegetables where they'll get the most sun. Lettuces and greens can tolerate light shade.

♦ Take a soil test. Determine its acidity and available nutrients, and then follow recommendations based on the results. You can't fool Mother Nature.

♦ Plant the foods that you like. Why grow veggies that you'll only give away? – Tribune News Service/The Baltimore Sun/Mike Klingaman 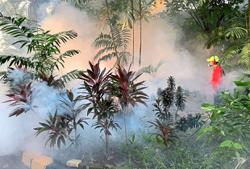 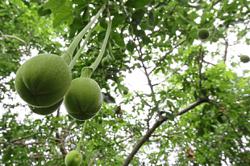 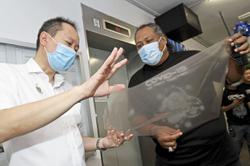