Cartoonist Zunar on his sedition charges & fight for political reform

It's important that we do not give any government a free hand, Zunar said, speaking on accountability.Photo: The Star/Sam Tham

It’s a Saturday afternoon at a major bookstore in the Gardens Mall in Kuala Lumpur. A small crowd has gathered for a session with Malaysian cartoonist Zunar.

Zunar, looking dapper in a black jacket, is candid as he speaks. His jokes elicit a lot of heavy laughter.

“If you look at my books now, they have ISBN numbers,” says the cartoonist with a broad smile, while picking up a copy of his newest cartoon collection Ketawa Pink Pink.

In this era of Malaysia Baru, Zunar is finally seeing his politically-slanted cartoon collections, available in bookshops nationwide.

Six of his titles – all nicely stacked up on a frontrow rack – were on sale at this recent autograph session, including the controversial Sapuman: Man Of Steal (2015), which only had its ban for seditious content in October 2017 lifted by the Home Ministry early last month.

For Zunar, Sapuman: Man Of Steal is just one of his banned books. In July 2010, his cartoon collections 1 Funny Malaysia and Perak Darul Kartun were banned by the previous government for allegedly having content that could “threaten public order and can influence people to riot”.

The political changes in Malaysia have a strong grip on Zunar’s cartoons. Photo: Zunar

If anything, Zunar is more upbeat these days with his newfound freedom. His fight – for political reform – through his cartoons will continue.

This coming after nearly 12 years of intimidation and harassment in the form of arrest, book banning, raids on his office, long legal battles and book confiscation. He truly remains a man of the masses, too.

Zunar takes the time to chat with each buyer at this recent book launch as he signs their books, and poses for photos and selfies.

It’s a light-hearted and peaceful gathering. Hard to believe now, but only a few months ago, things used to be very different.

Cartoons are usually connected with humour and frivolous laughs. But as Zunar’s case shows, they can sometimes be very serious.

In the days before GE14, Zunar was a man in trouble with the law. His books, including Sapuman, Twit Twit Cin Cin, Sapuman and Pirates Of The Carry-BN, weren’t even allowed to be sold in most bookstores.

The cover of the once banned Sapuman: Man Of Steal (2015). The book is widely available now. Photo: Zunar

His political cartoons, were frequently critical of the past BN government, often commenting on the previous Prime Minister and his wife, and touching on Malaysian current affairs which authorities found sensitive.

Indeed, Zunar used to pack medical supplies and a toothbrush every time he went to a book event, in fear that he would be arrested and had to stay overnight in a police lock-up.

His books also had to black out the name of their print companies to avoid raids by authorities. It’s the stuff that would make a lesser cartoonist quit. But not Zunar. For him, drawing cartoons is a calling.

“A talent is not just a gift. It’s also a responsibility. You have to use it for the benefit of others, for society,” says Zunar.

'It’s important that we do not give any government a free hand,' says Zunar on the topic of accountability. Photo: The Star/Sam Tham

Zunar, whose real name is Zulkiflee Anwar Haque, doesn’t even remember how he was introduced to drawing cartoons. All he remembers is always being interested in drawing.

“I drew cartoons everywhere. My school exercise books, my school walls, they were full of my cartoons! My hand could not stop, just conteng-conteng everywhere,” he recalls.

Zunar, 56, was born in Gurun, Kedah, the third of eight children. His parents were small town traders. His first cartoon was published when was 12 years old, in the magazine Bambino.

His interest in cartoons grew further with the Peanuts comics strip by Charles Schultz being an early career inspiration.

In 1980, Zunar had his first taste of how cartoons could get him in hot soup. For his school magazine, Zunar drew Tom Tombak, a satirical cartoon that criticised his school and teachers. For that, he was summoned by his school disciplinary board.

Despite his love for art, Zunar ended up enrolling in the science stream since cartooning was not seen as a viable career.

His first job was as a lab technician. However, he ended up working in the lab by day, and drawing comics for local magazines by night.

“Finally, I resigned. I realised I was spending more time thinking about my cartoons, and this made me lose my sense of arithmetic! And this can’t be ... doctors were depending on my calculations! But I would be worried about my cartoon deadline at night. So I thought, better not risk anyone’s life,” says Zunar.

Zunar attributes it to his time at Universiti Teknologi Malaysia (in KL), where he would frequently attend seminars and forums, often conducted by the Bar Council.

“When I attended these forums, I always wanted to ask questions. But after a while, I thought to myself, why should I ask questions? Why not I put them in cartoons?” he says.

Zunar treats cartooning as a calling as seen in this self portrait. Photo: Zunar

Zunar’s works has appeared in Gila-Gila, Panorama, Berita Harian, Harakah and Malaysiakini, among others. In 2009, he collaborated with a number of other cartoonists to set up Gedung Kartun, Malaysia’s first political cartoon magazine. That magazine was eventually banned.

In 2016, the cartoonist was charged with nine sedition charges pertaining to tweets about politician Datuk Seri Anwar Ibrahim. The same year, he was also slapped with a travel ban from the Home Ministry.

“There were times when I was in the lock-up, alone, for a few days and nights. And of course, thoughts would come to my mind. Why should I continue with cartoons? I could be doing simple cartoons and be making more money. No risk at all of being arrested there,” says Zunar.

“But again, when I got released, I would get a lot of support. And I would ask myself, ‘If not you, who will do this?’”

What kept him going, Zunar reveals, was the support of fellow Malaysians.

As a football fan, he stops mid-sentence and adds a funny observation as to how he views the kindness of strangers.

“I’m a Manchester United fan. I hate Liverpool. But they have a very good anthem: ‘You’ll Never Walk Alone’,” says Zunar with a cheeky smile.

“I’m not doing this alone. When I meet people, they give me support. I meet them on the street and they tell me, ‘keep going, we need you’. Some give moral support, some give financial support. They bought the books in bulk. When I was charged with sedition, I needed to find my bail money in less than 12 hours. And the people helped me,” he adds.

In the months after GE14, however, it looks like all of Zunar’s hard work seems to be finally vindicated. Zunar has since been cleared of both his sedition charges and travel ban by the new government.

He’s now a man in demand. This weekend he will be in Sacramento, California, for the Association of American Editorial Cartoonists 2018 convention, as well as a convention by Cartoonists Rights Network International, where he is presenting an award.

The state of the nation’s economy is a favourite topic. Photo: Zunar

For a man so passionate about politics, does he have any desire to actually go into politics?

“No. I don’t want other cartoonists to draw my face!” he answers with a snap.

“No, just joking. In the last general election, I was offered to contest. But I said no. I’m not a politician. I’m a cartoonist.”

While many associate him as being critical of the previous government, Zunar insists he won’t hesitate to criticise the present government. Despite the change of government, there are still issues, such as racial politics, basic human rights and corruption, which are still big problems.

“It’s like renting a house. If the house is in order, it’s easy to settle down and plan. But what if you come in and the house is a mess? It will take a while to clean up. It’s important that we do not give any government a free hand. No way. If you try to repeat what the previous government did, you’ll face my pen,” he warns without blinking.

Cartoonist Zunar on his sedition charges & fight for political reform

All the pieces matter 1h ago 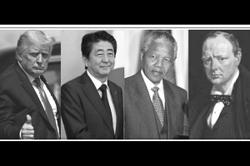 A question of health for world’s leaders 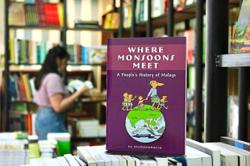