The meaning behind paper gifts for the dead

Some of the products Ng bought: an airplane, luxury cars, a boat, a three-storey mansion, and a shopping complex. (See more photos on P8-P9.) — NG KOK LEONG/The Star

Ng Kok Kheun insists on spending over RM2,000 on paper products for Qing Ming rituals. His family has tried in vain to persuade him to stop spending so much on items that will be burned up – but he stands firm.

Among the rituals the Chinese practise on the Chinese version of All Souls Day is the burning of luxury goods reproduced in paper, as they believe their departed loved ones will receive these gifts in their afterlife.

“I believe that if I give more to my departed loved ones, they will bless me more,” says Ng, the chief photographer at a local Chinese daily.

This year, the 41-year-old traditionalist has burned paper cars fashioned after luxury models like Bentleys, Porsches and Toyota Alphards; a three-storey mansion; a shopping complex; and an aeroplane at the grave of his father who died some 17 years ago.

Last year, he also burned a paper bank and a petrol station.

Perniagaan Wan Futt (Ipoh) shopowner Chee Lai Mee (right, with a staff member) showing off a paper model of a petrol station, a popular symbol of good business for the dead. Note the detail of the McDonald’s sign. Photo: The Star/Amanda Yeap

“It takes an hour to burn these things,” he says, adding that other gifts have included paper chests laden with “hell notes” (currency in the afterlife) and a paper wardrobe.

Some of the products Ng bought: an airplane, luxury cars, a boat, a three-storey mansion, and a shopping complex. The Star/Ng Kok Leong

Whenever there are new paper products in the market, he has no qualms spending generous amounts of money getting them because he believes he is doing his filial duty and not burning money.

Ng also burns paper products for deities during Chinese festivals and on the birthdays of deities as well as during the Hungry Ghost festival in September.

This year, he and his two siblings and various other family members had to use two MPVs to carry the paper paraphernalia to three different grave sites in Kuala Lumpur where Ng’s late father, grandfather and grandmother are buried. It took them the whole day, from 8am to 5pm, to complete all the rituals.

From far away Essex, Britain, a Malaysian Chinese explains via a Whatsapp text interview how it gives her great joy to pay her respects on Qing Ming at her father and grandfather’s graves in Kuala Lumpur when she visits.

If she cannot visit, “it will be a quiet observation and we offer prayers in our hearts,” says the woman who only wants to be known as H. Leung.

Her family does not believe in burning paper offerings, though. Instead, they offer fruits, flowers, meats and wine at the grave sites.

Her mother, who lives in KL, attends to the family’s ancestral graves: “She is the real heroine when it comes to the upkeep of the graves. We respect and support her,” says Leung.

“Qing Ming is about ensuring the graves are kept well, as the Chinese believe that their luck would be affected if they graves are left in a neglected or bad state,” Leung says

She tells the story of how her husband’s family was contacted a few years ago about an ancestral tomb in China that had been desecrated.

“My husband’s ancestor has a big tomb in Guangzhou. He was an important official during the Qing Dynasty. The descendants were asked to repair his grave after a grave robbery,” she says, adding that the family quickly made repairs followed by the proper offerings.

A staff member at the Yung Fatt shop in Petaling Jaya holding up paper models of the latest smartphones and other tech gadgets; note the nice touch of a phone screen showing the Pokemon Go game. Photo: The Star/Art Chen

Pageant director Jenet Foo, 40, of Klang, says: “Some people will burn fire crackers and shout, ‘huat ah’, (meaning “prosperity” in Hokkien) at the grave sites.” She, however, feels this is not the right thing to do.

“It would be somewhat queer, inappropriate even, to shout a wish for prosperity at this time. Children will also be wondering why grown-ups light fire crackers and seem so happy at the graves!”

What her family does is offer steamed sponge cakes or huat kuih (in Hokkien); these are a popular offering during Qing Ming, as the Chinese believe they can bring good luck to descendants, especially those who have businesses.

Only the richest and most expensive foods for the departed. Photo: The Star/Low Lay Phon

The families will also cook the favourite foods of their departed loved ones and offer them at the grave sites; most of the food is either eaten at the grave or taken home to be eaten later. However, a few items are generally left behind to allow the spirits of the departed time to indulge in their “meals”.

Foo’s family is quite progressive in that they are fine with her paying her respects at her maternal grandfather’s tomb even though she is married. (Understanding cultural practices above explains why married daughters were traditionally not allowed to do this.)

The meaning behind paper gifts for the dead 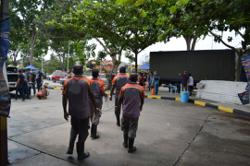 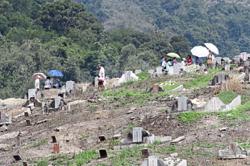 Not a ‘grave’ issue for the diehards