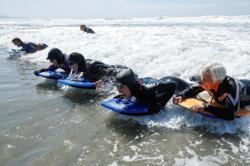 Sarah Faudzi was just 13 when she rode her first wave and it really was love at first ride. She was probably one of the few teenage girls to surf along the east coast of the peninsula at the time but Sarah wasn’t daunted. No, she was stoked – a term which, she insists, best describes the feeling one gets while surfing.

“No other word can quite capture the excitement of surfing. There is nothing in the world like surfing for me,” she says, passionately. “I’ve tried other sports but nothing gives me the same satisfaction. I just feel so stoked when I’m surfing,” says the pint-sized 20-year-old who, at 156cm, stands at least a foot-and-a-half below the surfboard that is propped up beside her.

“It’s my father’s board,” she explains. “I’m still using his but I will have to get my own soon. This one’s a little big.”

Sarah had an early introduction to surfing.

Her father Mohd Faudzi Mohd Noor was one of the pioneers in the Malaysian surf scene some 15 years ago, and she grew up watching him surf with his peers from the time she was old enough to remember.

Mohd Faudzi, 57, began teaching his daughter the basics of surfing very early on: Sarah began paddling on a surfboard when she was just seven and it didn’t take long for her to progress from paddling to popping up (getting onto her feet, kind of like an explosive pushup – when she was just 10!) to actually catching a wave and riding it.

Clearly, Sarah has inherited her dad’s passion and talent for surfing.

“Surfing has always been a part of my life. As soon as I turned seven, my dad started taking me on his surf trips to Bali. So surfing was never something foreign and my parents encouraged my brother and me to surf,” says Sarah, now an undergraduate at Universiti Malaya.

Nurain Mohd Isa, or Pinky as she is fondly known, learnt to surf three years ago while she was at Batu Buruk in Terengganu.

She is among a growing circle of intrepid Malaysian girls who love to surf and aren’t bashful about their passion. They aren’t daunted by the waves that sometimes tower over them, the water that often pounds on them or the blazing sun that burns their skin.

And they certainly aren’t bothered by the fact they are very much a minority in the surf scene, not just in Malaysia but globally.

“There are maybe 50 Malaysian girls who surf regularly. This actually is a huge jump from just a decade ago when you could count the number of female surfers with the fingers on one hand. A few years ago, for example, competitions would only have one heat for women as there would be just four of five competing. At the Tioman Festival this time, we had three heats!” says Sarah, her eyes glinting with enthusiasm.

Mad about the monsoon

While most Malaysians shun the beaches during the monsoon season, these surfer girls wait gleefully for the rainy season to arrive each year as it guarantees them the big, voluminous waves they need to surf. In fact, they look forlorn for a split second at the mere mention of the off season during which they usually travel to neighbouring surf spots like Indonesia and Thailand to get their fix.

“We love the monsoon season. We’re always on our phones, checking the weather forecast. The minute we see that the wind conditions and the waves are going to be ideal for surfing, we will arrange for a road trip to the east coast. There is usually a two- or three-car convoy and we make stops along the coast, in search of the best spot,” explains Nurain Mohd Isa, 26, or Pinky as she is fondly called.

For surfers, the bigger the wave the more intense the feeling and the more awesome the adventure.

Sarah Fauzi grew up watching her father surf. She had her first lesson when she was seven and rode her first wave six years later.

Pinky started surfing more recently. She was a student at Uniten Muadzam Shah in Pahang and was on a beach trip with her friends to Batu Buruk in Terengganu three years ago when she spotted a group of youths surfing.

Her interest was immediately piqued – like many Malaysians, she hadn’t a clue that Malaysia had surf spots.

She learnt the basics of surfing from some of the locals who regularly surf on the beach and before long, she was surfing too. Pinky got hooked and she has since competed in numerous surfing competitions, even earning a podium finish a couple of times.

Up until recently, Pinky didn’t even own a surfboard. Fortunately surfboards are readily available for rent at the many surf spots along the coast.

“Any chance I get I want to make a trip to the coast to surf,” she says.

Her parents, however, were not wild about the idea of her surfing. First of all, they were afraid that it was too dangerous. Also, they were under the impression it wasn’t a sport for girls. Finally, her mother was concerned about the tan Pinky was sporting that just kept deepening.

“My mother was horrified when I came back after I began surfing,” says Pinky with a laugh. “I used to be quite light skinned and when I came back looking like this (referring to her completely natural bronze tan), my mother was very upset. But, after I won a couple of competitions, she realised that it was something I was good at and loved and she relented,” says Pinky.

The lack of awareness about the sport among Malaysians is one reason it hasn’t quite taken off even though we have surf spots and surf schools just in our back yard, says Farisha Mazlan, 29.

“I think many Malaysians have the perception that it’s dangerous because surfing is an extreme sport that involves big waves and often, strong winds.

“Most Malaysians are not exposed to surfing and don’t know much about it. But as long as you have swimming skills and some knowledge about the tides and currents as well as the skills involved, it’s fine. Also, you need to have a high level of stamina to surf as you have to work your whole body,” says the mother of one from Kuantan who has been surfing for 12 years. Farisha loves surfing at Cherating and Pantai Pelindung a spot closer to her home which also has “quality waves on a good day”.

“Anyone can surf,” says veteran surfer Nur Hawani Norrizan, 36, when asked if the sport was indeed more challenging for women. “Maybe guys naturally have more strength than girls and that may be an advantage because surfing has a lot to do with strength and endurance.

“Surfing is extremely tiring because you have to paddle against the current and keep your control and balance against the wave all the time. But I think as long as one has the passion, the patience and the perseverance, anyone can surf. And I definitely think ladies can surf as well as men.”

Veteran surfer Nur Hawani Norrizan, 36 reckons that while men may naturally have more strength than girls it does not mean they can surf better.

Wani (as she is fondly called) began surfing two decades ago, when she was 17. Coming from KL, she had to take lessons at the surf pool at Sunway Lagoon which remains the only place to surf in the Klang Valley.

“I’d just sat for my SPM examination which meant I had the licence (from my parents) to go out and to take surf lessons. My interest in surfing actually started a couple of years before that when we were on a family holiday in Bali and were staying by the beach at Kuta.

“I noticed the surfers out at sea and I asked my mother about them. The following year, we went to Australia where I saw even more surfers. Before flying home, I bought a surf magazine and that just fuelled my curiosity and I shared my interest with some of my friends. So when my friends heard about the surf pool, we decided to go for it,” she says.

Soon after, they visited the actual surf sites on the east coast and there has been no turning back since. Though she has surfed in Bali, Thailand and Australia, Wani prefers to surf domestically even though the waves may not be as spectacular.

“To me, the best spots are the ones here in Malaysia. For one thing, I get to surf with my friends here and also, the bottom is sand and not reef (which can be quite unpleasant). Also, it’s home,” she says.

Wani is among the first female surfers in Malaysia. Another is Iman Azana Shaharani, 34. Both women are freelancers – Wani is a videographer while Iman is a programmer – which is ideal as they are able to arrange their work schedule around their surf trips, particularly when surf season begins.

“When we started surfing, there were maybe five other women who surfed. It’s really cool to see so many more girls out there now as we get to share our knowledge and learn from each other,” says Wani. 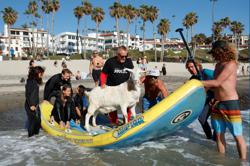