By SHOBNA PERIAYAIH and NISHAL LAURENCE

In the past year, over 3,000 children have attended workshops that introduce the idea of changemaking to them. They got to tackle problems and issues by exploring how they could play a part and improve things.

The finale of the workshop series – run by WOMEN:girls, under the auspices of the Ministry of Education and with content developed together with Unicef and Digi Telecommunications – was the first ever Young Changemakers Summit held last week. The summit, held in conjunction with Universal Children’s Day on Nov 20, was run by children for children.

It was attended by 300 young changemakers and their enablers (parents, teachers, family and private corporations).

The highlight of the summit was the Tuanku Bainun Young Changemakers Awards which received over 150 nominations nationwide. Ten finalists were selected for stepping up and taking action to make the world a better place.

Of the 10 finalists, these three winners were deemed the most courageous and inspiring. They each brought home a trophy and RM2,000.

She cannot open her own bank account yet but eight-year-old Serena Zara Taufiq already has a social enterprise. Other children were content to be swept by the rainbow loom craze and made it their hobby for a while. But Serena has taken her loom crafting a step further.

For the past two years, she has been combining her creativity in crafts and her entrepreneurial spirit to raise funds to help the disadvantaged. 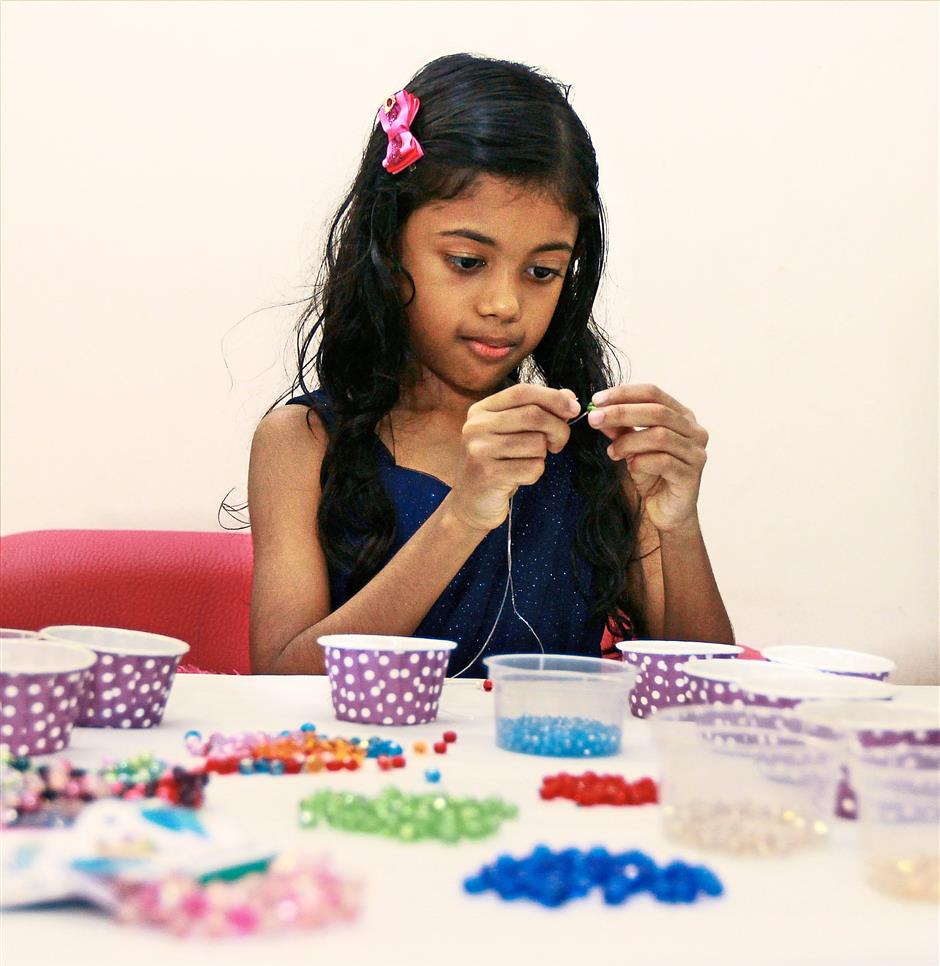 This initiative has earned Serena the award of Young Changemaker.

“I feel strongly for children especially those with special needs and those who have lost their parents. My aim is to make their life easier and put a smile on their faces with the profits of my sales,” says the pint-sized schoolgirl who gave her acceptance speech confidently but was shy when interviewed.

She calls her business Serena’s Secret, with the tag line “gems from the heart”.

“This is because gems are pure and fresh just like children. I learned how to make accessories from YouTube videos and books. Now, I have started creating my own designs and I producing crystal bracelets and pearl beaded accessories,” says the British International School student.

She was motivated to earn money from her crafting hobby because she was inspired by her five-year-old sister Sharleez who has autism. Serena contributes her profits to the Hatching Centre, Petaling Jaya where Sharleez goes for her intervention programmes. The funds go towards buying therapy equipment for special needs children.

“Serena spends most of her time in the autism centre that Sharleez attends. She spends time playing, feeding and reading books to the children there. She has made friends there and enjoys the interaction, which inspired her to start this business,” says Serena’s mother Wan Himratul Azliza.

Serena has created many platforms to market her crafts. She makes her accessories and sells them to her family and friends via chat groups and word of mouth. She also runs her craft booths in various bazaars and locations.

There are also plans to set up a website so she can reach more customers.

“My most satisfying moment was when I had a sale and made a profit of RM2300, which I contributed to the Hatching Centre,” says Serena proudly.

She has also trained others - five adults and 11 children - to make handcrafted accessories so that they too can help the centre.

“I hope Serena’s Secret will not only be a brand but an inspiration for the people and the world to understand autism better. I hope my business will grow big enough to offer job opportunities for these talented children in the future.

“Sharleez has made me a better person and I will always be there for her. I want everyone to love their children, especially the underprivileged ones because they need your love and friendship more than anyone else,” says Serena

Her mother says Serena’s drive and social awareness have always distinguished her. “Serena has always been a positive child and a caring sister to Sharleez. She is always there for her sister. I am proud that Serena has good social motivations,” she says. 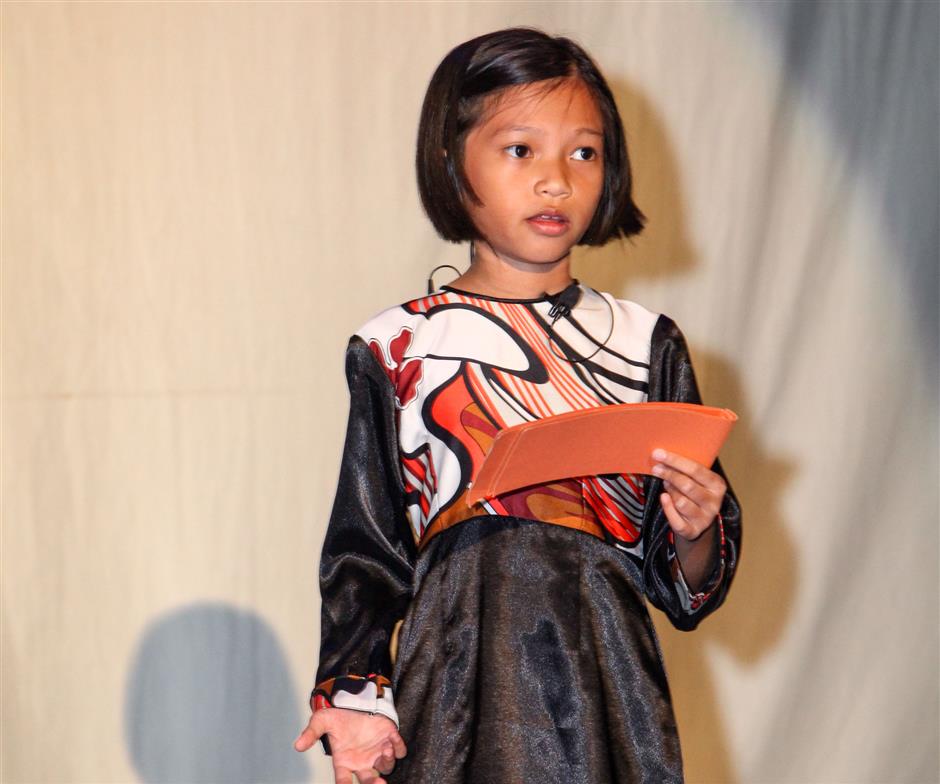 Nine-year-old Medina is not a trained therapist but she has been of great help to the special needs children at the Yireh Foundation in Puchong, Selangor, for the past three years.

She goes with her mother to the centre every week and does all the things that children her age like, such as playing music and doing art. But Medinah understands that her friends at the centre have difficulties and challenges to overcome.

“Drawing straight lines may be simple for us but it’s not simple for them,” says Medina who does activities like drawing and colouring with the children at the centre.

“It’s to help them develop their motor skills. Engaging with Medina also gives the special needs children the opportunity to develop their social skills.

But it wasn’t always easy for the Standard Three pupil to work with the children.

Medina initially found it hard to engage with the children as some lack social skills. But she persevered. “It’s because of the children. They are usually really happy to see us and for that one reason, I keep myself going there once a week,” says Medina who believes music and art are mediums that can help the disabled communicate.

“The children love challenges,” she adds, proud of their progress.

Medina has also volunteered elsewhere. In 2013, she volunteered at an orphanage in Chiangmai, Thailand. She was also a part of the Kelantan Food Relief effort in 2014 where she helped to pack goods.

By now, she has had three years of teaching experience.

“I am officially a teacher now,” she says with a laugh when receiving her Young Changemaker award.

“Even my grandmother loves to eat turtle eggs. She thinks it’s only food but she doesn’t realise she is endangering the turtles,” says Medina unhappily.

One of the first initiatives she did was to make postcards about endangered animals and how to help them.

“I made all the postcards and they were sold out,” says Medina who hopes to write a book on Malaysia some day. “What you do can make a difference. You have to decide what kind of a difference you want to make,” she says.

Lee Zixuan’s teacher Shee Yuen Ling made her join the Young Changemakers programme because she believes that the 11-year-old schoolgirl is an inspiration to those around her.

Zixuan suffers from cloacal malformations (a malformation in females where the rectum, her vagina, and urinary tract are fused together, creating a single common channel) but the Kampar schoolgirl has borne her health issues with courage and determination.

“Zixuan is obviously a bright girl, as you can see. She is very optimistic and always thinks positively,” says Shee during the awards ceremony.

Although so young, Zixuan has learnt to live and deal with her challenges bravely. 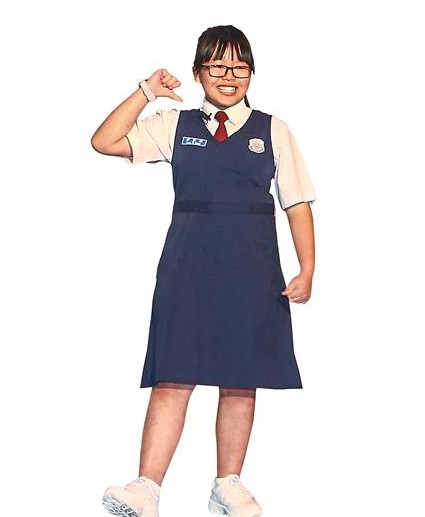 Lee Zixuan has to deal with challenging health issues but that has not stopped her from living her life fully.

She has also triumphed over her adversities and worked hard in her studies. Zixuan is not only a top student but also active in co-curricular activities.

She has participated in storytelling, public speaking and choral speaking competitions at the district, national and international level.

But things were not always easy for her.

In kindergarten, her classmates often teased her. It was hard for other children to understand her struggles and be supportive.

“For most people, friends are really precious. But everyone refused to be my friend. I had no friends during my kindergarten years,” recalls Zixuan.

Things got better in primary school where she made friends and had supportive teachers.

“I was treated with patience, tolerance and received a lot of tender, loving care from my teachers and friends.

“When I feel helpless and want to give up, I relax, clear my mind and attract positive vibes,” says the young girl.

Last year was tough for Zixuan. She had to undergo a major surgery and had to wear diapers to school.

“I was glad my friends were understanding about my condition but there were times they teased me too,” says Zixuan who has undergone more than 10 surgeries.

Still, she never went a day without a smile.

“Please don’t be affected by your physical difficulties and try to be the best in everything you do,” emphasises Zixuan who wants to share her story and inspire others to live courageously regardless of their circumstances.

These are the other finalists for the Young Changemakers Award.

Ryan Mahendran, nine, actively involves himself in an inclusive outdoor classroom, a programme that is run for children with special needs.

Chrisalynn Lim Ching Yen, 13, has been raising money to travel and help underprivileged communities around the world.

Mohammad Nor Hafizudin Mohamed Abdullah,14, a leukaemia patient raises funds to help other children with cancer.