Koggelavani says the main aim of GoodKids is to develop and boost the self-confidence of the students. Photos: Javad Tizmaghz

Aditya (not his real name) is not the most attentive of students. This teenager has the attention span of a goldfish. “When his teachers step out to go to the office or the staff room, they have to take him along and make him stand outside. He can’t be left unattended,” says Koggelavani Muniandy, 34, one of the co-founders of GoodKids, in an interview earlier this week in Petaling Jaya.

Aditya is a youth-at-risk, a student who struggles with his studies and is also at risk of falling into gangsterism, alcohol and drug use.

But things began to change for the better when he joined the GoodKids programme at his school.

The 20-week programme utilises elements of the performing arts, namely percussion, stomping and acting as tools for the participating youths to build their self-confidence and express themselves.

Koggelavani recalls the initial sessions with Aditya. In this programme, the students meet for two hours, either on Wednesdays or Sundays.

“He could not pay attention. Even when we told him not to talk with the other students, the moment you turned away, he was already doing something.

“But during one of the sessions, we put him in charge of the drums. Surprisingly, he was able to hold a beat for a full five minutes!” she enthuses.

In fact, he now pays better attention in class and participates in discussions. He even reprimands his fellow classmates for not listening to the teacher.

Aditya is one of the 70 students, ranging from 13 to 17, from three schools, two shelter homes and one Orang Asli village, who is part of this year’s GoodKids programme which will culminate in a live show at PJ Live Arts, Jaya One on Aug 13. 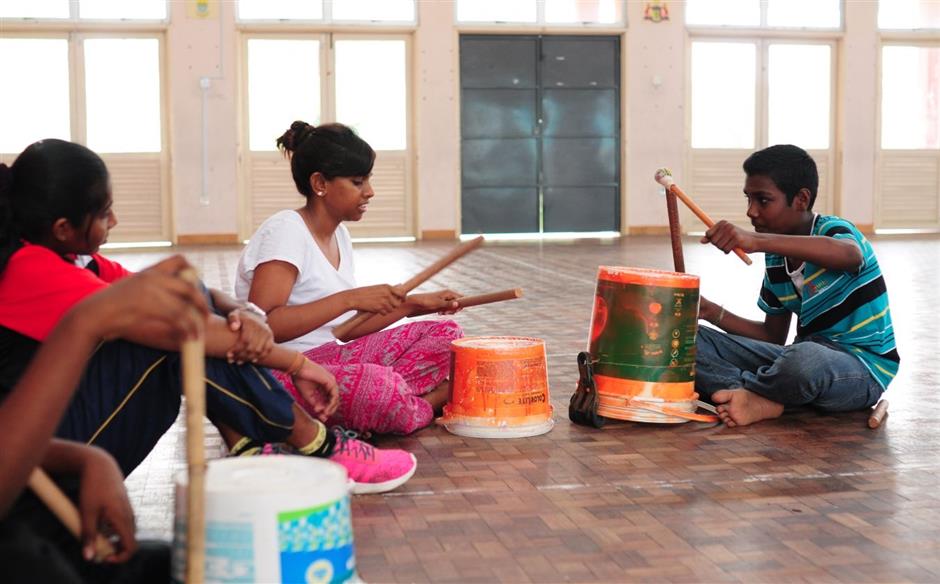 Naaraayini (centre) is the person responsible for mapping out the 20-week training modules for the GoodKids programme.

Called GoodKids League 2016, the talent show will see the students competing for the top prize – professional music classses by the Rock Academy.

GoodKids League aims to provide an avenue for the students to showcase their talents, which Koggelavani believes, will change their thinking.

“Because of the background that they come from, which is urban poor, they have always been told that they cannot do a lot of things, that they are not capable enough.

“Just because they don’t do well in school, they are deemed as incapable of anything else. We don’t agree with this because we think there are different ways to educate different people,” she elaborates.

Goodkids finds its roots in a pilot project at SMK Taman Tasik, Ampang in 2014. K. Nadarajah, one of the school teachers, roped in volunteers and counsellors for an eight-month project, which gave the youth-at-risk individuals the chance to express themselves via theatre. 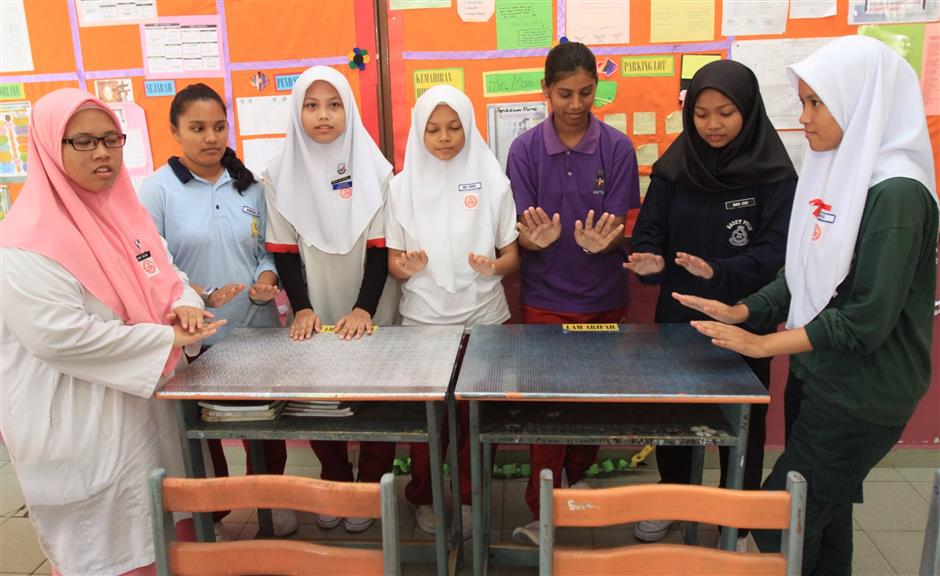 Students at the Methodist Girls School in KL during their Wednesday afternoon GoodKids training. Photo: The Star/Low Boon Tat

This is how Koggelavani, her uncle Balasubramaniam Somasundram and his daughter Naaraayini got involved. Balasubramaniam is a counsellor with non-governmental organisation Educational, Welfare & Research Foundation (EWRF), while Nadarajah is the vice-president.

The project culminated with a full-fledged play called My Story, written and performed by the students, at the Ampang Jaya Municipal Council Auditorium. As the title suggests, the students acted out what they actually go through at home, in school and life in general, ranging from abuse and bullying to peer pressure.

The following year, percussion and stomping were introduced into the programme. Koggelavani says the second batch of students did not respond well to acting. So percussion was the focus. Interestingly, all the percussion instruments are made by the students themselves using recyclable items such as paint buckets, water bottles, tin cans and wood.

This time, the students were trained and they performed at a corporate event by the Malaysian Global Innovation and Creativity Centre (MaGIC).

“We saw the impact these kids had after the performance. From then onwards, we knew this was working and we should establish a proper organisation,” she recalls.

With the training she received at the MaGIC Accelerator Programme, Koggelavani, together with her uncle and cousin mapped out the structure and mechanics of GoodKids, which began operations in February this year. 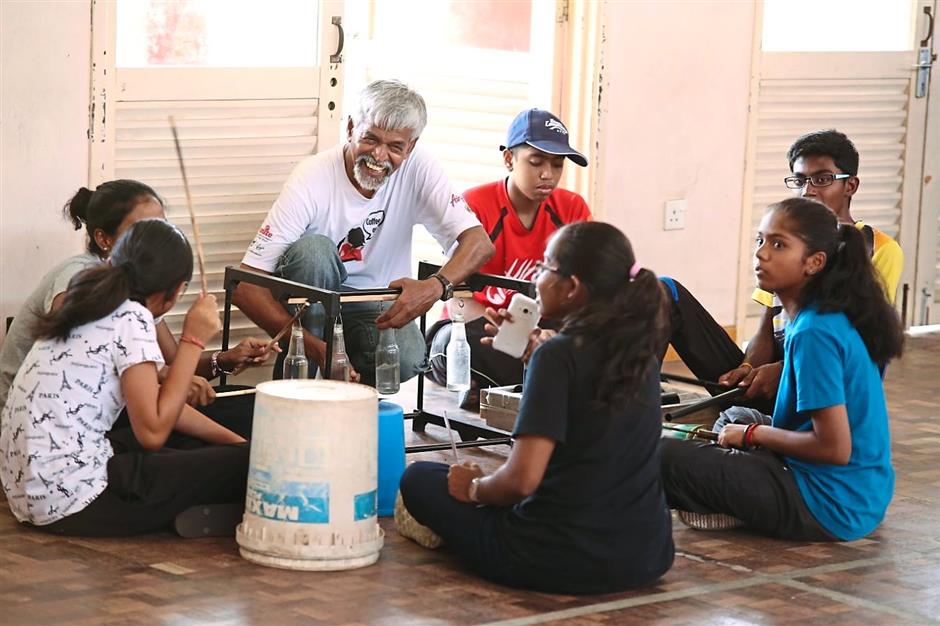 Balasubramaniam, one of the founding members of GoodKids, acts as a counsellor for the students. Photo: Dnesh Images

Balasubramaniam, 63, who holds a Masters degree in Rehabilitation Counselling Psychology, has worked with troubled youths for the past 30 years. He was also the principle for The Handicap Children Centre in Penang, counsellor at The Mind Faculty and even a lecturer at TAR College.

Koggelavani, an engineer by qualification, expanded her portfolio into start-ups when she worked in Cradle Fund.

As for Naaraayini, 24, she has a diploma in music and a diploma is psychology.

They form the core of GoodKids, with Naaraayani taking care of the training modules.

Balasubramaniam acts as the counsellor and Koggelavani manages the operations, fund-raising and communication at GoodKids.

After acquiring volunteers, the Goodkids team brought in No Noise Percussion and actor Nisha Sundrum to train them on how to teach drums and how to teach acting and put up a full-fledged theatre production.

GoodKids is supported by MaGIC, ECM Libra Foundation, which helps poor Malaysian children, and the Make It Right Movement. EWRF hires the social enterprise as a service provider to run the programme for them.

But how do they select the students for the 20-week programme? With a limited capacity of 25 students per centre, the team works hand-in-hand with the respective counsellors and disciplinary teachers to identify such students

Koggelavani says for each session, the team has two objectives to achieve.

“One is the music objectiver, the other is the interpersonal development. For example, in one of the weeks, they need to know how to change from one rhythm to another. On the counselling part, they will need to be able to speak up in front of their peers,” explains Koggelavani.

As for the acting aspect, the students are given real life scenarios to act out. After the performance, the students and the volunteers will talk about the decisions their characters made in the skit.

“The idea is not to tell them what to do but give them the ability to think and rationalise a decision. Many times, these kids have been told what to do and what not to do. That’s what makes them rebellious. We actually let them speak. We listen to them and then we rationalise with them,” she concludes.