Misha Omar and her wardrobe malfunction

Singer Misha Omar, who rose to fame with hits like Bunga-Bunga Cinta and Pulangkan, seems to have gone a bit quiet in recent years but she’s back with a new single, Terimaku Seadanya, with Hafiz Suip.

Besides catching up on what she’s been up to (read all about that here), we also put the 34-year-old Misha’s spontaneity to the test (since she just came off reality comedy and music series Juara Parodi and won!) with a round of rapid fire questions.

What did you have for breakfast today?

A cup of Milo.

Who would you like to sing a duet with that you haven’t?

A song you wished you had sung?

What are you currently listening to?

A lot! I had a wig on one time and while I was singing, it slipped all the down way to my shoulders. I had to go to the side of the stage and got my makeup artist to fix it while I continued singing.

And another time, during a live telecast, my dress got stuck on something. I had my in-ear monitor on and I couldn’t hear that people were shouting “kain! kain!” to warn me. There’s a video of it on YouTube.

What’s your biggest achievement in life?

I get to do something that I’m passionate about. I like to sing and I got to be a singer.

Misha Omar and her wardrobe malfunction 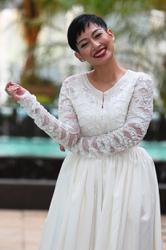 5 famous works of art that inspired great music and songs