R. Arumugam, better known as Spider-Man, dives across to make an acrobatic save to block a powerful shot from South Korean striker Jung Hae Won during the Merdeka Tournament final on July 15, 1979. Captain Soh Chin Aun (right), Bakri Ibni (on the ground) and Shukor Salleh look on anxiously. Malaysia and South Korea shared the trophy after a 0-0 draw at Stadium Merdeka. Between July 1979 and April 1980, Malaysia played South Korea a total of four times, making these fiery ties such blockbuster affairs as both teams strived to be the best in Asia. Photos: The Star Archives

Where does fact end and fiction begin? When it comes to Malaysia’s greatest – and arguably, most heartbreaking – football story, the Asian Group 2 pre-Olympic football qualifying rounds in Kuala Lumpur in early 1980 is a tale of love and spirit for the country that has transcended generations.

The quest to qualify for the Moscow games, depending on who you speak to, has survived a mix of lucid and cloudy memories.

Heroes on the pitch, great football matches, a nation’s hopes and dreams, rollercoaster emotions ... the script was already written.

Soaked in bittersweet memories, OlaBola features fictional characters based on real players, people and events surrounding Malaysia’s epic Olympic (non)-journey, which took place during the months of March and April 1980.

The story on screen, despite real life revisionism creeping in, definitely has the same kind of golden-hour sheen to it.

Superstar striker Mokthar Dahari (left) greets legendary defender Soh Chin Aun during a Selangor training session in early 1979. Both played major roles in Selangor and Malaysias success in the 1970s. Mokthar quit international football in November 1979 (for an extended spell, before later returning), while Chin Aun went on to captain Malaysia at the pre-Olympic qualifiers in Kuala Lumpur in 1980. Chin Aun is the only player to have qualified for two Olympic Games (Munich, 1972, and Moscow, 1980).

It was an unforgettable period for the Malaysian national team, which had an eventful backstory, starting with shared champions honours with South Korea at the Merdeka Tournament in July 1979, Mokhtar Dahari’s winning goal at the SEA Games in Jakarta in September 1979 (retaining Malaysia’s gold from the 1977 KL games) right to Mokhtar announcing his retirement from the international game in November 1979, leaving the team with a “Luis Suarez” hole.

Preparations for the pre-Olympic football qualifying were bumpy, to say the least. Poor form and indiscipline in the camp kept making the back pages.

Sabah-born legend James Wong celebrates his winning goal against South Korea at Stadium Merdeka on April 6, 1980. His 87th minute strike was enough to see Malaysia winning the Group 3 Asian pre-Olympic qualifying tournament in Kuala Lumpur. The Malaysian national football team did not compete at the 1980 Moscow Olympic Games because the Malaysian government chose to boycott the Olympics to protest the Soviet invasion of Afghanistan in 1979.

Singh is King. Santokh Singh is another prime example that Malaysian defenders are a special breed and have become well-known in their own right. He provided a stable anchor for the national side and many forwards will best remember him for his strong, ruthless and rugged style.

Hotshot strikers Khalid Ali (left) and Hassan Sani on top of the world after scoring a hattrick each against Indonesia at Merdeka Stadium. Malaysia won 6-1. Both players emerged as the Group 3 (Asia) pre-Olympic qualifiers top scorers with six goals apiece. James Wong scored five goals, making Malaysia's strikeforce the most lethal during the campaign.

Malaysia getting whipped in the warm-up matches in late 1979 and early 1980 didn’t help. Particularly, nightmarish were the New York Cosmos and Red Star Belgrade’s visits, leaving us with 5-0 and 9-0 demolitions respectively.

Much credit to German coach Karl Weigang, who steadied the ship and worked the team into shape.

Santokh Singh quitting the national team in January 1980 and FAM’s threat to ban players from the Malaysia Cup because of their early “retirement” created added drama. Santokh did return to play impressively in the tournament.

Oh what a night Malaysian heroes (from left): James Wong, Hassan Sani, Santokh Singh and Soh Chin Aun on a lap of honour at Stadium Merdeka after beating South Korea 2-1 in the pre-Olympic qualifiers final on April 6, 1980.

The Star's front page, dated Feb 11, 1980, splashed the news of then Olympic Council Malaysia president and FAM president Datuk Seri Hamzah Abu Samah announcing that Malaysia will join the boycott of the Moscow Olympic Games in July that year. Malaysia did go on to host and win the Group Three Olympic football qualifying tournament which was held in Kuala Lumpur from March 23 to April 6. FIFA has entrusted it to us and we will proceed with hosting the tournament. If we do win the tournament, we will give up our place in the Olympics, Hamzah was quoted as saying in The Star back then.

It was worth the wait – Hassan and Wong practically lit up the tournament. Other standouts included “old man” midfielder Shukor Salleh, goalkeeper R. Arumugam and captain marvel Soh Chin Aun.

But bigger issues were stirring. In January 1980, the United States proposed and led a boycott of the Olympic Games in Moscow to protest the late 1979 Soviet invasion of Afghanistan. Malaysia were part of the block boycott of nations.

The Star’s front page, dated Feb 11, 1980, splashed the news of then Olympic Council Malaysia president and FAM president Datuk Seri Hamzah Abu Samah announcing that Malaysia would join the boycott of the Moscow Olympic Games in July that year.

Malaysia did go on to host – and, rather heroically, win – the qualifying tournament. 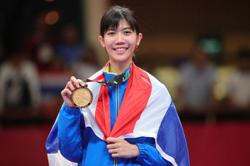