When it comes to making music, composer Datin Saidah Rastam has probably done it all.

She has written for theatre, film, dance and television, for gamelan, orchestras and electronica, for Chinese opera singers, for choral groups and martial artists.

Saidah even served as music director during the launch ceremony of the Twin Towers in Kuala Lumpur in 1999.

All that, and the talented Saidah is a qualified lawyer to boot!

“Early on, I wanted to be a concert pianist, but my parents made me read law. Eight years after practising law, I gave it up to become a professional musician,” says Saidah in a recent interview. “In that first year I wrote a musical with Jit Murad called The Storyteller. I realised I liked composing for the visual medium, and so started creating music for theatre, dance and film too!”

Malaysian music and theatre fans will probably be familiar with the name Saidah Rastam – she created the music for local shows such as Occupation (2002) and M! The Opera (2006). She is also a founding member and director of The Instant Cafe Theatre, lawyer thespian group The Reluctant Performers and gamelan group Rhythm In Bronze.

Saidah Rastam sits at the piano while the cast members of The Piano Bar stand behind (from left) Joanna Bessey, Jo Kukathas, Jit Murad, Iskandar Najmuddin and Chacko Vadaketh in 2001. Saidah has pushed on from composing for theatre to a more research-based career now. Filepic

Asked to name her favourite works, the composer named M! The Opera, which combined asli singing, Western orchestration and theatre, and Spirits (2005) a Chinese opera directed by Singaporean Goh Boon Teck, which was performed in Russia.

“A close third is Feast For Fools, with choreographer Aida Redza for the Copenhagen Arts Festival,” adds Saidah, now in her early 50s.

Saidah’s maternal grandfather was Perak’s 14th Datuk Panglima Kinta, who held 56 public service posts at the time of his death.

She is the eldest of four children, the daughter of Datuk Rastam Hadi, former managing director of Petronas and former deputy governor of Bank Negara, and Datin Rafiah Eusoff, a businesswoman.

“My mother was my earliest musical influence, as she would sing songs from the musicals, and play classical music every day,” says Saidah, who is married to Datuk Charon Mokhzani, managing director of Khazanah Research Institute and executive director of Khazanah Nasional Berhad.

“My mother played an enormous role in my childhood. She would be with us in hospitals, at school events and activities, all the while running several businesses. Today she would be called an entrepreneur, no question about it. But she also managed to be a devoted wife.”

In person, Saidah is chatty, managing to be gentle yet outspoken, refined yet vivacious all at the same time. Her laugh comes readily as she discusses Rosalie And Other Love Songs, a book she wrote on the history of Malayan music, which was published in 2014.

Rosalie is the culmination of two years of research, and was done out of a project to raise awareness about the beauty and importance of local music.

Saidah Rastam's book Rosalie And Other Love Songs, which follows the tale of how Malaysia got her national anthem. The book is published by Khazanah National.

The greatest challenge of her research, she said, was discovering how much neglect there had been towards the nation’s cultural heritage. Tan Sri P. Ramlee, for example, had died practically destitute, with honours only heaped on him after his death.

“During the Lahad Datu incursion (in 2013), the song Perajurit Tanahair (aka Inilah Barisan Kita) was played continuously (on national radio and TV). The great composer Saiful Bahri wrote this and other superb songs during the Konfrantasi era, which were broadcast by Malaysia as part of our psychological warfare (against Indonesia). Despite years of service at Filem Negara, he was dismissed with no pension, and after his sudden death, his wife had to sell cakes on the street to sustain her family,” reveals Saidah.

“Time is critical. Any good intentions we have about the conservation of our music heritage have to be acted upon now.”

She is currently developing a documentary about the early years of two local educational institutions, namely the Sultan Idris Training College and the Malay College Kuala Kangsar.

Outside her work, Saidah unwinds by listening to music. She professed to being a huge fan of soundtracks, naming Gustavo Santaolalla’s Babel, Jonny Greenwood’s There Will Be Blood and Bjork’s Dancer In The Dark as some of her favorites. On the local front, she’s a fan of pop ska group Gerhana Ska Cinta, composer Yii Kah Hoe and R&B singer Reshmonu.

Saidah will always, however, have a fondness for the old music of Malaya, created from many cultures and races all coming together. She mentions, as an example, how Tunku Abdul Rahman, when creating the Merdeka choir, had asked for its members to be from many different races. This necessitated Radio Malaya to look in churches and other diverse places for trained singers.

“P Ramlee’s father was from Acheh. Alfonso Soliano, the first conductor and creator of what’s now the RTM Orchestra, was a Filipino. Gus Steyn, one of the orchestra’s subsequent leaders whose arrangements are dazzling even today, was a Dutchman,” says Saidah.

“This diversity is our real wealth. This superb mix of cultures is what, in the 1950s, made music in this country unique in the world. Where else can you find the sound of keroncong slow fox?”

Saidah Rastam is still conducting research on the history of Malaysian music, and would appreciate any help. Do you own any old music scores or artefacts, old recordings, open reels or LPs that remain undigitised? Or are you in touch with any music personalities from the 1950s and 1960s? If you do, e-mail her at lagu.sr@gmail.com. 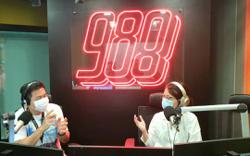