Ilham gallery is a public art space designed to support the development of Malaysian modern and contemporary art within a regional and global context.

Ilham gallery creative director and curator Valentine Willie is the person you can count on if you need to know how many pipes and wooden hornbill souvenirs were owned by pioneering artist Datuk Hoessein Enas (1924-1995), and also the kind of vinyl records he listened to while he worked in his studio in Damansara Heights in Kuala Lumpur.

All of Hoessein’s personal artefacts mentioned can be seen – and heard – at a detailed reconstruction of the Indonesian-born Malaysian artist’s work studio, which is one of the many highlights at the recently opened Ilham gallery in the ultra-modern Ilham Tower in Kuala Lumpur.

The building, designed by Foster + Partners (a London-based architecture firm), is owned by former Finance Minister and businessman Tun Daim Zainuddin, who is an avid art collector.

Tun Daim, also the patron of Ilham gallery, granted Willie and his team the opportunity to create a public gallery where education on nationhood and art is an integral part of the mission.

“This studio recreation gives the public a closer look at Hoessein Enas’s creative space. Every item here is from his studio and everything is documented. It’s a good place to start when you visit Ilham because, really, an artist’s studio is his haven, it’s where he is most creative,” says Willie during a curatorial tour at the gallery last Saturday. 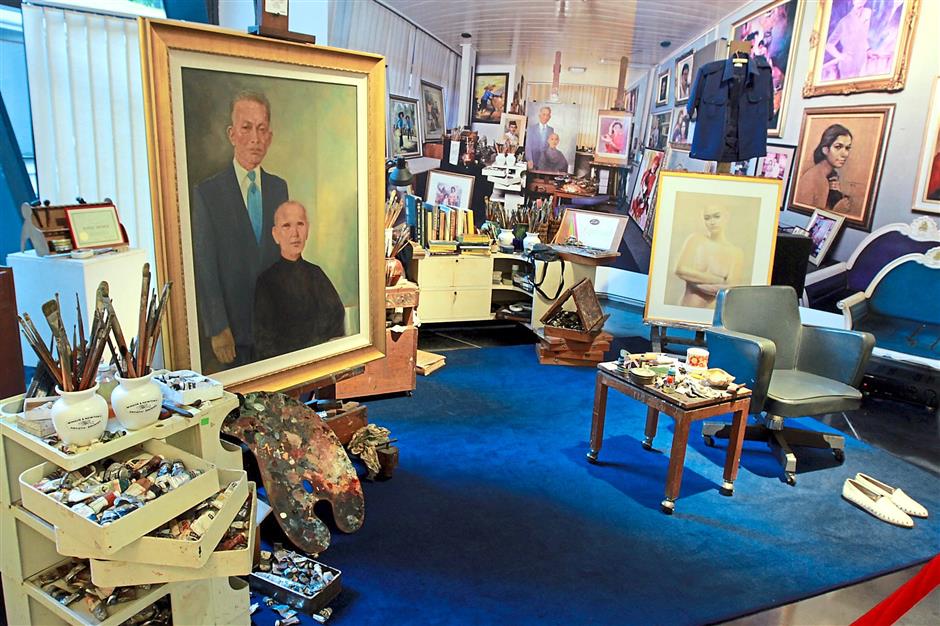 Datuk Hoessein Enas's home studio has been reassembled in Ilham Gallery, complete with the artist's brushes, easels, jacket, slippers, books and a soundtrack from his private vinyl collection. Photos: The Star/Low Lay Phon 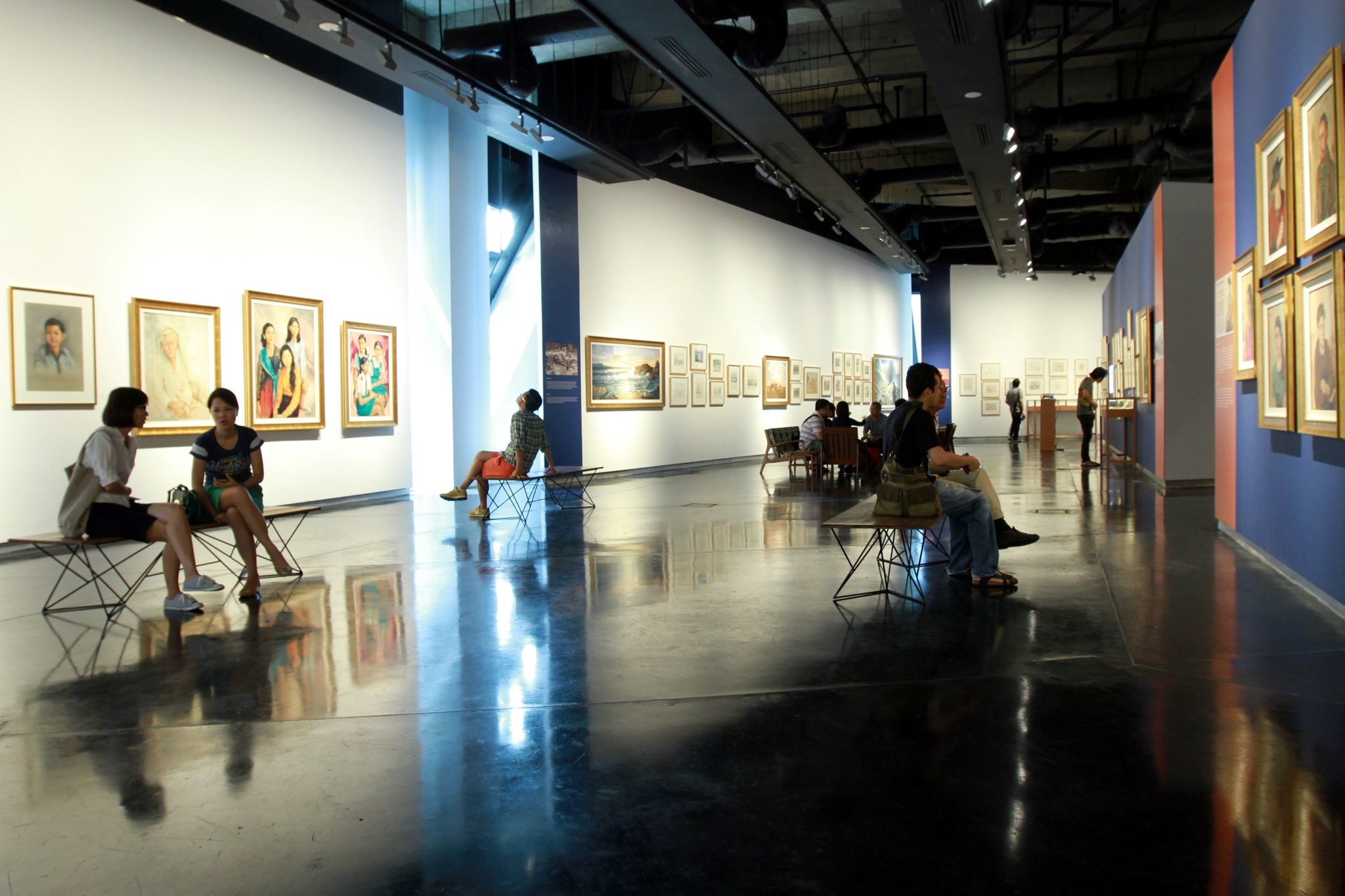 Ilham Gallery is a public art space designed to support the development of Malaysian modern and contemporary art within a regional and global context.

For gallery add-ons, a playlist (from Hoessein’s record collection) and listening stations are being installed at all the viewing areas.

“As the public view the art, it gives them a sense of what inspired the man and the conditions in which he created his art,” he adds.

All the artists are part of the gallery’s opening exhibition entitled Picturing The Nation, built around a core selection of Hoessein’s paintings and sketches.

The Sabah-born curator with a well-respected gallery owner/art dealer background was referring to the fact that the gallery was an afterthought. But he took on the challenge, when approached by Tun Daim, to make Ilham a reality, despite the space requiring renovations and a “few knocks”.

“The whole building is clad in glass. There were no gallery walls on Level 5. We added them. On Level 3 we had to adapt the small rooms with odd walls into narrow galleries and multimedia rooms,” he reveals.

With the hard hats stored and drilling done, Hoessein’s estate has now found a new home in the heart of Kuala Lumpur.

All the artwork from the estate of Hoessein, according to the Willie, were professionally restored and conserved before they were exhibited. 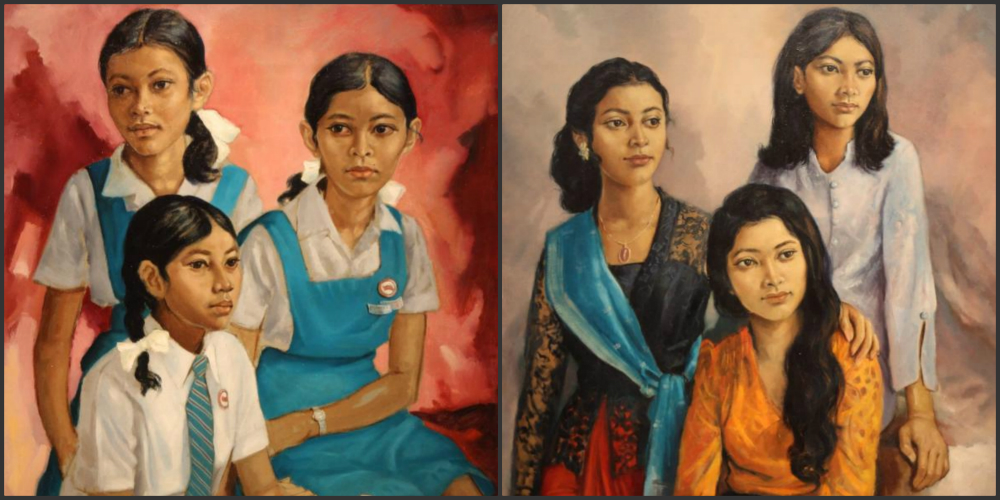 Hoessein's portrait work from his family series (oil on canvas, 1971) Tutie, Las And Jun and (right) My Daughters Tatie, Aida And Nana.

How fitting that this wonderful tribute of an exhibition – and gallery space – comes 20 years after his passing. The efforts to transform this office area into a cosy gallery – complete with retro wooden armchairs and benches – was well worth it.

The artist, commonly known as the father of Malaysian portrait painting, would have been hugely impressed seeing all his personal paintings that once hung in his hall, staircase walls and studio at home, have now been given pride of place at Ilham gallery.

Hoessein, born in Bogor, West Java, and shaped his artistic beginnings in Medan, fled Indonesia during his homeland’s revolutionary war against the Dutch occupiers. He moved to Malaya in the late 1940s – landing in Singapore in 1947, and then heading to Penang and finally settling down in Kuala Lumpur in 1949.

His was a story of an immigrant’s struggle – he was a trishaw rider and street artist during his early days in Malaya – before being spotted in Penang by Frank Sullivan, Tunku Abdul Rahman’s press secretary.

In Kuala Lumpur, Hoessein’s talent was given a broader platform as his portrait commissions – in oils and pastels – increased. He held a range of government-related jobs in the 1950s and 1960s, namely being officer in charge of aboriginal affairs with the Museum Department and later, chief of graphic design with the newly established television service of national public broadcast Radio Television Malaysia (RTM). He was the founding member of Angkatan Pelukis Semenanjung (Malaysia Painters Front).

“Hoessein’s work also provides a very important window on the national narrative, given that his life story and art intersected with some of the key moments in Malaysian history,” wrote Tun Daim in the exhibition catalogue notes.

The Hoessein Enas collection at Ilham, which ranks as one of the biggest in the country, features 30 paintings and over 200 sketches.

One of Hoessein's untitled sketches from the Malaysians - Shell Commissions book project in 1963 and (right) an early sketch of the oil painting, Admonition (1962). 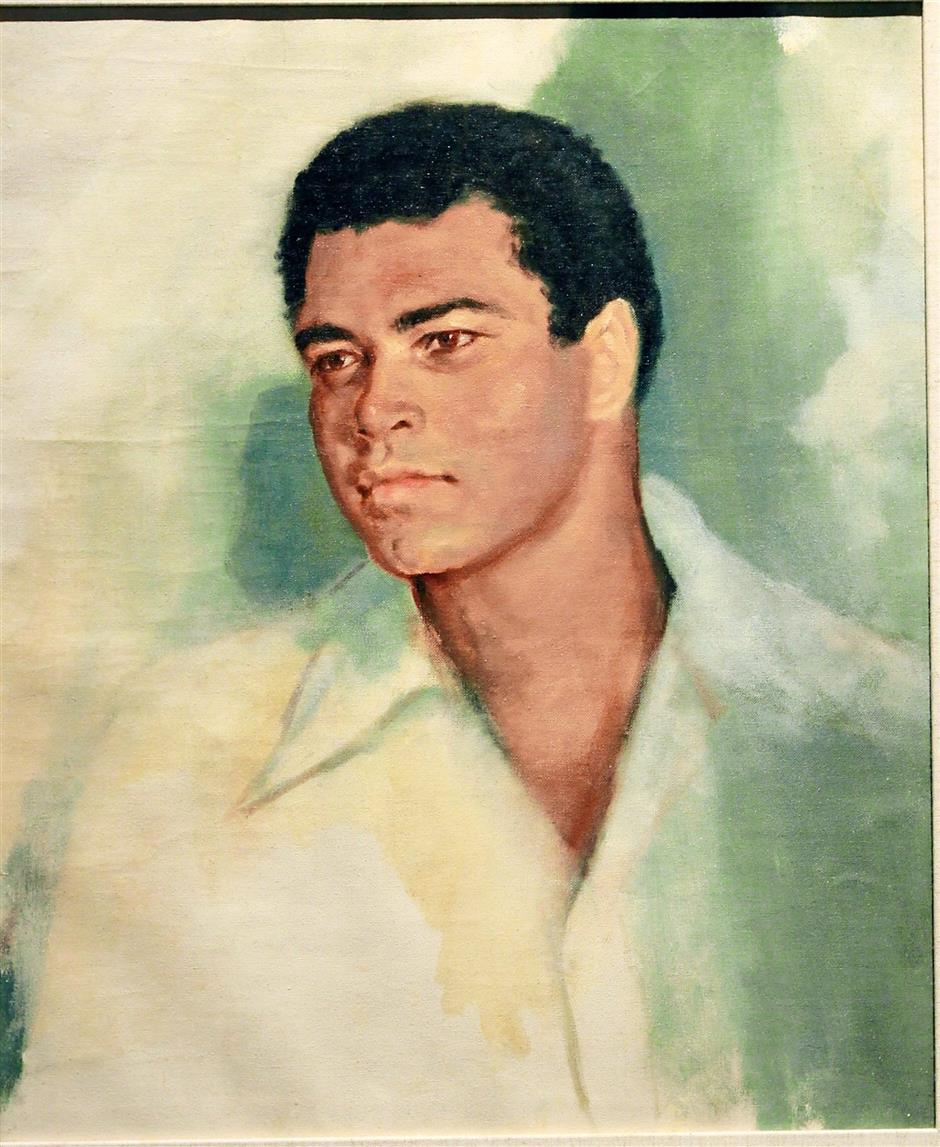 A 1975 Portrait Of Muhammad Ali by Hoessein.

In the past two years, the National Portrait Gallery, which is part of the National Visual Arts Gallery in Kuala Lumpur, held two exhibitions centred on Hoessein’s portraiture work owned by the national institution. That goes to show you Hoessein’s indelible mark in the art world here.

However, what Ilham brings to the masses – apart from the paintings – is a more personal experience as to how Hoessein made his art.

The spotlight, arguably, is on his studio and artistic process at Ilham.

“As we made an inventory of his studio, we found among his books, lots of sketches. We had 97 sketches – never seen before – falling out of his books that we were documenting. A lot of them were very famous paintings. And then we found thousands of photographs ... he was an avid cameraman.”

His photos are alluring because they capture not only the 1960s Malaysian experience, but also the exuberance of a multi-racial nation finding a shared identity.

“As a portrait artist, obviously most of these portraits were commissioned and eventually went to the people or institutions who commissioned these portraits from Hoessein. But what we found more fascinating was to build a story of his life as an artist and his practice using what material he kept for himself including his photographs, books, vinyl and sketches. In this way we were able to tell a more complete story of his artistic practice.”

A curious addition to the exhibition is Hoessein’s Portrait Of Muhammad Ali (oil on canvas). The artist was commissioned to paint the legendary boxer (at KL Hilton) when he came to the capital to fight bitter rival, Joe Bugner, in June 1975. Somehow, due to the promoter’s organisational mismanagement back then, the portrait stayed in the artist’s collection.

If anything, Hoessein’s standing as a royal portrait painter and federally-funded portrait artist was legendary as it was prolific, but when you talk about his most endearing project, it has to be the “Malaysians – Shell Commissions” book.

To commemorate Malaysia’s formation in 1963, Shell Ltd commissioned Hoessein to produce a series capturing the histories, hopes and citizenship in the newly formed country. The result was the book project, which contained a series of Hoessein’s paintings in oil, watercolour and pastel, 52 in all. 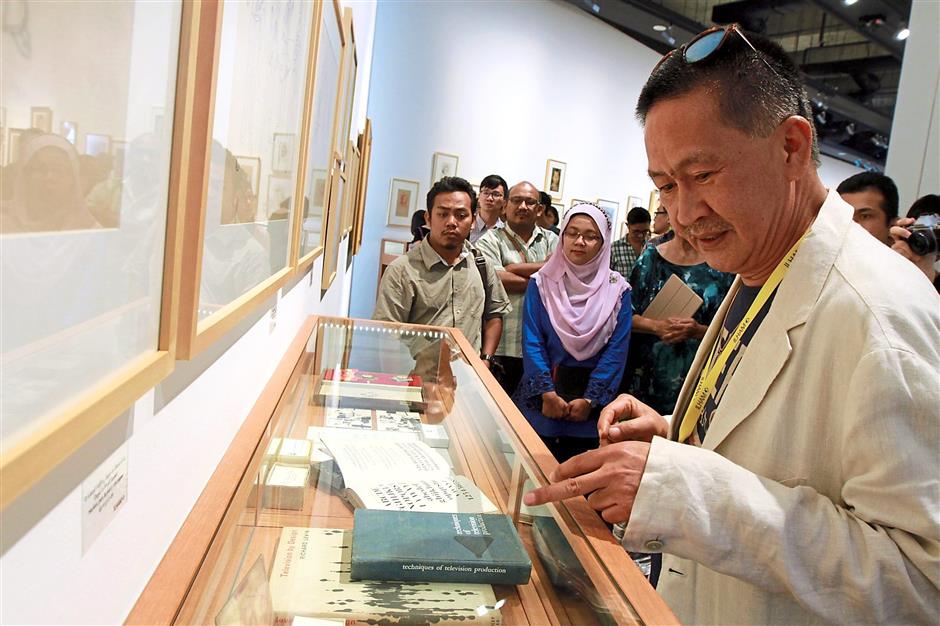 “Through Hoessein’s images, a new nation emerges. He put a face to what it means to be a Malaysian. He was one of the first artists to travel the length and breadth of the country with this Shell commission,” says Willie, who is particularly proud that Ilham has a wide selection of his preparatory sketches from this important commission in the history of local art.

Of particular interest is also a sketch of what later became Hoessein’s Admonition (oil on canvas, 1962), one of his significant works now in Tenaga Nasional Berhad’s collection.

“You see, the father reprimanding his daughter ... the pencilled sketch has all the facial features, especially of a visibily upset father. This is one of my favourite parts of showing off Hoessein’s undiscovered work. His early sketches, mostly in such good condition, present a close and careful study of how he made his classics,” says Willie.

During his lifetime, Hoessein produced everything from family portraits, set designs to architectural drawings. The exhibition, featuring Hoessein’s earliest self-portrait work from 1948 to his 1990s landscape paintings, allows the viewer to take in the full range of his illustrious career.

“We are still discovering sketches and photographs from the content of his studio and we hope to be able to change or add more of the photographs and materials in the vitrines over the period of the exhibition.”

Picturing The Nation is on exhibit at Ilham, Levels 3 & 5, Ilham Tower, No. 8, Jalan Binjai, Kuala Lumpur until Dec 31. Free admission. For more information, visit www.ilhamgallery.com. Ilham also organises school and college tours at the gallery. It has designed educational resources and tools in conjunction with the exhibition. Interested schools and colleges may e-mail info@ilhamgallery.com to arrange a tour.