Six Mashco Piro tribeswomen crouch low as they escape back into the jungle after raiding a remote lodge in Peru’s Manu National Park in the western Amazon, clutching newly-prized tools: metallic cooking pots.

The brazen daytime foray into the tourist retreat earlier in May is a rare appearance by one of the world’s most reclusive tribes that is increasingly chancing contact with the outside world.

The Mashco Piro have clashed in the past with loggers, poachers and drug traffickers who invaded their jungle enclaves, but anthropologists say the lure of modern tools is now tempting them closer than ever to far-flung villages and tourist camps.

“It’s a technological revolution,” says anthropologist Klaus Rummenhoeller, who has been studying Amazonian tribes in Peru since the 1980s. “Imagine you live in the wild and only have stone axes, and then you’re given machetes.”

Their incursions are dangerous, exposing them to the threat of violent encounters with terrified locals and modern-day diseases against which the hunter-gatherers have little immunity.

The Mashco Piro historically reject outsiders, surviving enslavement during Peru’s bloody rubber boom in the late 1800s and rebuffing the advances of Christian missionaries throughout the last century.

But in the past three years there has been a spike in sightings near the Manu National Park as members of the Mashco Piro tribe – clad only in loin cloths and armed with bows and arrows – emerge during the dry season in clearings along the Alto Madre de Dios River.

“They sound like birds,” says Guillermina Loaiza, a cook at the lodge who disturbed the tribeswomen as they rifled through her kitchen during the recent raid. “I thought it was another tourism agency playing a practical joke.”

The tribe is estimated to number no more than 600 and is split into several groups who constantly move through the jungle, occasionally constructing makeshift shelters on riverbanks where they dig for turtle eggs. Machiguenga indigenous people Antonio Aguilar (left) and Jesica Araoz pose with their children Manuel and Betsabe close to their home in Shipetiari, a village near the Alto Madre de Dios River. – Reuters

Peru’s government prohibits physical contact with the Mashco Piro and another dozen so-called “uncontacted” indigenous tribes, primarily for the tribes’ own well-being. Their immune systems carry little resistance to illnesses that other humans carry.

“It’s extremely urgent because there are more of them every time, and it’s a relatively highly transited area,” says government anthropologist Luis Felipe Torres. “Anything can happen.”

Torres says a Catholic priest and the mayor of one local town in Peru’s eastern reaches near the border with Brazil are among a small group who have tried to tempt the Mashco Piro out of their hideouts with rewards, pitying their primitive existence.

Authorities say they can do little to prevent individuals ignoring the contact ban because there is no penalty attached.

Instead, armed with a budget of just US$600,000 (RM1.9mil) a year, a government team tasked with preventing the Mashco Piro and other uncontacted tribes succumbing to modern diseases strives to dissuade outsiders from making contact.

It has happened before. In the 1980s, human-carried germs wiped out half of Peru’s Yora tribe after illegal loggers penetrated deep in the forest along roads built to facilitate oil and gas exploration. 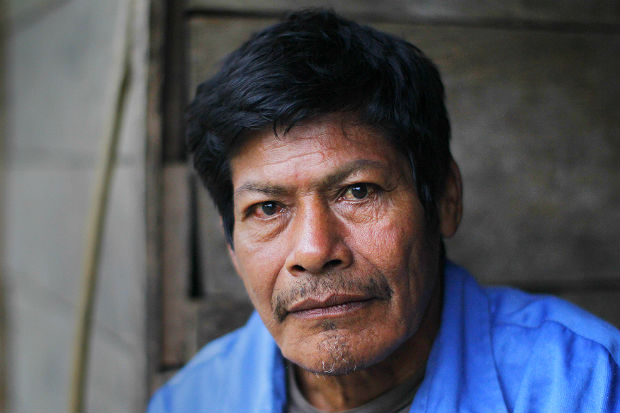 Alberto Flores, a Mascho Piro indigenous who was taken away by hunters from an uncontacted tribe during his childhood, is seen at his home in Diamante, a town near the Alto Madre de Dios River. – Reuters

Three years ago, doctor Fernando Mendieta helped prevent an outbreak of respiratory infections wreaking havoc among a group of semi-isolated of Machiguenga Indians after a Canadian searching for a lost Inca city passed through their village.

But Mendieta said he would be wary of treating the Mashco Piro because of their aggressive reputation. They killed one local man and wounded a park ranger with arrows in 2011. “I’m not going to be the first one to try and inject a Mashco Piro with a shot,” says Mendieta.

The government task force is erecting signs warning against approaching the Mashco Piro, but it may be too late to halt a rising trend.

“They should have put up the signs before, when they (Mashco Piro) first started showing up,” says Romeria Rivera, a leader in the village of Shipetiari where the wooden huts are raised on stilts to avoid flooding.

Wanting to placate the Mashco Piro, locals in the nearby town of Diamante at times leave machetes and bananas out on the shore of Alto Madre de Dios River, says logger Henry Bonifacio. “Once, we left them a cold soda,” adds Bonifacio. “One man grabbed it, felt the cold and then dropped it and left.” – Reuters