Pope Francis has ‘excommunicated’ Italy’s mafia from the church — the first time any pontiff has done so publicly.

Pope Francis has issued the strongest attack on organised crime groups by a pontiff in two decades, accusing them of practising the “the adoration of evil” and saying mafiosi (members of the mafia) are excommunicated. It was the first time a pope had used the word ‘excommunication’ — a total cutoff from the Church — in direct reference to members of organised crime.

“Those who in their lives follow this path of evil, as mafiosi do, are not in communion with God. They are excommunicated,” he said in impromptu comments at a Mass on June 21 before hundreds of thousands of people in one of Italy’s most crime-infested areas.

“This evil must be fought against, it must be pushed aside. We must say no to it,” he told the cheering crowd. “Our children are asking for it, our young people are asking for it. They are in need of hope and faith can help respond to this need.” Pope Francis waves to a girl among the crowds as he arrives to visit the John Paul I seminary in Cassano allo Jonio, southern Italy. — Reuters

He branded the local crime group, the ‘Ndrangheta, as an example of the “adoration of evil and contempt of the common good” and said the Church would exert its full force in efforts to combat organised crime. However, Vatican spokesman Father Ciro Benedettini said the pope’s stern words did not constitute a formal over-arching decree of canon (Church) law, regarding excommunication, which is a formal legal process.

Rather, he said it was more of a direct message to members of organised crime that they had effectively excommunicated themselves, reminding them that they could not participate in Church sacraments or other activities because they had distanced themselves from God through their criminal actions.

Still, the use of the highly charged word by a pope was significant because many members of organised crime in Italy see themselves as part of a religious, cult-like group, take part in sacraments, go to church and in some cases have also found complicity by some churchmen in the south.

The pope, Benedettini said, was trying to “isolate mafiosi within their own communities,” sending a message that they should not in any way be looked up to as “men of honour”. 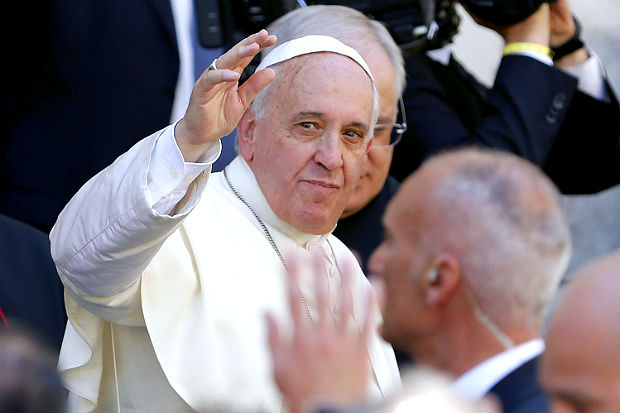 Taking on the mob: Francis is the first pope to publicly 'excommunicate' the mafia, long seen as an untouchable class in Italian society. He especially made references to the 'Ndrangheta, a loosely-structured gang outfit that originated in Calabria, Italy.

In 1993 Pope John Paul sternly warned members of Sicily’s Mafia that they would “one day face the justice of God”. The Mafia responded several months later with bomb attacks against several churches in Rome, including the Basilica of St. John’s, considered a papal church as the pope is bishop of Rome.

Francis spoke in a homily at the end of daytrip to the southern region of Calabria, home of the home of the mafia-style ‘Ndrangheta which investigators say has spread around the world.

The ‘Ndrangheta has been much harder for investigators to combat than the Sicilian Mafia because its structure is more lateral than hierarchical and its tightly-knit crime families are less flashy than the Sicilian mob and harder to penetrate.

A 2013 study by Demoskopia, an economic and social research institute, estimated the ‘Ndrangheta’s annual turnover at some €53bil (RM232bil) in 30 countries, equivalent to about 3.5% of Italy’s total official economic output. Around half of its revenues came through drug trafficking, the study found.

Francis made the trip in part to pay tribute to Nicola 'Coco' Campolongo, 3, who was killed in the town along with his grandfather in an organised crime attack last January.

The charred body of the boy, who had been entrusted to his grandfather Salvatore Iannicelli, 57 — after his parents were jailed on drugs charges — was found along with those of Iannicelli and his Moroccan girlfriend, Ibtissa Touss, 27, in a burnt-out car in the town. A 50 cent coin was found on top of the car, apparently a sign that Iannicelli had not paid a drug debt. Innocent victim: The pope's denouncement of the mafia comes after a highly publicised case of a mafia hit that involved the killing of three-year-old Nicola 'Coco' Campolongo, whose burnt body was found with the bodies of his grandfather and his girlfriend in a car in the town of Cassano allo Jonio, in Calabria, Italy.

Francis, who last January strongly denounced the murder and asked the killers to repent, comforted the boy’s father and other relatives during a meeting a Vatican spokesman called highly emotional. “Never again violence against children. May a child never again have to suffer like this. I pray for him continuously. Do not despair,” the spokesman quoted the pope as saying.

The boy’s parents and grandfather were part of a drug trafficking clan of the ‘Ndrangheta. Social workers have come under criticism for entrusting the boy to his maternal grandfather, a convicted drug runner who was out on bail.

The bishop of the area the pope visited, Nunzio Galantino, is seen as one of the most progressive in Italy’s poorer, underdeveloped south and has taken strong stands against organised crime. But there have been instances of collusion of some priests in other areas of Calabria where the ‘Ndrangheta is strongest, further south along the Italian peninsula near Reggio Calabria. — Reuters