Laughter with a cause: Clowns helping Syrian kids smile again

Takes more than medicine to cure a frown: Humanitarian organisation Clowns Without Borders has a mission

Does aid work always have to be serious? Do you have to be a doctor working on the frontline or an aid worker distributing food to refugees? David Clay, a clown from the US, thinks not.

Once a construction worker, Clay now volunteers for Clowns Without Borders, an international non-profit organisation that uses laughter to relieve suffering among children in refugee camps, conflict zones and natural disaster areas.

On May 30, Clay dressed up in his navy blue suit, crooked black hat and a polka dot tie to entertain 200 Syrian refugee children who are now living in neighbouring Lebanon. 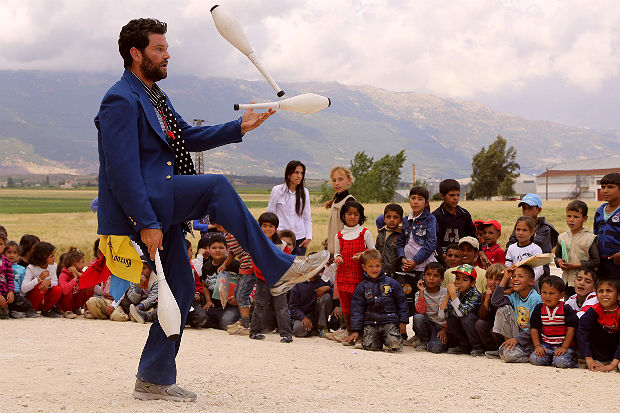 Clowns: Clay (above) and other members of Clowns Without Borders performing for Syrian child refugees, bringing cheer to the displaced youth in an encampment at Jab Janine, West Bekaa, in Lebanon. — Reuters 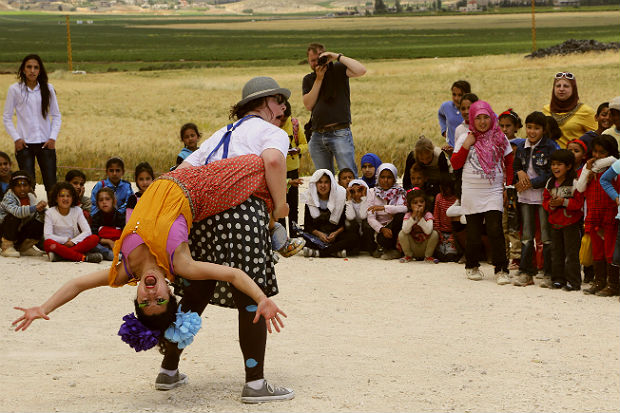 The tiny Mediterranean country hosts one million refugees, who have fled cluster bombs, chemical weapons and Al Qaeda militants in a war that has killed more than 160,000 in three years. Lebanon has not allowed official refugee camps, so many families live in unfinished buildings and wooden shacks.

Clay, along with three other clowns – another American, a Chilean and Lebanese – juggled, played instruments and acted like buffoons for the children, who first appeared withdrawn but started to cheer and clap as the performance unfolded.

Describing himself a humanitarian, Clay has worked in Indonesia, the Philippines and Haiti. In Haiti, where a 2010 earthquake killed more than 250,000 people, Clay said other aid groups were originally suspicious of his work, dubious of the results in a high stress situation with limited resources. 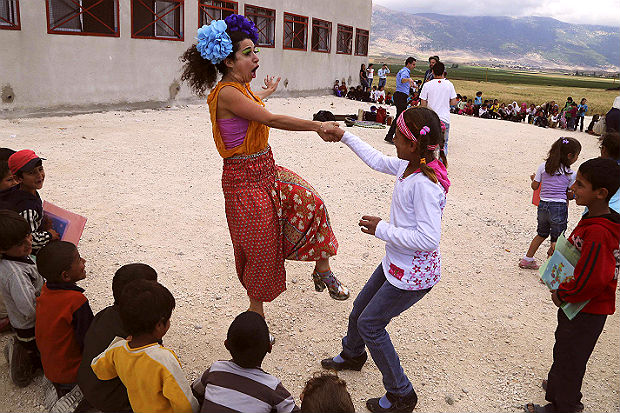 Make 'em laugh: Humanitarian organisations were skeptical when Clowns Without Borders first entered conflict zones. But after having seen the kids' positive response, they now welcome their joyous antics. — Reuters 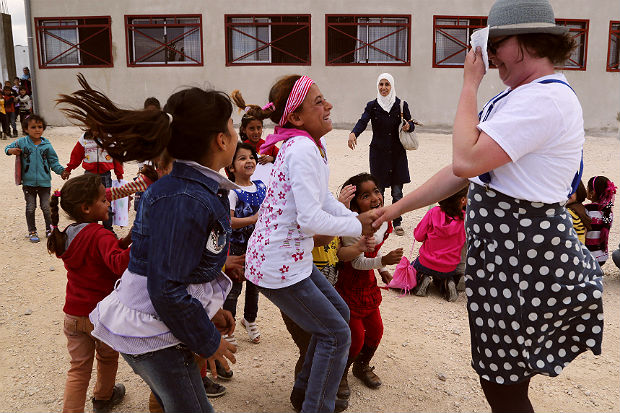 “Doctors were cold toward us. But their attitude changed distinctly,” he said, preparing for the show at a school in central Lebanon, multi-coloured handkerchiefs hanging out of his back pocket. “When the doctors heard those people laughing, especially in the children’s ward, they saw that it was the first time some of the children had reacted to anything at all after the earthquake.”

This trip is sponsored by Layan, a Kuwait-based aid group, and the team will take their stilts, Hula Hoops and blue trombone to camps across Lebanon during the next two weeks.

One million Syrian refugee children live in the region, millions are trapped by conflict inside Syria and public health researchers and aid workers say they are displaying symptoms of psychological trauma. Aid group Save the Children says one in three children it surveyed last year had seen a close friend or relative killed. Serious antics: Despite their unorthodox approaches and methods, the clowns — who have travelled around the world to areas affected by political conflict or natural disasters — prove that healing from trauma needs more than just aid. Laughter is just as important. — Reuters

During the singing and the dancing, Clay pulled a young boy, Ahmed, from the audience up from the crowd and gave him a wooden mop to ride like a horse around the dusty playground. The boy’s teacher said Ahmed was exceptionally shy in class and had fled from the Syrian city of Raqqa to get to Lebanon.

Raqqa has been repeatedly bombed by Syrian air force jets and is also a focal point of fighting between Islamic insurgent groups. Al Qaeda-linked fighters have carried out public executions in Raqqa’s main square.

Ahmed did not appear to like the attention as he followed Clay around the audience, but the other clowns asked the children to encourage him. A broad smile slowly filled his face and he picked up speed as his friends shouted: “Ahmed! Ahmed! Ahmed!” – Reuters

Dallas lawyer takes up mission to help people avoid eviction
This American third-grader holds food drives to help those in need
Heart and Soul: Interpreter was the bridge between Buddhist masters and community
Senegal’s wrestlers ready for combat after year-long wait
Malaysian B40 bakers earn extra money for Hari Raya through Cookies For A Cause
British-Norwegian couple offers shelter to migrants on Canary Islands
70-year-old Englishwoman wages war on plastic waste on Cornwall's beaches
Sweden's only female oyster diver finds calm at sea
US town lets people pay for meals in advance for the needy
This Malaysian offers relief to the underprivileged through food bank