In the swim of things: Diving instructor is a model of fitness at 62

Into the deep end: Age has not diminished Steffen Ng's passion for diving. At 62, he is loving every minute of his job as a diving instructor.

The sea is his playground, the beach is his home. Steffen Ng, 62, has truly found a place under the sun.

Steffen Ng turns up for our meeting in a casual T-shirt, Hawaiian shorts and sandals. Tanned and sporting a pony-tail, the six-footer is every inch an islander. Ng operates Steffen Sea Sports, a dive centre in Pulau Weh, an active volcanic island off Banda Aceh on the northern tip of Sumatra.

Having lived and worked on an island, Ng is used to running around in a pair of shorts and sandals. Needless to say, Ng, a diving instructor with the National Association of Underwater Instructors (NAUI), loves the sun, sea and sand.

He gives scubadiving lessons to tourists, both local and foreign. His two sons – Sebastian in his early 30s and Sylvester, mid-20s – run his other dive centre in Coral Bay, Pulau Perhentian Kecil off the coast of Terengganu.

“I’m called Pak Tua in Pulau Weh and Orang Tua on Pulau Perhentian,” he quipped, proud of his nicknames. At 62, Ng is a model of fitness and his active lifestyle could put a man half his age to shame.

Ng’s fascination with the sea can be traced back to his childhood days. He recalls how he used to stand on a stool and look through a neighbour’s window to catch an episode of Sea Hunt, a popular TV series. The then 12-year-old was mesmerised by the underwater domain (even though on black and white TV). The series starred Lloyd Bridges as Mike Nelson, a freelance scubadiver who took on perilous assignments. He salvaged objects from the sea and embarked on rescue missions. Ng briefing his students prior to their dive.


“Armed with only a knife, our hero was no match for villains. He easily fought off foes by pulling off their masks or mouthpieces,” Ng recalled.

As a young boy, he would steal away from his adoptive parents’ house in Tranquerah, Malacca, crossed the road and jumped into the sea. He even bought a pair of goggles, hoping to be a diver someday.

“I wore swimming trunks under my pants when I wanted to go swimming without my parents’ knowledge.

“Once, I stuffed my wet trunks in a tree hollow. A few days later, when I went to retrieve it, the termites had gotten to it first,” Ng recalled with a chuckle.

He also shared how he devised a way to catch shellfish.

“I would put kapur (Bahasa Malaysia for lime) in the bamboo clams’ hideout during low tide. The kapur would sizzle when it came into contact with sea water. The heat generated would flush the clams out,” said Ng.

After Form Three, he came to Petaling Jaya to work in a factory which made vacuum flasks.

“My pay was RM30 a month; food and lodging were provided,” he said. After six years, Ng decided to do something closer to his heart – he became a swimming instructor at PJ Swimming Pool.

“Swimming lessons were very cheap back then – RM20 for eight lessons,” Ng said. He later trained to be a lifeguard.

When he was 26, Ng took diving lessons under diving instructor Michael Tong, a pioneer in sport diving in Malaysia. (Tong is currently president of NAUI Pacific Rim).

“I trained to be a diver in then Mimaland and also worked with Tong for a few years. I filled air for the scuba tanks; I became such an expert at it that I could tell what was wrong with the compressor just by listening,” Ng shared.

Later, Ng took up a friend’s challenge and went to Sydney, Australia, for a diving course. He eventually earned his diver’s certificate. 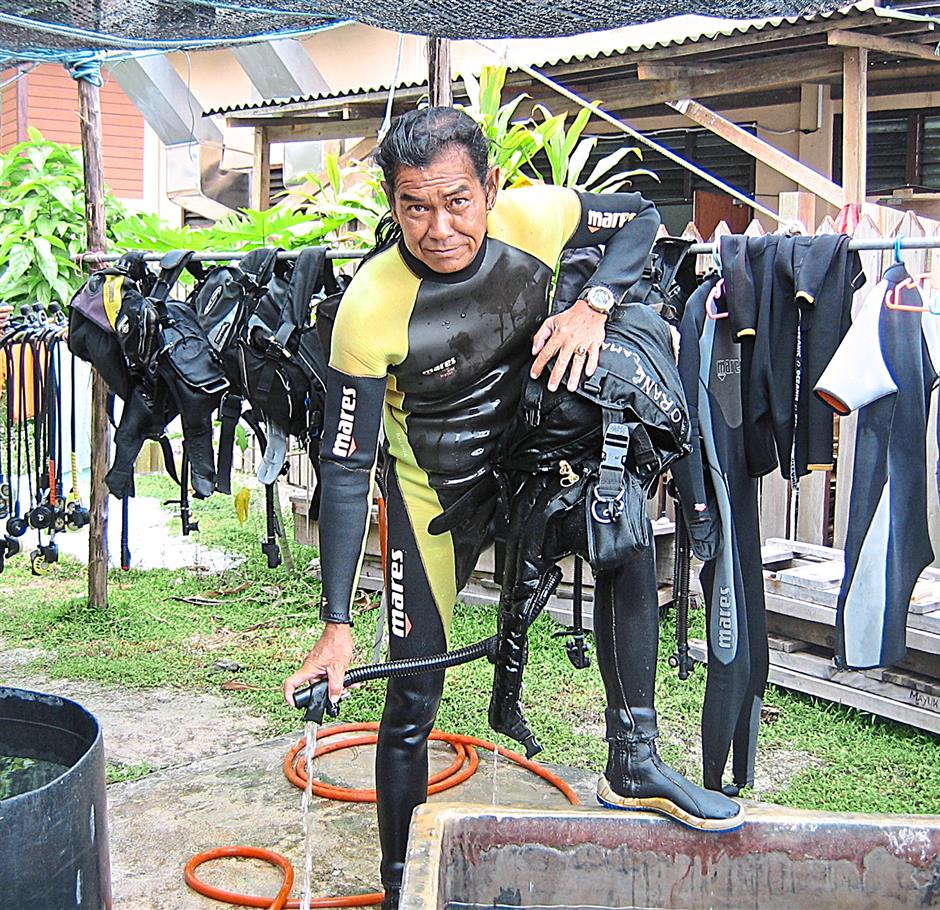 ‘The students’ lives are in your hands,’ says Ng, who takes his job seriously.


By the age of 30, Ng became an expert of sorts. He claimed he could dive to a depth of 30m to hunt for fish. (The haenyo or famed Korean women divers of Jeju and Udo Islands can dive up to 20m to harvest abalone, sea urchin, octopus and seaweed).

“When I’m preoccupied with my catch, I forget to breathe,” quipped Ng.

“My customers would tell me what fish they wanted to eat, and I would dive in with my speargun. I knew the hideouts of the fish,” he said, adding that he was once paid RM100 a day to hunt for fish in Pulau Tioman. That was in the late 1970s.

He boasted: “I’ve been called sui kwai (water ghost in Cantonese) for being an expert in hunting fish. No one could beat me. I would only surface when I caught fish.” He counted among his prized catch, garoupas which weighed 13kg.

Ng’s passion for his sport is palpable. He shared how he once celebrated his unusual catch by inviting seven tables of guests for a fabulous seafood meal at a restaurant. He had brought in his catch to be cooked in various styles.

“There were seven fish courses and we even had lobster fried rice. What a sinful meal!”

Ng has since stopped hunting fish as he does not want to run foul of the law.

“Besides, I wanted to remain a legend by retiring at the peak of my ‘career’ as an expert fish hunter,” Ng said in jest.

Ng also claims to be among the first to frequent Pulau Tango off Dungun, in the 1970s. Among the Terengganu islands, Pulau Tango is furthest away from the coastline. Back then, divers were heading to Pulau Redang (Terengganu) and Pulau Tioman (Pahang), but he was going for dives in Pulau Tango every week. Ng’s dive centre in Pulau Weh off Aceh in Sumatra. The centre has three chalets which can accommodate
17 people.


“At that time, people said the island was haunted but I was fearless. I camped and dived there. It was beautiful back then,” Ng reminisced, adding that he heard that the boat people also landed there. An hour’s boat ride from the jetty at Kuala Dungun, Pulau Tango’s shielded bay was home to beautiful coral gardens and the island was a favourite among divers.

“Pulau Tango was my playground, I knew every inch of it back in the 70s and 80s. Those days, the island was like the second Sipadan. Now, I don’t go there anymore. The reefs are gone,” said Ng, who still owns a 1.2ha plot on the island.

Ng later explored Pulau Perhentian, 19km off the north-eastern coast of Terengganu. Happy with his find, Ng set up his first dive centre on the island. That was back in 1991. In those days, there were no speedboats, only the slow boat. Ng’s centre housed a tiny office, a storeroom and a restaurant. Ng was content to sleep in a hammock.

“Two months after I set up my dive centre, tourists started trickling in. Now, there are more than 10 dive centres on the island.”

Ng’s fond memories include helping to organise an underwater wedding for a German couple in 1993. A year later, he organised a treasure hunt which was well-received by participants, some of whom came from abroad.

When Ng set up his dive centre in Pulau Weh in 2007, there were already other operators before him.

The first two years were tough. Ng paid a contractor to build his centre, but the contractor absconded after erecting four poles in the ground. Ng had to live in a shabby shack.

“More tourists from Malaysia are coming to the island. Now, I have seven trained local workers to run the centre in my absence,” said Ng, who has to leave the island every two months when his visa expires.

“As a dive centre operator, some divers give me suggestions on how to improve my school and I appreciate that. I don’t sell myself (and my dive centres), but other divers promote my centres (through postings on social media),” said Ng.

The kid who once dreamed of being a diver, is now living his dream life. He enjoys recceing for diving spots for his two dive centres.

“Any dive is a good dive for me,” Ng said. He makes no guarantee to divers that they can see certain marine creatures (like sharks and manta rays) on their dives. Personally, he prefers the element of surprise. That way, the divers would not have too high expectations.

One of his awesome dives was swimming with barracudas in Sipadan, off the east coast of Sabah. Apparently, it is a diver’s dream to be in the vortex of a tornado of barracudas.

“These fishes surround you like a tornado and would break away (to leave the diver alone) when the leader of the pack swims off,” he recounted.

Ng loves his job and stresses that a diving instructor should take his job seriously.

“The students’ lives are in your hands,” he said.

And Ng is serious when it comes to punctuality. He expects students to turn up punctually for their lessons. Imagine handling 40 divers a day. Delays will mess up boat schedules.

“You can’t be late to catch a flight, can you?” Ng reasoned. “If everything is on schedule, everyone can look forward to a fun dive.”

Ng loves life as an islander.

Ng is a happy man, indeed. He has found his paradise on earth, his island in the sun.